The following is a guest commentary by an historic leader of the revolutionary movement in the Dominican Republic. Translation: John Catalinotto

It seemed, not only that [Luis Inácio Lula da Silva] Lula was going to win, but also that he was going to win comfortably in the first round. That did not happen, and that is regrettable, because of the risks that a second round always implies, despite the five-point lead. 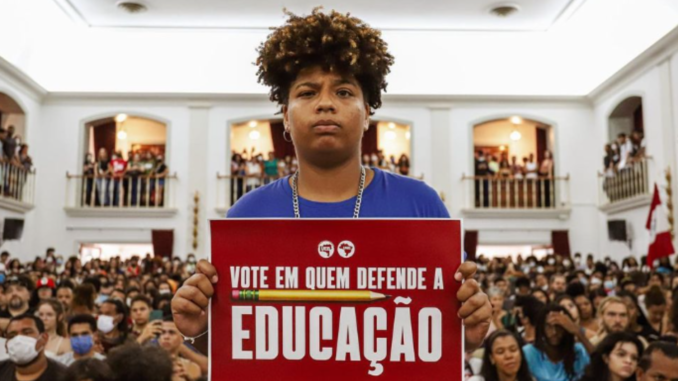 The battle for education rights is only one of the struggles against the Bolsonaro regime. ‘Vote for defenders of education’ reads the poster.

Neofascism, when it captures large masses, is extremely dangerous; and if its previous victory has been a tragedy, it would be even more so if it manages to continue usurping the government on the basis of strengthening all conservative fundamentalisms.

Brazilian society and Nuestra America [Our America] deserve Lula to be their next elected president and all their petista [Workers Party] and democratic forces, all their social and cultural energies, should be fully employed to achieve it in this second opportunity. They deserve it to stop the tragedy and chaos and to open new routes to less degrading stages.

Jair Bolsonaro is a spawn of the crisis of decadence of world capitalism and of the Western imperialist system in its Brazilian expression.

He is the Brazilian Trump, without excusing Biden, who in terms of international warmongering is as cruel and grotesque as the former, if not more so.

In Bolsonaro is condensed reactionary militarism, religious fundamentalisms, racism, machismo, homophobia, the fiercest factions of lumpen bourgeoisie, hard-core neoliberalism, ecocidal greed . . . and even undiscovered conservatism; all this combined with a good dose of cunning and audacious stupidity.

Bolsonaro is a full-fledged neofascist, joined to this current in the world. He is a growing danger.

Lula is something else.

He is neither a Biden nor a Trump.

He is no longer a revolutionary or transforming leftist.

He was not during his administration.

He is not what he was.

He stopped being critical of capitalism.

Some time ago he renounced socialism, as did his Articulation Current within the Workers Party (PT).

The PT is a moderate variant of the so-called progressivism and continental independentism, located between center and center-left positions.

It assumes a line for a State that favors a less unfair distribution of income, to some extent capable of counteracting extreme poverty and unproductive latifundia, with public policies impregnated with a bold welfare program and valuable initiatives against racist, sexist and age discrimination.

Even in this context, welfare is extremely vulnerable and avoids more stable solutions that are more in line with qualitative development and the rights of human beings.

In simple terms: It is the difference between giving away fish and teaching how to fish, or between temporary handouts that encourage parasitism and decent jobs or decent self-employment.

On another level, Lula is a defender of the democratic spaces conquered and a supporter of the new independence of Our America.

In his governmental role, he took on important levels of Brazilian and Latin Americanist self-determination, in the interest of strengthening the autonomy of the emerging Brazilian imperialism and of allying himself with blocs not under the tutelage of the United States. His contribution to the formation of the BRICS alliance [the developing countries of Brazil, Russia, India, China and South Africa] has been very positive.

An ally of the varied continental progressive range, without joining the ALBA [Bolivarian Alliance for America] bloc, he was able to defend Cuba, Venezuela and Bolivia from imperialist aggressions and blockades and to strengthen solidarity and mutual cooperation with those brotherly countries and their heroic peoples.

Lula promoted and contributed to consolidate the BRICS space, together with other large states not aligned with the U.S. and the European Union.

A victory for Lula, PT and allies significantly expands the bloc of countries not subordinated to the U.S. strategy of domination and war.

It strengthens the BRICS.

It reduces and weakens the influence of the right wing and extreme right-wing rulers of the continent.

It helps to open new routes of change and favors the contested social movements and the grassroots church in Brazil.

It weakens conservatism inside and outside the country.

For all these reasons, in the face of Bolsonaro’s continued power, Lula and his PT should be preferred a million times over.

I reiterate: I have no doubts about the imperious need for all the PT and the democratic and anti-fascist forces of Brazil and of Our America to multiply our efforts to guarantee his victory in the second round.

Mistakes that should not be repeated

I take this position in spite of the past mistakes made by Lula and the high leadership of the PT, among which, due to the lessons they teach, it is valid and opportune to recall the following:

It is our conviction that in the case of Lula, none of these questioned aspects were due to personal corruption but rather to bad alliances, maneuvers and political concessions that weakened his image and exposed him to false accusations and perverse plots, which were finally defeated.

We hope that Lula will reflect on the inappropriateness of these initiatives and political attitudes, so that his new administration will be free of them.

We hope that precisely when another imperialist military intervention against the self-determination of the Haitian people is underway, he does not make the mistake of committing Brazil to this unworthy adventure.

I insist: It is extremely important that Lula, his people and the forces in solidarity with his anti-fascist struggle push aside Bolsonaro and what he represents.

Brazil, Our America and the world deserve it!