British railway workers demanding wage increases to keep pace with decades-high inflation have spearheaded a wave of industrial job actions across that country since this summer. 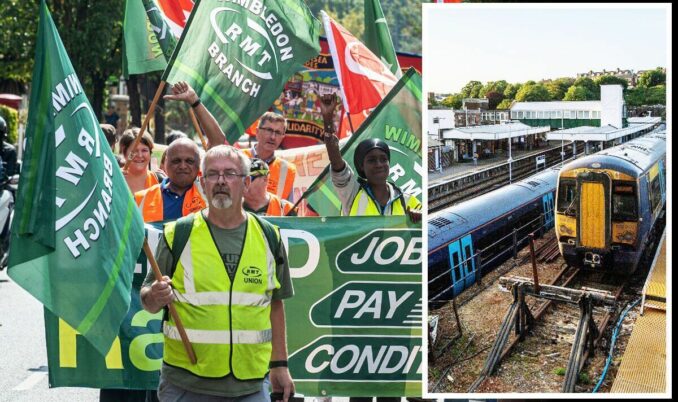 Their strikes brought a nearly complete shutdown of the rail network, coupled with a national strike by 115,000 postal workers and industrial actions at the country’s largest ports in Liverpool and Felixstowe on Oct. 5.

The rail unions have been staggering and dividing industrial actions since July, with demands targeting assaults on pay, jobs, and terms and conditions of employment. Over 21,000 train drivers are members of the Associated Society of Locomotive Engineers and Firemen (ASLEF), which represents workers in passenger and freight train operating companies, the London Underground and some light-rail services.

During the COVID-19 pandemic, train operating companies were given 16 billion pounds of public money, equivalent to $17.82 billion. Meanwhile workers have been denied pay increases for three years, even as inflation has risen over 12.3%.

The wave of strikes was fueled by the Tory government plans to reprivatize the rail system as the “Great British Railways,” which would involve 2 billion pounds worth of cuts in jobs and services.

Over 9,000 train drivers at 13 train operating companies joined the Oct. 5 national strike action, calling for wage increases after three years of a government-backed pay freeze. That national strike by ASLEF was the fourth work stoppage since the summer and the largest by train drivers in 25 years. ASLEF drivers have been joined by 40,000 signalers and crew represented by the National Union of Rail, Maritime and Transport Workers (RMT) and members of the Transport Salaried Staffs’ Association (TSSA). Another day of strikes was planned for Oct. 8.

The strikes have been the rail sector’s biggest work stoppages in decades, and more are expected. The series of one-day strikes by railway workers have led to a wave of industrial actions across Britain by workers in legal services, ports and telecommunications in recent months.

Protests over the cost-of-living crisis brought out over 100,000 people in over 50 British cities Oct. 1. The massive mobilizations were against the Tory government (Conservative Party) for its failure to tackle the ongoing economic crisis, which has left millions of working people dealing with pay cuts coupled with an all-time high rate of inflation. On Oct. 2, unions and leftists participated in a demonstration called People’s Assembly Against Austerity outside the building where the Conservative Party was holding a conference in Birmingham.

The demonstrations included members from all the major trade unions in Britain, including RMT, ASLEF, Communication Workers Union, the Junior Doctors movement and cadres from several left parties. At the protest rally at King’s Cross in London on Oct. 1, RMT leader Mick Lynch said, “We’re going to create a mass movement of working people. We’re going to change this country and win for our people.” (People’s Dispatch, Oct. 3)

Lynch is one of the initiators of the “Enough is Enough” movement, organized in early August to address the growing fuel crisis that threatens to leave millions without heat this winter. The campaign has support of Labor Party politicians, including MPs Zarah Sultana and Ian Byrne.

While sanctions against Russia imposed by the EU and the U.S. and the ongoing war in Ukraine have exacerbated the soaring fuel prices, workers point to profiteering by multinational energy producers and suppliers for making matters worse. The campaign is demanding a real pay increase, major cuts in energy bills, an end to food poverty, decent and affordable housing for all and taxing the rich.

The railway strikes are taking place against a background of increasing financial crisis and chaos under the leadership of Britain’s new Prime Minister Liz Truss, who took over from Boris Johnson in September. The new British government is proving to be an economic disaster — symbolic of a global political crisis.

Shortly after taking office, Truss unleashed a currency and bond market crisis, when she proposed a budget that contained $48 billion in tax cuts for high-income earners. She promised to borrow money to fund the cuts, potentially putting pension funds and national health care at serious risk.

Truss’s mini-budget sent the pound to historic lows and sparked further market chaos. With Britain’s public debt already at 100% of GDP, something has to give.

The rich in Britain, as in other capitalist countries, get richer. Weapons manufacturers and energy companies are making record profits. Meanwhile, working people can’t afford to heat their homes or put food on the table. It is no wonder that the strength of the railway strike movement is growing and spreading to more industries.

Following the flu pandemic in 1918, there was a general strike in 1926. Are conditions ripe for that today? Time will tell.