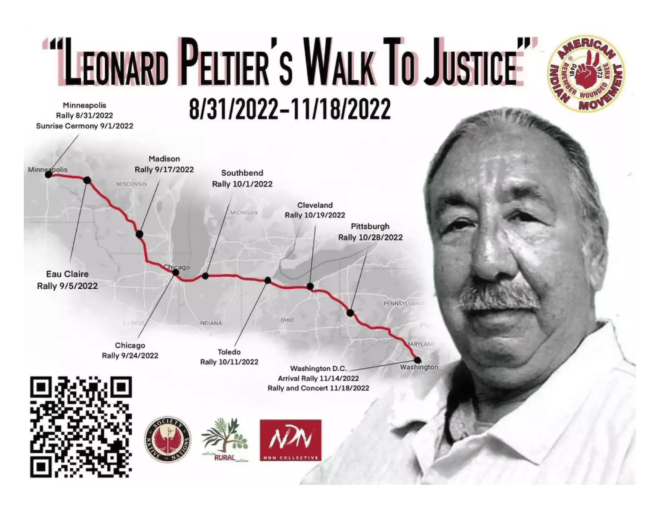 The LA Sentinel reported Aug. 11 that the American Indian Movement (AIM) had called the 1,100-mile march through eight states. Frank Paro, AIM Grand Governing Council national chairperson, said, “The purpose of this walk is to raise awareness to the case of Leonard Peltier, who was wrongfully convicted in 1977. Leonard’s attorneys petitioned President Biden to grant him clemency, so that he may not die in prison for a crime he did not commit. So, please pray for Leonard’s health and that his prayers are answered for clemency based on compassionate grounds.”

The AIMGGC held a rally Aug. 31 in Cedar Field Park, Minneapolis, to launch the march. The Walk to Justice is planned to arrive Washington, D.C. on Nov. 18. Rallies are planned in cities along the way. (See map: tinyurl.com/43du3dv4)

Organizer Rachel Thunder told Native News Online: “The walk and prayer for Elder Peltier has been heartfelt, heavy and healing. Our walkers are out every day at 5 a.m. to make sure the 20-plus miles are covered to get this message to Washington, D.C., to free Leonard Peltier. As AIM, we are asking for justice — Justice for Leonard Peltier and justice for our people as the original people of Turtle Island.”

Indigenous political prisoner Leonard Peltier, a member of the Turtle Mountain Band of Chippewa Indians, turned 78 years old Sept 12. Peltier is recognized around the world as a political prisoner; he was nominated for the 2007 Nobel Peace Prize. In violation of its own statutes, the U.S. government has repeatedly refused him parole.

The U.S. suppressed hundreds of thousands of pages of documents which would indicate Peltier’s innocence, including ballistic evidence, in a 1975 shoot-out at Pine Ridge Reservation in South Dakota. Two FBI agents opened fire on a tiny village, while children, elders and adults slept in their homes. In the resulting firefight, a Native man and the two agents died. U.S. prosecutors publicly admitted that they do not know who actually fired the shots that killed the agents.

“The day of the shoot-out in 1975, the FBI created a narrative that some super soldier killed two FBI agents,” Dr. Nick Estes of The Red Nation said to the Minneapolis rally. “They don’t tell you that the vast majority of people at that shootout were under the age of 18.” (tinyurl.com/3pcc6rsv)

The U.S. Department of Justice’s suppression of a massive amount of evidence in Peltier’s favor was done in order to extradite him from Canada, even though his two co-defendants, Bob Robideau and Darrell Butler, had been acquitted on grounds of self-defense. (freeleonard.org/case/)

An international effort grew to seek legal clemency in 1993, after all court venues to obtain his release were exhausted. In 1994 the FBI issued a memorandum outline to counter that campaign, according to Leonard Peltier Defense Council spokespersons.

Former U.S. Attorney General Ramsey Clark used blunt words to describe Peltier’s trial and conviction: “There was no evidence that he did it, except fabricated, circumstantial evidence, overwhelmingly misused, concealed and perverted.”

Clark said in a speech in 1997 that Peltier “should have never been in there in the first place — never. While Leonard Peltier is in prison, we all are.” (tinyurl.com/y32wm9ju)

Former U.S. Attorney James Reynolds, who was the government’s prosecutor in Peltier’s trial, sent a letter to President Barack Obama to urge clemency. In the letter, Reynolds argued for granting Peltier’s clemency petition “as being in the best interests of justice considering the totality of all matters involved.”

Peltier suffers from diabetes, high blood pressure and a heart condition. The time for justice is short.