Over 100 Indigenous activists and allies marched through Boston Oct. 8 to demand the state of Massachusetts abolish Columbus Day and instead recognize the second Monday of October as Indigenous Peoples Day. 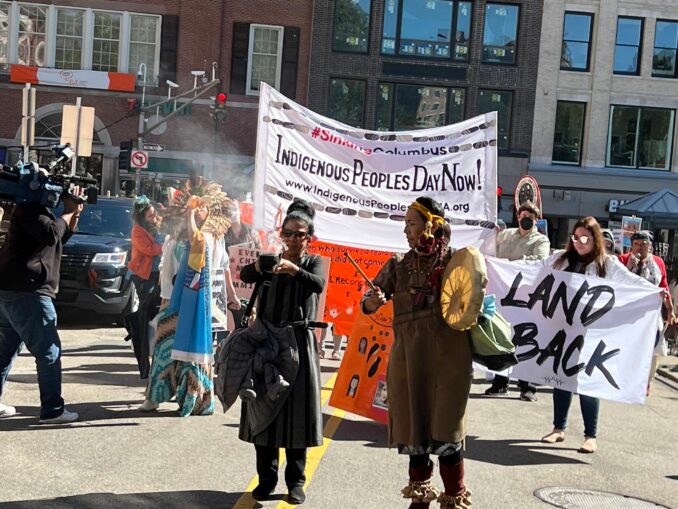 Today’s action was part of a decades-long, Indigenous-led movement to end the racist glorification of Christopher Columbus, whose 1492 voyage to the Caribbean began the ongoing settler-colonial genocide of Indigenous peoples in the Americas and shortly afterward led to the opening of the trans-Atlantic trade in enslaved peoples. The action was organized by United American Indians of New England (UAINE), the North American Indian Center of Boston (NAICOB), Cultural Survival, the New Democracy Coalition and Italian Americans for Indigenous Peoples Day.

Speaking on the Boston Common, Mahtowin Munro, co-leader of UAINE, denounced Boston Mayor Michelle Wu, who just the day before “caved in to racism,” by declaring Oct. 10 as “Italian American Heritage Day.” (UAINE on Twitter @mahtowin1)

The movement for Indigenous Peoples Day had scored an historic victory when on Oct. 6, 2021, Mayor Kim Janey, Boston’s first Black and first woman mayor, signed an executive order declaring “the second Monday of October every year to be Indigenous Peoples Day . . . in lieu of Columbus Day.” (tinyurl.com/ycxfhb2s)

As Munro and other speakers emphasized at today’s action, the cowardly and insidious attacks this week, by Democratic politicians from President Joe Biden to Wu against full Indigenous Peoples Day recognition, cynically replaced Columbus’ murderous actions with “Italian heritage.” This underscored the need for the Massachusetts Legislature to pass bill H.3665, which would establish Indigenous Peoples Day as a statewide celebration. (indigenouspeoplesdayma.org)

Jean-Luc Pierite, president of NAICOB, put it clearly to the assembled media: “Sign the bill that says Indigenous Peoples Day replaces Christopher Columbus Day! Repeal any form of Italian American Heritage Day that is on our day!”

Munro urged the Massachusetts Legislature to ban racist Native mascots for sports teams, to create Indigenous curriculum content for Massachusetts public schools and to protect Native funerary objects and other sacred articles from desecration. These demands are embodied in proposed state House and Senate bills: “An Act prohibiting the use of Native American mascots by public schools in the Commonwealth”; “An Act relative to celebrating Native American culture and history”; and “An Act to protect Native American Heritage.”

As Indigenous activists occupied the Massachusetts State House front entrance, they called for the full restitution of Indigenous lands and sovereignty.

“The destruction of our people started here,” said Raquel Halsey, Executive Director of NAICOB and a citizen of the Mandan, Hidatsa and Arikara Nation. “We want our land back. It’s more than Indigenous Peoples Day; it’s access to tradition. We fight for reproductive justice, our language, our children.”

Other speakers demanded justice for the thousands of murdered and missing Indigenous women, girls and Two Spirits (MMIWG2S) in the U.S. and Canada and stressed the importance of solidarity between the Indigenous peoples of Turtle Island and the Palestinian people in their struggle against the Zionist settler-colony of Israel.

At the close of the rally, protestors marched from the State House to Faneuil Hall carrying banners and chanting “Indigenous Peoples Day now!” They demanded the name of the hall be changed; Peter Faneuil was a trader in enslaved people.

The marchers performed a Round Dance to commemorate Indigenous Peoples Day and to honor the ongoing resistance of Indigenous nations in combatting settler-colonial genocide and in struggling for self-determination.