This article was published Sept. 29 in Avante, the newspaper of the Portuguese Communist Party, in which the author contributes analytical articles, often about imperialist militarism. Translation: John Catalinotto. 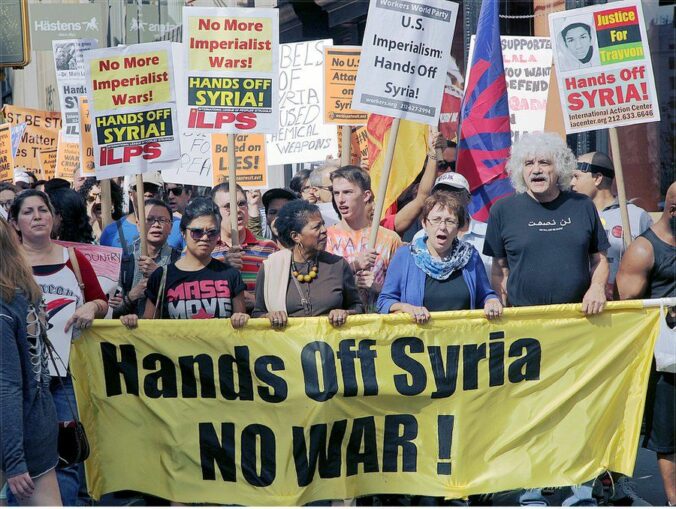 If hypocrisy and lies paid taxes, the speeches made by the leaders of the U.S., the EU and Britain at the recent United Nations General Assembly would have eliminated their colossal public debts. It is amazing how those responsible for practically all the wars and aggressions of the last three decades (at least) present themselves as pure innocents, demanding rights, the U.N. Charter and the sovereignty of the peoples, the same peoples they crush every day with their actions.

The Portuguese Communist Party (PCP) refuses to be an apologist for the global confrontation that the United States and NATO have prepared for a long time, against Russia and China or for the suicidal policy of sanctions that destroys the European continent to serve U.S. imperialist interests.

These leaders speak as if the Russian military intervention in the war in Ukraine acted as a detergent to wash away their endless crimes and the rivers of blood they have caused to flow all over the world, in the recent and not so recent past. They talk as if the offensive by the U.S. and European powers to impose their domination over the entire planet is not at the root of the extremely dangerous crisis that humanity is facing today. They lie to hide the reality. And they censor in an increasingly open way to try to sustain the lie.

What these leaders advocate and organize is not peace but a direct confrontation with a great nuclear power (Russia) and the most populous country on the planet (China). The danger of a catastrophe unprecedented in human history is very real, but the leaders of the U.S./Britain/European Union are not just playing the lyre; they are constantly blowing to fan the flames they have ignited.

Pelosi’s visit to Taiwan and the instigation of the ongoing escalation illustrate the old technique of throwing the stone, hiding the hand that threw it and blaming others for the damage.

U.S. plans for confrontation and war are nothing new. More than 20 years ago, General Loureiro dos Santos [former head of the Portuguese Armed Forces and an author] formulated them in an interview to Diário de Notícias (March 13, 2000), to which the newspaper dedicated the headline: “World war is inevitable.”

At that time, 2000, the planetary hegemony of the United States was uncontested. Putin had just come to the presidency of a Russia on the brink of collapse after years of economic dictates from the U.S. China’s current President Xi Jinping was the leader of a local area in a country that had not yet made its great economic leap.

Nevertheless, Loureiro dos Santos had already foreseen that “it is natural that other powers will emerge [. . .] that will have the capacity to oppose or challenge the United States. And the United States will need to act. That won’t be right away; but in 15, 20 years, it’s almost inevitable.”

The U.S. “will need to act,” not because it is the victim of any aggression but to prevent anyone from being able to “oppose” or “challenge” its planetary dictatorship. And act how? Loureiro dos Santos, who through his duties surely knew the prevailing thinking in the U.S. and NATO, explicitly foresaw a war “in 20 years.”

Three years before the Russian intervention in the war in Ukraine, another high-ranking Portuguese officer, Major General Carlos Branco [known as a political general who served in international organizations], warned of the danger of a global confrontation: “The situation we are experiencing bears little resemblance to the Cold War. We are already in a more advanced phase of confrontation that is reflected in the militarization of speeches and political agendas. . . . A new war that could end life on Earth is becoming increasingly likely and must be prevented.”

There is an intense campaign around Putin’s statements about nuclear weapons, which have been misrepresented but cannot leave all those who understand the seriousness of the current situation indifferent — and it’s worsening.

But it is worth recalling that in 2017, Major General Branco wrote: “British Defense Minister Michael Fallon has admitted the possibility of a preemptive nuclear strike against Russia. . . . There is no memory during the Cold War of senior officials of the major powers threatening their opponent with preemptive nuclear strikes or the audacity to violate their diplomatic premises,” in a reference to the hijacking of a Russian consulate in the U.S. in Trump’s time.

In his 2020 book, General Branco discussed the new U.S. military doctrines, how they aimed at nuclear supremacy and broadened the conditions allowing the use of nuclear weapons. He wrote: “The tactical nuclear option was also intended for regional confrontations, against Iran and/or North Korea [. . .] where conventional interventions are considered inadvisable.”

One is reminded of the article by [President Bill] Clinton’s former Defense Secretary William Perry and Deputy Defense Secretary Ashton Carter, who in 2002 wrote, euphorically, about how in 1994, “we prepared plans to attack North Korea’s nuclear facilities and to mobilize hundreds of thousands of American troops for the war that was likely to follow.” (Washington Post, Oct. 20, 2002) Nicholas Kristof spoke of “secret and frightening plans,” where “there is even talk of using tactical nuclear weapons.” (New York Times, Feb. 28, 2003)

The U.S. attack never materialized, because the then-President of South Korea, Kim Young-Sam, unlike Zelensky, was unwilling to sacrifice his country to U.S. hegemonic designs. (France Presse, May 24, 2000; Avante, Jan. 22, 2015)

General Branco also said of the dangers of the new U.S. military strategies: “In a context in which the dominant power sees its leadership threatened, it is not a mere figure of speech to consider the possibility that the United States employs violence to halt the rise of its competitor. There are several indications that lend credence to this hypothesis. . . . One wonders at the silence of Trump’s critics on this central issue, while they consume their energies on peripheral issues of dubious importance.”

The reasons for this silence are plain to see; the objective of imposing the U.S. planetary dictatorship by force is not exclusive to Trump. It is shared by the entire U.S. ruling class.

That fact has long been evident. Remember NATO’s war against Yugoslavia in 1999. This was an illegal war of aggression. It violated international law, redrawing the borders of Europe and violating everything else that is now proclaimed to not only be unacceptable but must be fought even at the cost of global war. It was a war unleashed by NATO at the height of U.S. unipolar hegemony, accompanying the first of successive expansions of NATO toward Russia. In this war, the U.S. bombed the Chinese Embassy [in Yugoslavia].

This war showed that the end of the “Cold War” represented the beginning of a new phase of planetary expansion of imperialism, with the U.S. at the head and (hot) war as the central tool. This war was led by the Democratic Party in the U.S. (Bill Clinton) and the social democracy (and German “Greens”) that then governed in most European countries. This included, in Portugal, a Socialist Party (PS) government, then headed by António Guterres, current U.N. Secretary-General.

The current media offensive is ferocious. As always happens with war propaganda, it is based on lies repeated a thousand times until they become “truth” in the heads of those who listen.

Whoever heard [President Joe] Biden at the U.N. will find it hard to believe that he was talking as the president of the country that has unleashed the most wars and aggressions; that has destroyed the Middle East, North Africa, the Balkans, Vietnam, Korea; that systematically organizes coups, subversions and blockades against those who do not submit (such as Venezuela, Bolivia, Cuba or Brazil); that has more than 750 military bases in some 80 countries (Al Jazeera, Sept. 10, 2021); that has the largest military budget on the planet (even without counting the CIA and other agencies); that thinks it has the right to appoint “presidents” of other countries (such as Juan Guaidó in Venezuela).

The U.S. is the only country that has ever used nuclear weapons. It has a long history of using chemical and biological weapons.

Lying accompanies every war of U.S. imperialism: in the colonization and extermination of the Indigenous peoples of North America; in the “sinking of the Maine,” which marked the beginning of U.S. overseas expansion; in the Gulf of Tonkin fraud (Pentagon Papers), which was the pretext for 1964 escalation of the war in Vietnam; in the nonexistent “genocide” to justify the war against Yugoslavia; in the well-known nonsense about “Saddam Hussein’s weapons of mass destruction.”

The extensive list includes the lies of the U.S. president to justify his atomic crime against Japan. In his speech on Aug. 9, 1945, [President Harry] Truman said: “The world will record that the first atomic bomb was dropped on Hiroshima, a military base. This is because we wanted, in this first attack, to avoid civilian deaths as much as possible.” (Truman Library recording)

What the world took note of was that President Truman (whom Biden evoked in his speech before the U.N.) blatantly lied. The atomic bomb was dropped on downtown Hiroshima, a city of 250,000 people. At least 70,000 people died immediately, the vast majority of them civilians. Three days later the U.S. dropped another atomic bomb on another city, Nagasaki. No U.S. president has ever condemned these crimes.

For lies to prevail, you also need to silence information. That is why censorship and intimidation are widespread. The regime’s media is more and more mere propaganda. It has hidden the role of the fascists in the coup in Ukraine, the repression of its opponents, the Odessa massacre in May 2014 and the eight-year war of the Kiev regime on the people of the Donbass.

Julian Assange, persecuted since 2010, is being held in a maximum security prison in Britain, not for committing or preparing any act of violence but for spreading on WikiLeaks the truth about the lies of U.S. wars. Facebook and other antisocial networks are increasingly censored and directly controlled by the secret services. (mintpressnews.com, July 12) The EU bans television channels. A judge has just decreed that the U.S. Senate report on torture in CIA concentration camps will be kept secret, because it “compromises national security.” (Los Angeles Times, Sept. 15)

The ferocity of the attacks on the PCP is part of this campaign. The PCP is attacked, not for being “Putinist” (which it is not) or for supporting the war in Ukraine (which it does not support), but for not agreeing to be an apologist for the global confrontation that the U.S. and NATO have long been preparing against Russia and China nor for the suicidal policy of sanctions that destroys our continent to serve U.S. imperialism.

We are faithful to the example of the founders of our communist movement, who refused to support the disaster that their governments were preparing more than 100 years ago [World War I]. There are others who choose to serve the path of disaster.