Participants made an altar with photos, food and the traditional cempasuchil flowers. One of the photos was of Berta Caceres, the Honduran environmental activist and Indigenous leader assassinated in 2016. Another photo was of longtime Native political prisoner Leonard Peltier.

Hosted by the Brown Berets de Southeast Texas, the multigenerational crowd gathered at Chicano Parque, aka Moody Park, to honor the Indigenous people who have lost their lives protecting land and water. 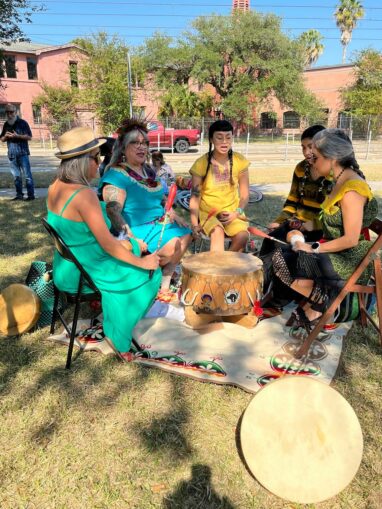 The all-woman group, Cancega Xicas Unidos, drummed and sang numerous songs in different Native languages. One song they sang in the language of the Lakota people was “Why We Do These Things.”

Johnny Torres, a published poet and member of the Berets, read several poems, including one about his uncle, Joe Campos Torres, who was murdered by Houston cops in 1977, and one entitled La Llorona (The Weeping Woman). 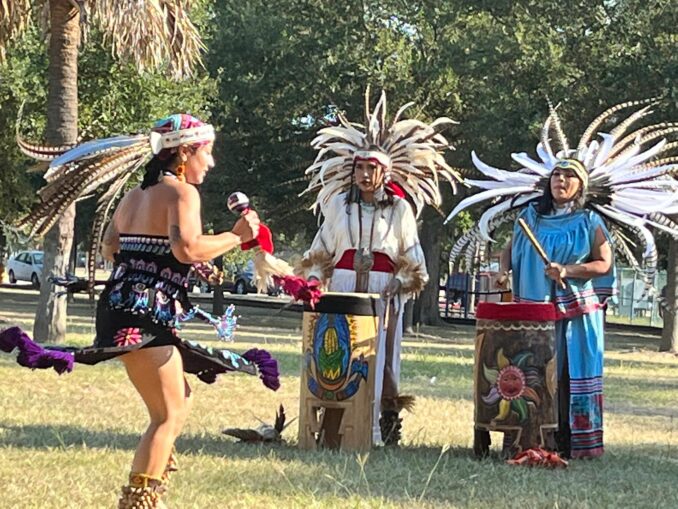 Houston’s Aztec Dancers, in their stunningly beautiful Native dress with colors that came alive in the light of the afternoon sun, danced and drummed for over 30 minutes for the delighted crowd.

A speaker gave a report about political prisoner Leonard Peltier and the Walk to Justice from Minnesota to Washington, D.C.,Peltier’s supporters are journeying to demand the U.S. government grant clemency for this leader of the American Indian Movement, who has been wrongfully imprisoned for 46 years.

As the event was ending, every person present was given a live cempasuchil plant to take home. The plant’s name is from the Nahuatl (Aztec) language; in Mexico it is believed that the petals of this flower form an orange-carpeted path that guides souls on the Day of the Dead.

For more on “Leonard Peltier’s Walk to Justice” visit the facebook group of the same name and workers.org/2022/09/66785/. Sign a petition for Peltier’s freedom at Chng.it/xChWLc5vT6. Watch a presentation on the case at youtu.be/Me1MiqRECfA.