The author is editor of the Portuguese Marxist webzine jornalmudardevida.net, where this article was published Sept. 30. Translation: John Catalinotto.

One hundred years after Mussolini took power, fascism is once again governing Italy. For weeks before the election, Giorgia Meloni’s expected victory drew no comments from European leaders, and it seemed that they all saw it not only as inevitable but also as normal and acceptable. 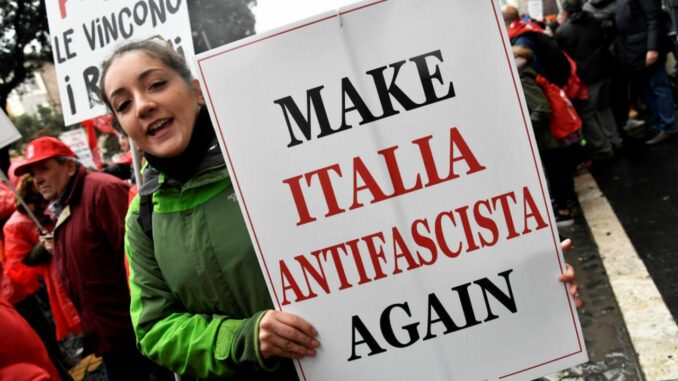 Only on the eve of Election Day, the Eurocrats’ spokeswoman Ursula von der Leyen decided to issue a warning, as useless as it was stupid, brandishing the threat of sanctions if Italy’s new leaders did not play by Brussels’ rules.

A new balance of power

This fascist victory has a different quality from the victories won in recent years by the extreme right in Europe. This time, it was not the ordinary right, more or less extreme, that took smaller fascist parties in hand in order to obtain the majorities necessary to govern. It was the opposite — the Brothers of Italy (who are open admirers of Mussolini) dragged behind them another fascist party, the Northern League [now called the League] and the extreme right of Forza Italia [Silvio Berlusconi’s party].

The balance of power between the right and fascism was inverted, to the point that the ordinary right was now dispensable for the fascists to gain access to the government.

The victory in Italy followed by a few days another victory of a party of Nazi background in Sweden, one of the much praised homelands of European social democracy.

Not to mention that in France almost half the electorate voted for [pro-fascist] Marine Le Pen a few months ago; that Austria has remained governed by the extreme right for some years now; that in Netherlands the second parliamentary force is the extreme right; that in Portugal and Spain, parties admiring António de Oliveira Salazar and Francisco Franco [fascist dictators in those countries for decades in the mid-20th century] have gained strong popular support and parliamentary representation. Et cetera.

Far from being episodic and localized, the movement is widespread and seeks hegemony in Europe.

The silence of the European leaders is understandable.

Those who hold out their hand to the extreme right in order to stay in government, those who unabashedly adopt parts of their extremist programs to capture votes, those who use elections as a mere formality to legitimize a political power that is really based on the power of money, have no moral right to criticize fascists when the fascists take the bit between their teeth and rise to that same power in electoral processes as normal as any others.

Those who use Nazi shock forces to bring Ukraine into their orbit, those who fuel an endless war disposing of people’s lives and imposing unacceptable sacrifices on them, those who paint Vlodymyr Zelensky’s fascist regime in the colors of democracy and freedom, have no political standing to attack fascist parties wherever they raise their heads threatening to subvert democratic regimes.

The mainstream voice of the powers that be has used the easy argument that it is the “autocracies” (taken, of course, as alien to the “Europe of democratic values”) that are the promoters of the European far right — in particular Putin’s Russian regime is blamed. That is as if fascism was not historically born precisely in Europe.

They act as if Trump’s presidency had not charged his henchmen with the mission of creating an international that would bring together the European fascist formations. As if the current Polish regime, furiously anti-Russian, was not one of the pioneers of institutionalized fascism within the European Union and NATO’s main spearhead against Russia.

They claim Russia’s invisible hand is behind the rise of the fascists. But this explains nothing and serves only as a smokescreen to hide the true roots of the phenomenon, and Meloni proves it. The new leader of Italy’s destiny is a convinced “Atlanticist,” aligned with U.S. imperialism.

The root of fascism

Where, then, does the resurgent fascism in Europe spring from?

The difficulty of the European bourgeoisies in approaching this question, other than through the derivative route of the “external hand,” stems from the fact that it is the very maladies of European (and world) capitalism and the corresponding degradation of its institutions that are at the root of the problem.

The democratic regimes of the capitalist West (parties and institutions) were consolidated on the basis and condition of continuous economic growth that somehow provided some degree of progress for their populations.

At the expense of colonial and imperial exploitation [of oppressed peoples and nations], they created a vast middle class (both petty and middle bourgeoisie), which was content if it could avoid being part of the proletariat and which maintained its social status by politically supporting the dominant classes, as long as they reciprocated by securing privileges for them.

The prolonged stagnation of Western capitalism, which is aging and losing its hegemony, has, however, for decades been sacrificing not only the working masses but a large part of the middle classes. The social gap between “rich” and “poor,” or rather between the haves and the have-nots, is continuously growing, generating an absolute impoverishment of the lower social strata and pushing even the so-called middle classes down the social scale.

Faced with this regression, the middle classes — who were the mainstay of parliamentary regimes, of bipartisanship, of political stability “in the center” — no longer have any reason to bet on such regimes. The parties “of the center” lose support in favor of right-wing extremist proposals, and institutions (from elections to parliaments and “politicians”) are rightly discredited. The “mystery” of the breakdown of the “center” has its origin here and not in the mere demagogy of the “populists.”

The lack of an alternative, with mass influence of an anti-capitalist left, leaves a large part of the working and popular classes vulnerable to the “change” demagogy of the fascist forces, which win votes even on this social terrain.

To this background are now added the disastrous consequences of the policy pursued by European regimes in the face of war.

Europe has given up any semblance of autonomy, whether in the face of the war in Ukraine or the confrontation promoted by the U.S. against China. Unthinking alignment with the U.S. drags European economies into disaster and nullifies any semblance of independence, leading all of Europe and each of its countries to the status of U.S. vassals.

To the effects of the decadence of the economic system itself, barely recovered from the 2008 crisis and the pandemic, are now added, as a consequence of the war, unprecedented sacrifices imposed on people under the pretext of defending already discredited “values” of freedom and democracy — a path that can only accelerate even more the masses’ contempt for the powers that be.

The arguments in defense of national and popular interests are left in the hands of the extreme right and fascists, who thus (even if doing so out of opportunism) assume the role of the only ones who seem to care about the suffering of the populations.

The accusations of “populism” leveled against the fascists — as if trying to win the support of the people were in itself reprehensible — only boosts their popularity, for two reasons. It absolves them as fascists, reducing them to the status of demagogues, and it promotes them as those who dare to make the “popular” promises that the ruling power is unable to make. This is why you hear far-right voters saying: “Let’s at least see what these candidates do.”

The inconceivable statements (in Prague on Sept. 1) of the German “democrat” Foreign Minister, the “Green” Annalena Baerbock — saying, with all effrontery, that Germany will continue to support Ukraine even against the will of German voters (“it doesn’t matter what my German voters think”) — contrasts with the position of the “autocratic” Hungarian Prime Minister Viktor Orbán, who claims to put the interests of the Hungarian population first and therefore refuses to go along with the sanctions against Russia. This is one example, among many, of the service provided by “democrats” to “autocrats” and “populists.”

What we are all witnessing is an updated proof of what history has shown: Imperialism promotes war, and war feeds fascism.

The head of world imperialism today, the U.S., using Britain as its jack, created the conditions that detonated the war in Ukraine by making it inevitable.

The rejection of the compromise contained in the Minsk agreements and later the sabotage, by U.S. and British action, of the peace negotiations between Russians and Ukrainians — in Belarus and then in Turkiye [formerly Turkey] in the first weeks of the war — show beyond doubt who promoted the conflict and who wants to prolong it.

Almost all the powers of continental Europe committed to NATO have chosen to collaborate in the U.S. war enterprise. The price of this capitulation is the drastic downgrading of Europe, namely the EU, as an economic power and translates into an accelerated poverty of the working population.

That this should not have to be the case is proven by the solitary examples of Serbia, Hungary and Turkiye, which, in one way or another, are resisting pressure from Washington or Brussels. Beyond the material reasons that tie Europe to U.S. imperialism, perhaps simple cowardice helps explain the behavior of Europe’s leaders.

The EU, rendered irrelevant, torn apart by huge, barely disguised internal tensions, is on the verge of disintegration.

It is on such fertile ground that the extreme right and fascism rise, in this case with the additional help of a war promoted, financed and armed by regimes which, 24/7, fly the banners of “freedom” and “democracy.”