By Will Hodgkinson
Boston

Sept. 30 — Indigenous leaders of the United American Indians of New England (UAINE), the North American Indian Center of Boston (NAICOB), and supporters occupied the front entrance to the Cathedral of the Holy Cross in Boston to commemorate today’s “National Day for Truth and Reconciliation” in Canada. 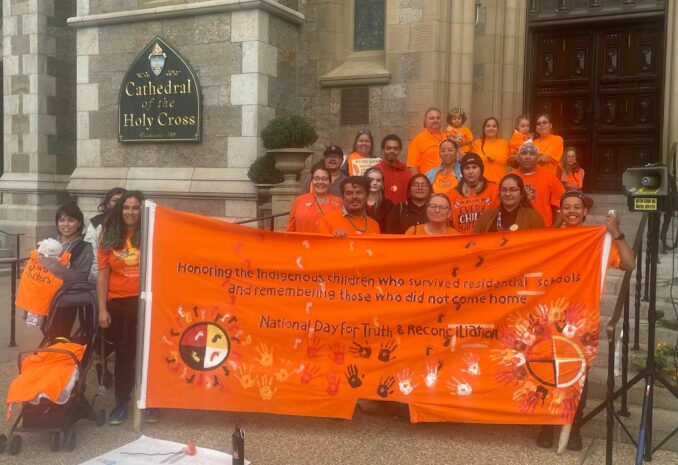 Known throughout the continent as Orange Shirt Day, Sept. 30 honors the thousands of Indigenous children who were kidnapped by government authorities and abused, many murdered, at hundreds of residential and boarding schools in Canada and the U.S. The Catholic Church operated many of the institutions where these atrocities took place.

Orange Shirt Day was created by Phyllis Webstad to connect the stories of other Indigenous children to her experience as a six-year-old, when she had her new and beloved orange shirt taken away on her first day at a residential boarding school, never to be returned. Webstad, born on Dog Creek Reserve, is Northern Secwepemc from the Stswecem’c Xgat’tem First Nation.

Despite Pope Francis’s widely publicized “apology” to Indigenous people this July while in Canada, the Church has refused to hand over even one abusive priest or nun who ran these “schools.” Nor did the Pope rescind the series of papal bulls establishing the “Discovery Doctrine,” which continues to justify the genocide of Indigenous peoples and theft of their lands around the world.

As speakers at this gathering emphasized, the genocidal destruction of Indigenous nations and cultures, committed by the U.S. and Canada, is ongoing. In both settler colonies, racist foster-care systems continue to break up families by keeping thousands of Indigenous children from their relatives.

Jean-Luc Pierite of NAICOB added: “These governments further fail to address access to clean water on tribal lands. Canada and the U.S. continue to boost pipelines and other extractive projects. Meanwhile the crisis of Missing and Murdered Indigenous Women goes underreported and underinvestigated.”

“The government and the church are good at putting up a facade of reconciliation,” said Mahtowin Munro, co-leader of UAINE. “But they can’t hide behind the horror of the residential school system nor the foster care system by burying the truth. We demand our children be brought home.”

UAINE and NAICOB’s press release reports: “On May 11, 2022, U.S. Secretary of the Interior Deb Haaland and Assistant Secretary for Indian Affairs Bryan Newland released Volume 1 of the Federal Indian Boarding School Initiative investigative report. The investigation found that from 1819 to 1969, the federal Indian boarding school system consisted of 408 federal schools across 37 states or then-territories, including 21 schools in Alaska and seven schools in Hawaii.

Other demands highlighted at the Boston action include the protection and expansion of the U.S. Indian Child Welfare Act (ICWA), which gives tribal nations jurisdiction over adoption and custody proceedings for their citizens; the repeal by the Catholic Church of the “Discovery Doctrine,” as well as full restitution of all Indigenous lands and sovereignty.

To remember the victims of the residential schools and to honor the resilience of the children who survived them, Indigenous activists laid orange flowers and children’s toys on the steps of the Cathedral of the Holy Cross, which, like the rest of Boston, is located on the Massachusett Nation’s land.