Reprinted from Resumen LatinoAmericano and the Third World at tinyurl.com/4xb5cxrt

Ambassador Alex Saab, a victim of the U.S. economic war to achieve regime change in Venezuela, has been under arrest for over two years. This article recounts the developments in the diplomat’s court case. Saab is fighting against his illegal detention and extradition before the 8th District Court in Miami. 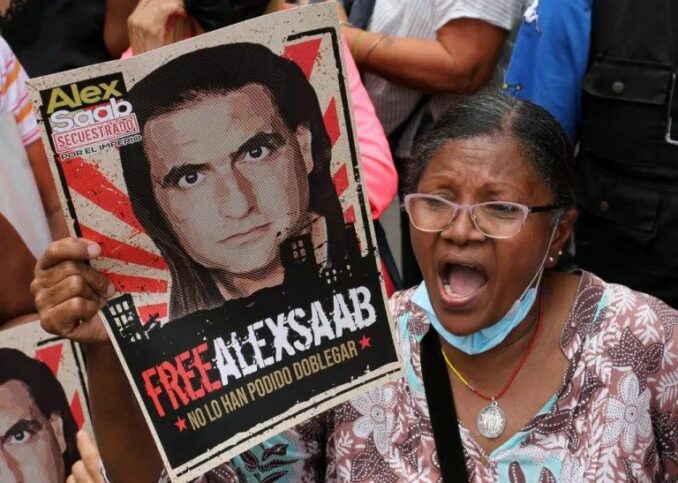 As Venezuela’s special envoy and a deputy ambassador to the African Union, Saab has diplomatic immunity from arrest and detention under the 1961 Vienna Convention on Diplomatic Relations. Although a party to the convention, the U.S. has flouted this principle of international law.

Alex Saab was targeted by the U.S. because of his role in helping circumvent their sanctions imposed on Venezuela. These measures, a form of collective punishment, are intended to make conditions so onerous that the people would renounce their elected government. Such unilateral coercive measures constitute hybrid warfare and are illegal under international law.

Ambassador Saab was on a humanitarian mission from Caracas to Tehran to procure food, fuel and medicine in legal international trade but in contravention of the illegitimate U.S. sanctions. When his plane made a fuel stop in Cabo Verde on June 12, 2020, he was seized and imprisoned at Washington’s behest.

He was tortured and held in solitary confinement until December 2020. Then he was released to strict house arrest but without visits from his wife and children and without necessary medical care.

Although the regional Economic Community of West Africa (ECOWAS) Court of Justice and the United Nations Human Rights Committee ordered his release, Saab was held captive. The $200,000 award in damages by the ECOWAS court was unpaid.

According to distinguished Nigerian human rights lawyer Femi Falana, the arrest and detention of Alex Saab in Cabo Verde is an example of “extraterritorial politically motivated judicial overreach” and a “21st century form of colonialism.”

On Oct. 17, 2021, the opposition party won the national election in Cabo Verde on a platform which included freeing Alex Saab. However, the day before the long arm of Washington “justice” had simply seized the Venezuelan diplomat, dressed him in an orange jumpsuit and deposited him in a U.S. prison.

The original charges against Saab related to money laundering in Venezuela, with Venezuela as the alleged victim. Even if charges related to defrauding the Venezuelan government were justifiable, they should be laid in Venezuela and not in the U.S., which is attempting to starve Venezuela into submission.

Then on Nov. 1, 2021, after what amounted to a judicial kidnapping to the U.S., Washington dropped all money-laundering charges against Saab, leaving the single charge of conspiracy to launder money.

An exhaustive three-year investigation of money-laundering charges by courts in Switzerland, where the activity was allegedly perpetrated, had found no evidence to support the U.S.’s claim.

Conveniently for the prosecution, the remaining charge of “conspiracy” is quite easy to prove, since it only requires proof of an agreement without the objective being realized. Fighting vague conspiracy charges is a nightmare for defense lawyers. The charge is often called “the darling of the prosecutor’s nursery.”

The labyrinth of the U.S. ‘justice’ system

Ambassador Saab is presently detained in a federal facility in Florida. He has been unable to have family visits, because his relatives have no guarantee of safe passage. His prison conditions are difficult; there is insufficient food, and [he is in] a dangerous environment without medical care for his cancer and other ailments.

During his unlawful detention in Cabo Verde, Saab’s counsel challenged the U.S. extradition proceedings with a “motion to vacate,” based on his status as a diplomat.

That motion was first refused in a U.S. “lower” trial court and then appealed “up” to the 11th Circuit Court of Appeals. His appeal challenging the charges based on diplomatic status was then sent right back “down” in June 2022, from the appellate court to the trial court.

In anticipation of his Dec. 12 hearing, Saab filed preliminary motions for disclosure of evidentiary materials with a view to filing a motion to quash the indictment based on his diplomatic status. If diplomatic immunity is recognized, Saab should be released. If not, there will be a trial for conspiracy to launder money in Venezuela.

Exculpatory material could be held by the U.S., which would prove Saab’s status as a diplomat. Under what are known as the Brady rules, the prosecution must provide all evidence available and under its control, which might help in his defense.

Accordingly, Saab requested all information material to his defense held by the U.S. government regarding diplomatic status, including evidence on:

His service as Venezuelan special envoy or other diplomatic roles;

Whether any other country, or international or supranational organization, considered him to be a Venezuelan special envoy or any other diplomatic role;

His role in Venezuela’s state-to-state activities with Iran and the purpose of his travel to or from Iran;

The flight, diversion or detention of the plane on which he was traveling, which landed in Cabo Verde;

Knowledge by U.S. government personnel of his diplomatic status, appointment as a special envoy or activities taken on behalf of Venezuela; [and]

Documents found on his person or plane, following his detention and arrest in Cabo Verde, and any information relating to such documents.

Saab asked the court to order the disclosure of information held by the U.S. Departments of Defense, Justice, State and Treasury; the Office of International Affairs; the National Security Division; the Drug Enforcement Agency; the FBI; the Customs and Border Protection; Homeland Security Investigation; the CIA; and the U.S. Coast Guard.

Saab’s counsel anticipates that all these agencies would have information regarding his diplomatic status. Comprehensive disclosure could lead to recognition of full immunity.

The U.S. government prosecutor made a series of somewhat specious arguments asking the judge to reject the Brady motion, dismissing it as a simple “fishing expedition” with no merit. In short, this was a legal tactic by the government to hide the truth.

The U.S. prosecutor argued that the requests to review documents outside of the prosecution team’s immediate control should be denied, even if they were held by a government agency and even if they supported Saab’s claim of diplomatic status. The prosecutor contended that only material under the prosecutor’s direct control and related to the investigation can be disclosed; other material held by other branches of the government cannot be sought and disclosed under Brady.

This would mean, if the U.S. government has definitive proof of Saab’s status or recognition thereof in agencies outside of the prosecutor’s control, Saab cannot obtain such information under the Brady rule.

Saab’s defense counsel argued that he requires disclosure of information from all branches of the U.S. government. This is because the entire U.S. government is engaged with his extradition and prosecution. The prosecution, for instance, even asked to allow someone from the National Security Division to attend the hearing, although they were not previously part of the prosecution team.

The following describes the prosecution’s arguments followed by those of the defense. This is based on the respective court statements filed by the two sides, particularly on the transcript of the Sept. 13 hearing.

The prosecution argued that the issue of ignoring diplomatic immunity had been settled in Cabo Verde when it granted extradition. The U.S. court should not depart from precedent and second-guess the legitimacy of a foreign country’s decision to extradite an individual. Such an approach would be contrary to the act-of-state doctrine with respect to Cabo Verde.

Saab’s defense counsel countered that no authority requires deference to Cabo Verde’s decision to allow the extradition. Cabo Verde’s law applies in Cabo Verde and not in the U.S.

The prosecution maintained that Saab has never been entitled to immunity under either the Diplomatic Relations Act or the International Organizations Immunities Act, because he had never been identified to the U.S. State Department as a member of any foreign mission in the U.S., including Venezuela’s bilateral mission and delegation to the African Union.

Saab’s defense counsel disputed that; regardless, Saab was traveling from Venezuela to Iran and at no point transited the U.S. He had “transit immunity.”

The prosecution contended that U.S. law (U.S. v. Alvarez-Machain, 1992) allows prosecution even if the accused were wrongly sent to the U.S. Even forcible abduction does not prevent trial in the U.S. for violations of U.S. laws.

Saab’s defense stated that this is a baseless excuse which would allow U.S. agents to kidnap a person in any country, and that person could be tried for crimes under U.S. law.

Central to the U.S. government’s case is the self-serving notion that since Washington does not recognize the Maduro government, no Venezuelan. diplomatic nominate enjoys immunity. In other words, the imperial power arrogates to itself the authority to determine whom other countries may appoint as their diplomatic representatives.

Saab’s defense counsel noted that it is an undisputed fact that Venezuela, the sending state, and Iran, the receiving state, not only recognize each other’s government, they recognize that Saab is a special envoy.

In that context, to accord Saab diplomatic immunity is independent of the U.S.’s position as to which government of Venezuela they recognize. To hold otherwise would completely distort and rob of any meaning both the U.S. obligations and the Vienna Convention and the Diplomatic Relations Act. Failure to do so would be devastating to the diplomatic world and international relations.

Arguments in Saab’s defense were presented to the court on Sept. 13. On Sept. 15, Judge [Robert] Scola ruled partially in favor of Saab, granting him circumscribed access to discovery materials. Disclosure under [the] Brady [rule] would include materials under the control of the prosecution: DEA, FBI and ICE.

The U.S. court’s narrow interpretation of the Brady obligations risks causing a major injustice. If, in its many international relations and contacts, the U.S. has evidence of Saab’s status, the U.S. can hide this, if this evidence is outside the scope of the criminal investigation against him.

This would even be possible if the U.S. had recognized Saab’s status as a diplomat in some special context outside of the investigation of the alleged conspiracy to launder money. This denial of justice could be likened to a form of judicial lynching.

Trial for Dec. 12 and a proposed nonjudicial solution

We believe Mr. Saab must be recognized as a diplomat, and trial should be terminated. There is a nonjudicial means to resolve this. The Biden administration can engage in a prisoner exchange that would unite Mr. Saab and also U.S. citizens imprisoned in Venezuela with their families. Venezuela is willing, and the U.S. should do the same.

John Philpot, an expert in international criminal law, is a defense attorney and a member of the Barreau du Québec and of the Consultative Council Asociación Americana de Juristas. Roger D. Harris is a recovering political scientist. Both authors are active with the FreeAlexSaab campaign and the Task Force on the Americas, a human rights organization.