A New York Times weekly news quiz Sept. 9 asked which of these climate disasters happened this summer: floods in Pakistan; drought in China; heat wave on the U.S. West Coast; wildfires in Europe; or all of the above. To these are added September’s disasters: historic hurricanes in the Caribbean and the southeast U.S. and Typhoon Merbok in Alaska. And the season has just begun.

The destructive remnants of Typhoon Merbok are a recent example of an unexpectedly catastrophic weather phenomenon. 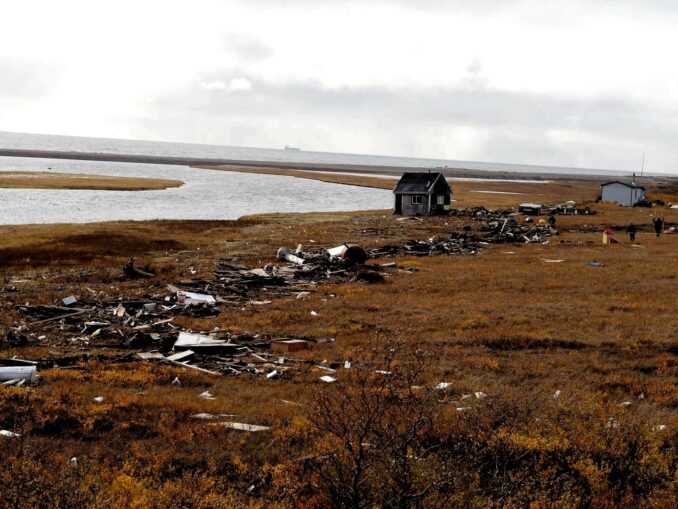 Merbok formed in cold waters off Japan; it regained power and moisture as it moved east across water that “historically would not have supported tropical storm formation,” said Rick Thoman, Alaska climate specialist from the University of Alaska Fairbanks.

From this new origin site, Thoman explained, Typhoon Merbok traveled a shorter distance and remained unusually powerful as it reached Alaska. It brought massive amounts of rain, waves, salt water, sand and high winds, wreaking havoc along a 1,300-mile swath of coast from the Kuskokwim River north to the Bering Strait. (KTOO, Sept. 28)

Alaskan coastal communities are “off the grid,” connected to the rest of Alaska only by boat or plane. A few communities have thousands of residents but most are small, home to a few hundred people at most.

‘The sea is our garden’

Many Alaskans put together their livelihood from a patchwork of seasonal labor, the annual “Permanent Fund” check from state oil revenues, and a very important component of subsistence hunting and fishing.

Subsistence means hunting and harvesting fish, birds, sea mammals, land animals, fur-bearing animals, berries, and materials that are made into everyday functional objects and crafts for sale. These resources provide food as well as cash income. In addition to the serious damage experienced in towns and villages, the typhoon destroyed and damaged many of these subsistence-hunting and fishing camps the Native people rely on.

Families move out on the land when it is time to start harvesting and processing. During this time they live and work in stationary, seasonal camps that families maintain and improve for decades. They are often located near camps of relatives and longtime friends. Family members, scattered all around Alaska the rest of the year, often return seasonally to spend time sharing work and camp life.

Over the decades people add to their camps, building fish weirs and traps, fish wheels, boats, boat rests, processing tables, drying racks, storage caches, smokehouses, cabins and outhouses, so they can live and work efficiently and comfortably for months at a time. People outfit their camps with generators, all-terrain vehicles, motor boats, fuel storage, pumps and other equipment for safety and more productivity. These are longtime family enterprises.

Besides destroying the camps and equipment, the typhoon struck at the end of the harvest season, destroying much that had already been prepared for winter and for selling.

Recovery in Western Alaska will be difficult and expensive, because of the weather and inaccessibility. Snow is already beginning to fall, with ice not far behind. The annual supply barges must make their long anticipated deliveries within a week or two. However, since these orders were placed months ago, the cargoes do not reflect people’s current needs.

The situation is dire. Aiding these communities will not only require temporary shelters, restoring essential infrastructure, food and fuel for the immediate future, but figuring out a long-term strategy to help people regain their livelihood. The people of Western Alaska are resilient and innovative, but most construction supplies and equipment will not come until next year’s barge. Air cargo is enormously expensive.

In addition to all the material damage, subsistence camps are a vital part of the Yup’ik, Inupiaq and other Native Alaskan cultures of the region. They provide multigenerational cultural instruction, where the youngest and the oldest live, talk, learn, laugh and share the stories, the language, and the history and memories of the people. The loss of subsistence camps is a huge threat to human culture. 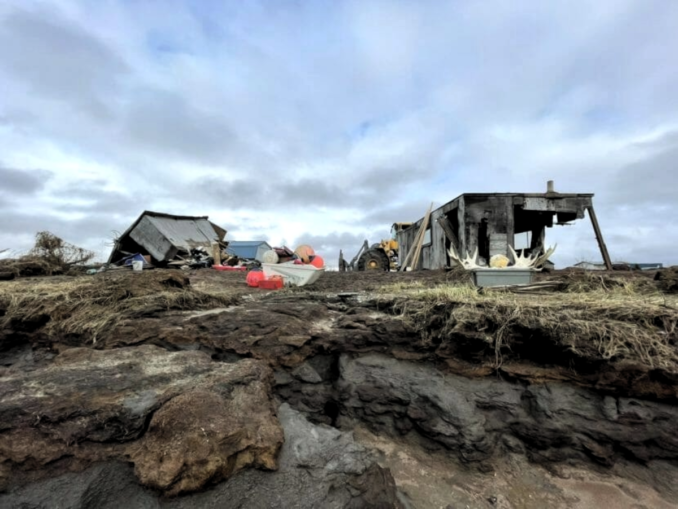 The destruction being experienced on the coast of Alaska gives an insight into the high cost of global warming being paid by millions of people around the world, as they experience the disruption and destruction of their lives and cultures due to unmitigated human-induced climate change.