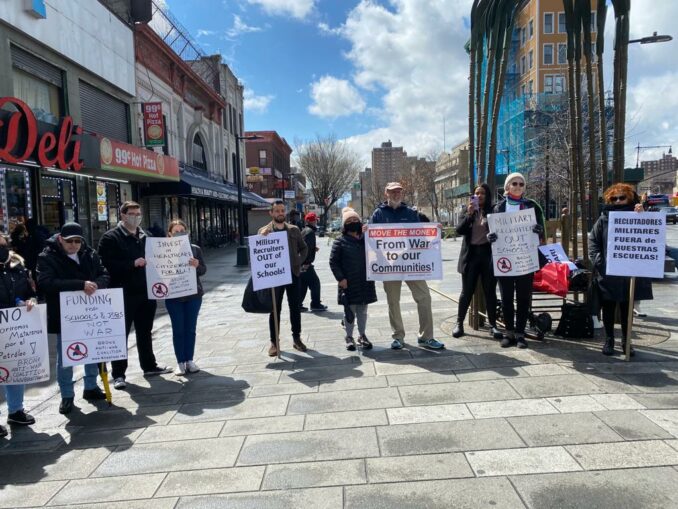 March 26 protest in the Bronx

The following statement was issued by the Bronx Anti-War Coalition, a grassroots, community-based peace group, dedicated to challenging U.S. militarism at home and abroad and fighting for community reinvestment in our borough. Our goal is to end the $800-billion per year military budget used to uphold U.S. imperialist interests all over the world. The coalition is made up of anti-war peace groups and community organizations, veterans, tenant unions, racial and environmental justice activists, workers, abolitionists, and anyone else fighting in our borough for the liberation of all oppressed people worldwide.

The South Bronx, a community composed of 98% Black and Latino families, is one of the most poverty-stricken and oppressed districts in the U.S. More than 40% of South Bronx children live in poverty. Described as a “food desert,” the South Bronx has one of the highest rates of food insecurity in the country. Neighborhoods lacking affordable supermarkets cause people to rely on small bodegas, which typically lack fresh produce or nutritious options. Obesity, diabetes and high blood pressure affect more than one-third of adults.

The South Bronx neighborhood of Mott Haven, located only six miles north of Trump Tower on Manhattan’s Fifth Avenue, is nicknamed “Asthma Alley” because it has some of the worst air pollution levels in the U.S. Mott Haven residents see rates of asthma hospitalizations 21 times higher than other New York City neighborhoods. And for the third year in a row, the Bronx led the state in eviction filings and had the highest unemployment rate in the country in 2020.

With countless U.S. communities suffering from racist neglect, Congress approved another $12 billion in military aid to Ukraine, in addition to the $54 billion in weapons provided so far. The U.S. government is making a conscious decision to deprive majority Black and Brown communities — from the South Bronx to Jackson, Mississippi, to Flint, Michigan — of funding needed to address decades of structural underinvestment and environmental racism.

The police state is domestic imperialism

Only with an anti-imperialist analysis can one begin to understand why the U.S. government has no problem finding funds to fuel their NATO proxy war against Russia in Ukraine, while neglecting the crisis that this overseas, organized violence has exacerbated for Black, Latino, Indigenous and migrant populations within U.S. borders.

U.S. imperialism, rooted in white supremacy, manifests itself both at home and abroad. The violence, racism and oppression that communities of color face in the U.S. are directly linked to U.S. imperialism overseas. Lynchings of Black people by police are a continuation of the violence inflicted by U.S. military occupations on the African continent and on Africans throughout the Global South broadly. The U.S. empire maintains its hegemony and control over colonies through mass violence and terror — so domestic mass shootings reflect overseas imperialism.

Military veterans and retired mercenaries, hired to murder anyone standing in the way of U.S. interests, return home and join their local police department. U.S. militarism and policing are so intertwined that they exchange more than just personnel but also equipment, suppression tactics and white-supremacist ideology.

Empowering the military empowers policing. Every expansion in overseas military capacity has subsequently advanced the sophistication of domestic warfare against African, Latino and Indigenous people.

Every dollar spent on war and militarism is money that could be spent on providing vital social services to the people. The U.S. government has stolen trillions of dollars from health care, public schools, public housing, transportation and infrastructure budgets and sent those resources around the world, to Ukraine and elsewhere, in the form of weapons.

We, the workers, demand −

We, the workers of the South Bronx, demand an end to U.S. military provocations, occupation, war and sanctions against Russia, China, Puerto Rico, Iraq, Syria, Somalia, Palestine, Iran, Cuba, Venezuela, Nicaragua and everywhere! We understand corporations profit from these endless wars at the expense of poor and working-class people, both overseas and domestically.

We, the workers of the South Bronx, demand an end to the billions of dollars devoted to war, death and destruction caused by U.S. militarism and demand that those billions be spent on addressing the dire economic and social need for housing, jobs, schools, infrastructure, clean air and water.

We, the workers of the South Bronx, demand that Mayor Eric Adams and the New York City Council restore the $469 million in cuts to the Department of Education budget and end the privatization of public education via charter schools. At a time when students’ severe learning loss is exacerbated by the pandemic, the City is funding more cops instead of funding more teachers, counselors and social workers for our youth.

We, the workers of the South Bronx, demand that Mayor Adams shut down migrant tent encampments and provide asylum seekers with safe, private and permanent housing. We understand that U.S. imperialism is the root cause of the migration crisis, a direct result of regime-change operations and colonialism.

We, the workers of the South Bronx, demand an end to union busting and defend the right of workers to unionize. By supporting union struggles for Amazon, Starbucks and all workers, we fight against racism, colonialism and imperialism. We understand the imperialist war machine seeks to open up Global South markets in order to shift jobs to areas with cheaper wages. We will continue to struggle for a world free of imperialism — where workers are not compelled to leave their homelands due to violence and superexploitation.

End the wars at home and abroad! No to NATO, war and racism! Money for jobs, schools and housing! Invest in our youth and communities now!

The South Bronx Rally Against U.S. Wars, Militarism and Imperialism will take place Saturday, Oct. 15 at 1:00 p.m. ET in Fordham Plaza. This demonstration is held in coordination with United National Antiwar Coalition (UNAC), which is calling for a week of actions Oct. 15-22 to stop Washington’s military aggression against Russia and China, and to stop the endless wars in Iraq, Syria, Somalia, Palestine and everywhere. Visit bxantiwar.org for more information.