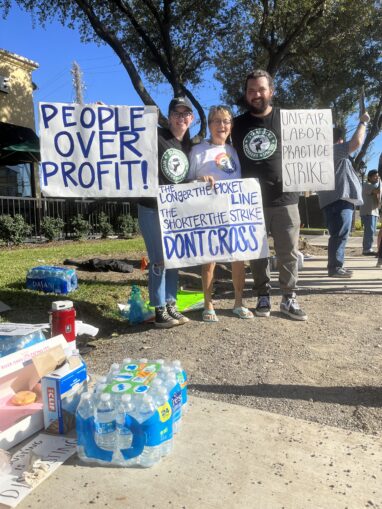 A spirited 12-hour demonstration was held Oct. 1 outside Houston’s first unionized Starbucks store from 6 a.m. until 6 p.m. It was an unfair labor practice strike, in response to the unjust and illegal firing of one of the union organizers.

Josh Deleon had worked at Starbucks for almost nine years; but in retaliation for his union organizing leadership, the bosses fired him days before the election votes were counted. The workers at Starbucks on Shepherd and Harold streets did win the election; and Josh celebrated with them, even though he no longer had a job.

“I’m only one of over a hundred Starbucks workers/organizers who have been fired around the country. I have a case open with the NLRB for the unfair labor practice of firing organizers. Today none of the workers came in, so there’s a couple of managers working the store.”

All day long, cars passing this picket line, located on a very busy street, were honking, waving and putting fists in the air to show their support.