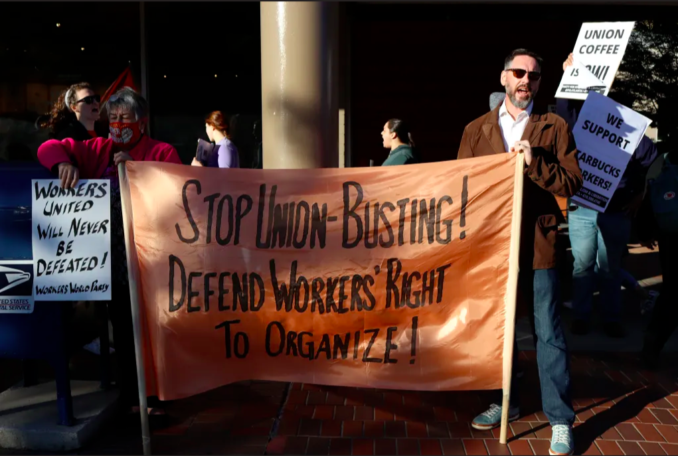 Solidarity with Ansley Mall Starbucks workers — Dianne Mathiowetz holds one side of the banner.

Ansley Mall Starbucks workers chose National Coffee Day, Sept. 29, as the time for their strike. A robust and loud picket line formed in front of the mall location in northeast Atlanta early in the morning. Dozens of supporters came throughout the day from the Atlanta Labor Council, the Painters Union, community organizations, political groups, Amazon workers and others.

Inside, two store managers and a district manager attempted to keep the location open. Despite having to serve only a handful of customers who had crossed the picket line, they had apparently had enough by noon, locked the door and abandoned their strike-breaking duties.

The sign-waving picketers moved to busy Monroe Drive, where there was more traffic and drivers who responded to the “Honk to Support Starbucks Workers” sign. Upon learning that the managers had left, the workers enthusiastically chanted: “Who Shut it Down? We Shut it Down!”

Just a footnote: When the workers came back on Friday morning, the place was a mess — trash, dirty dishes, unstored ingredients! Proving again that workers are the essential force in society.