Big Business would like to believe that the wave of class struggle by U.S. workers is fading — despite being so visible in Amazon Labor Union’s historic victory at the JFK8 warehouse in Staten Island, New York, and in the lightning spread of Starbucks Workers United (SBWU). 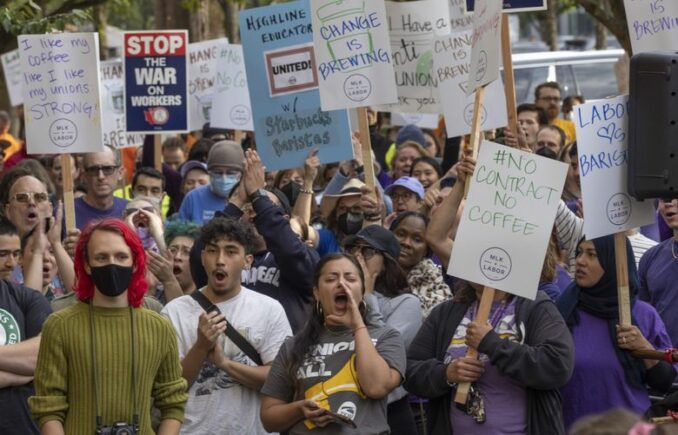 But remember the “Red for Ed” strike wave, begun by the Chicago Teachers Union in 2012, taken up with a vengeance by the West Virginia teachers, then spreading to Oklahoma and to Arizona. That has not ended yet, as the Seattle Education Association strike Sept. 7 shows. (See “Class War in West Virginia: Education Workers Strike, Win,” workers.org/books.)

And what about the longest U.S. strike still underway? The United Mine Workers are stubbornly out on the picket line for 18 months and counting in Brookwood, Alabama. (“Alabama miners defiant,” Workers World, Sept. 15)

U.S. workers have been organizing unions and striking for victory for over 200 years. Not stopping now, especially not Amazon and Starbucks workers!

Voices of 400 workers reverberated off the walls of Starbucks world headquarters in Seattle on Sept. 13: “What do we want? Contract! When do we want it? Now!” Organized by SBWU, the block-long picket line was a push back against Starbucks’ rabid union-busting tactics across the country.

The union action protested Starbucks Investor Day, held inside where CEO Howard Schultz and company were announcing a “Reinvention Plan.” Starbucks soon-to-be CEO Laxman Narasimhan was introduced at the meeting, but Schultz, the infamous outgoing CEO, will remain on the board.

In response to the workers’ tremendous organizing drive, the “reinvention” no doubt includes Starbucks current anti-union tactics, while adding new technology to wring huge profits for investors out of workers’ labor.

The SBWU demonstration in front of the massive Starbucks tower was a show of force to the bosses scheming inside. “If we don’t get it? Shut it down!” the workers chanted. At the rally, fired-up Starbucks worker-organizers from Seattle; Portland and Eugene, Oregon; and Olympia, Washington, gave moving statements about working conditions at Starbucks and their successful organizing drives.

On Sept. 8 a national zoom meeting initiated by Support Amazon Workers Network called for national demonstrations and activities on Sept. 29 (National Coffee Day) and Oct. 1 (International Coffee Day), which will be the six-month anniversary of the Amazon Labor Union victory at JFK8 — the first Amazon facility unionized in the U.S. The actions will show solidarity with union drives by Amazon and Starbucks workers. According to an Aug. 30 Gallup poll, 71% of people in the U.S. back unionization. (news.gallup.com)

The call included worker-leaders and supporters of Starbucks and Amazon workers from across the U.S. For more info, see supportamazonworkers.org.

On Sept. 15, Starbucks management called in the cops to threaten Boston SBWU’s 24/7 encampment. This was the two-month mark of a militant strike against discrimination and union busting by workers at the Boston University neighborhood shop at 874 Commonwealth Ave. 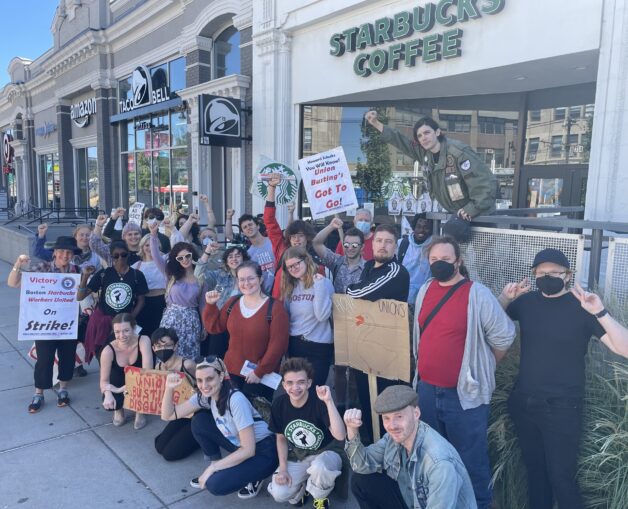 For the first time since the strike began July 18, cops were brought in to threaten arrest — on the pretext of alleged trespassing. A Boston Police Department captain and his Special Operations SWAT squad — sporting bulletproof vests and driving arrest wagons — arrived to enforce Starbucks’ global “union avoidance” and infamous union-busting law firm Littler Mendelson’s menacing of the union.

Strikers and supporters from throughout greater Boston — including a large contingent of the one-month-old Boston University Graduate Students’ Union — massed in defiance on the strike-line to confront the corporate-instigated police attack.

Between songs of resistance and rousing chants led by Workers United strike captain Spencer Costigan, speakers condemned the silence of Democratic politicians about Starbucks’ use of state force and called on Boston Mayor Michelle Wu to order the city’s armed forces withdrawn immediately.

Amazon workers at the TL2 Warehouse in Stone Mountain, Georgia, took the tech giant by surprise Sept. 13, when they walked out over low pay, dangerous working conditions and management intimidation. Workers chanted: “No respect, no work — no cap!” The latter is slang to emphasize: “I’m telling the truth. No exaggeration!” 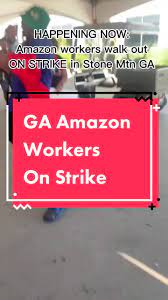 The walkout came a day after a co-worker passed out from heat exhaustion and was taken to the hospital, a crisis videotaped and shared widely on social media.

Inland Empire Amazon Workers Union tweeted Sept. 14: “IE AWU stands in solidarity with the Amazon employees that walked out in protest for better pay and working conditions in Stone Mountain, [Georgia]. We employees deserve the basic life necessities, and we demand them without any retaliation and backlash in return. #AmazonHurts.” Those workers in San Bernardino, California, based in the Inland Empire region, walked out Aug. 15 over similar demands; their facility is one of only three U.S. Amazon air hubs.

Stone Mountain workers received more support Sept. 15: “The Amazon Labor Union stands in solidarity with the @amazon workers at ATL2 in Stone Mountain, Georgia. Workers all around are tired of unfair treatment, and we’re not sitting around waiting for change; we’re demanding it.”

On Twitter, Lynn Schore commented: “#Amazon workers go out on strike in #StoneMountain, Georgia. Perfect place to do it. Stone Mountain is the beating heart of Southern racism and white-supremacist hatred.” (Sept. 14)

She is referring to a giant 90-foot-high memorial to white supremacy and the Confederacy, sandblasted into the mountain rock, featuring enslavers President Jefferson Davis and Generals Robert E. Lee and “Stonewall” Jackson, galloping on horseback. Ku Klux Klan members and admirers organized the stone sculpture, and in 1915 they burned a cross at the mountain’s summit to announce a revived anti-immigrant, anti-Semitic, anti-Black “second Klan” that policed “morals” and became a political force for white supremacy throughout the U.S.

Now workers are uniting across nationality, language, sexual and gender identity, age and ability to forge a unity that defies the forces of patriarchal racism and the assaults of capitalism — including right there at Amazon TL2 at the foot of Stone Mountain.