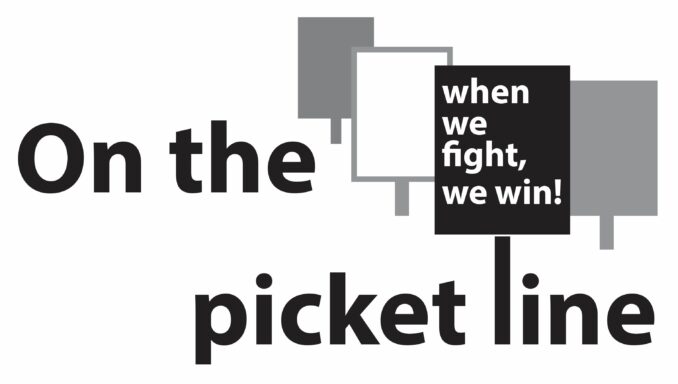 Nurses must sound like a broken record to some, especially the greedy hospital CEOs who continue to equate health care with corporate profits. Instead of “show me the money,” nurses across the U.S. are demanding retention incentives and recruitment strategies, so enough nurses remain working to deliver optimal safe patient care.

This mid-September, some 15,000 Minnesota nurses held a three-day strike at 15 area hospitals over stalled contract negotiations. Minnesota Nurses Association President Mary C. Turner, an RN at North Memorial Hospital, explained why the nurses struck: “When our executives refuse to fully staff our hospitals and continue to push nurses out of the profession, that is a public health crisis.” (tinyurl.com/25vepvxn)

Maine Medical Center nurses voted 3-to-1 to recertify their union and won a contract that begins to address safe staffing and work-life balance. Lastly, the University of Wisconsin Health nurses, represented by Service Employees Union (SEIU) Healthcare Wisconsin, won union recognition despite attempts by UW Health corporate bosses to bust the union’s efforts. After a rally by nurses and a three-day strike planned, the hospital agreed to recognize the union and begin to renegotiate a contract.

According to Cornell University Industrial and Labor Relations (ILR) School’s Labor Tracker, since August 2022 there have been eight teacher strikes at 14 schools, spanning pre-K to university education. Seattle teachers reached a tentative agreement to end their strike begun on Sept. 7. Teachers in Columbus, Ohio, struck for four days last month before approving a contract that guarantees a pay increase and climate-control upgrades to all schools.

Faculty members at Eastern Michigan University, southwest of Detroit, ended their September strike following a tentative agreement with university administration. Contract negotiations centered around salary and prohibitive health insurance increases. This same administration sought a court injunction, claiming the strike was illegal, but it was denied by the judge. The Eastern Michigan University-American Association of Union Professors (EMU-AAUP) represents 500 tenured and tenure-track faculty.

United Auto Workers (UAW) Local 1166 represents workers at the Stellantis NV plant in Kokomo, Indiana. The plant is owned by Stellantis, formerly Fiat Chrysler Automobiles. After a strike in early September, the workers ratified a new contract addressing the deteriorating conditions inside the plant. The contract guarantees the installation of a new HVAC system, repair of broken machinery and overtime protections.

Mississippi poultry plant workers are organizing at the Peco Foods plant in West Point, Mississippi, for recognition with United Food and Commercial Workers (UFCW) Local 1529. Poultry plants in Mississippi have been the target of Immigration and Customs Enforcement (ICE) raids, like the one in 2019 at the Koch Food plant in Morton, Mississippi. It was part of the largest workplace immigration raids in state history. Almost 700 workers were arrested, half of them from Morton, which the community has not recovered from.

Minor league baseball players have won their fight for a union! They will join the Major League Baseball Players Association (MLBPA). Finally, the minor leaguers may win some of the perks that major league players had won from MLB corporations that reap profits from lucrative television contracts. Minor league baseball has a 120-year history of abusing players, offering meager salaries, no job security and other mistreatment. The union drive was organized at the player level, and the MLBPA is ready to work to make the minor league players’ lives easier. Play ball!