Aug. 21 — The most recent conflict among U.S. ruling institutions displays the depth of the crises wracking U.S. imperialism. As U.S. worldwide dominance declines and the government at home fails to stem growing inequality or resolve health and climate disasters, internal conflicts are sharpening. 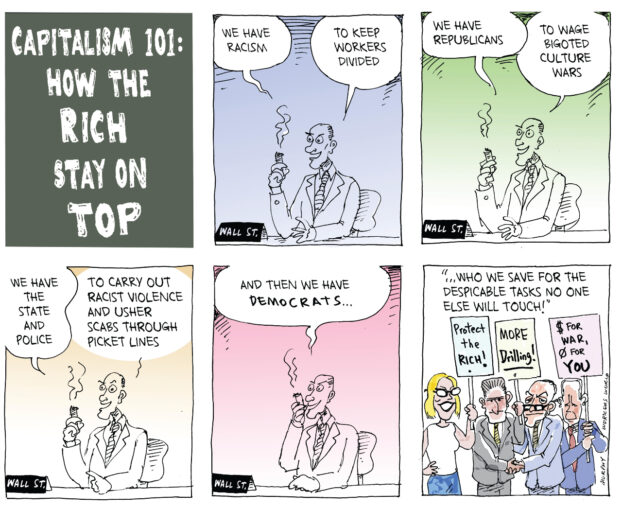 U.S. ruling-class organizations are battling for control of the U.S. capitalist regime —which decides how and for whom $3 trillion is spent each year.

What’s unusual is that politicians and pundits have taken public positions contrasting with their past positions. How the corporate media — centrist or reactionary — discuss this conflict sows confusion. The first step for the working class to intervene is to understand the conflict.

Working-class organizations, those with a Marxist and Leninist view of how the capitalist state and government operate, must make the following point clear: All the parties and institutions involved in this conflict — even though they have real differences with each other — are enemies of the working class and oppressed peoples, worldwide and within the United States.

The conflict erupted with the Aug. 8 FBI search of former President Donald Trump’s Mar-a-Lago residence in Florida to recover top-secret government documents from the time of his administration that he had refused to return to the government archives.

Many in the Republican Party — whose position has been to support every action of the police apparatus —immediately attacked the FBI and the Department of Justice. Some labeled the search a “witch hunt” and called on Congress to “defund the FBI,” which they called the Gestapo — as in Hitler’s “Secret State Police.”

As a result of the unusual right-wing attack on the FBI, one Trump supporter — who the media reported had participated in the Jan. 6, 2021, siege of the Capitol— attempted to gain entry to an FBI office in Cincinnati, Ohio, and died in a shoot-out with police.

While Trump’s handling of secret U.S. documents may still lead to criminal charges — or not — this is not his biggest crime against the working class. Trump agitated throughout his presidency in an openly racist, misogynist and anti-migrant manner and blew wind into the sails of 21st-century fascist organizations, like the Proud Boys and Oath Keepers that carry out physical attacks on oppressed people.

Trump cut taxes for the rich — and cut benefits for the working class. He appointed directors of government agencies — Postmaster General Louis DeJoy is a prime example — who deliberately dismantled the departments they were entrusted with.

Trump appointed federal judges, including to the Supreme Court, who restricted the rights of women and others over their own bodies and their health by banning all or most abortions, besides limiting health care in other situations.

This former TV personality, questionable real-estate investor and racist political demagogue incited fascist elements to assault Congress in order to hang onto his presidential office. This meant overriding the votes of millions of workers — and especially of the large majority of people of color who voted against him.

Role of the FBI

Throughout its history the FBI has been the police agency aimed against all progressive movements in the United States, starting with the Palmer raids that attacked leftists opposed to World War I. After J. Edgar Hoover became its director (1924-1972), it became the center of political persecution, keeping files on labor leaders, leftist organizers, civil rights and peace activists, religious leaders and political leaders of all stripes.

Only a month ago on July 29, using the pretext that the organizations had attended a conference in Russia, the FBI invaded the offices of the Uhuru Movement and the African People’s Socialist Party in St. Petersburg, Florida, and in St. Louis. Unlike the search of Mar-a-Lago, the FBI made no attempt to politely search the premises. They attacked with flash-bang grenades and handcuffed the people found inside.

The raid on the APSP was typical of FBI actions and is a good reason for anyone who defends democratic rights to raise a call to abolish the FBI. This is not the same as a seemingly similar call by pro-Trump Republicans.

What the Republicans really meant was that they want directors of the FBI and the Department of Justice to be pro-Trump and even more reactionary than those already in place — if that’s possible.

Role of the Democratic Party

Currently the Democratic Party is the presidential party, with control of the House of Representatives and a razor-thin majority in the Senate.

President Joe Biden increased the military budget. He promoted NATO war maneuvers at Russia’s borders and invited Ukraine to join the NATO war alliance, thus provoking Russia to react. Both the Democratic Party and the Republicans are warmongering and belligerent in their support for U.S. imperialism.

Washington has been prolonging the proxy war by arming the Ukranian regime. At the same time the U.S., under Biden just as under Trump, is exacerbating hostility with China. Washington risks war on two fronts.

At home, the Democrats have used the openly pro-big-business stance of two Democratic senators to water down all parts of their program that supposedly aids the workers. Meanwhile they throw money at corporations.

The Democrats are attempting to use the unpopular acts of Trump and the Republicans — especially regarding access to abortion procedures — to mobilize their voters during this year’s midterm elections. They use the Mar-a-Lago legal actions against Trump in the hope of eliminating him from the 2024 election.

What the Democrats refuse to do is mobilize mass actions to defend abortion rights, to stifle the racism of the Trumpites or to support the rights of workers to organize. That is up to the only real progressive force in society, the working class and oppressed people.