Background to the demonization

In 2021, Israel falsely and preemptively designated six of the seven targeted organizations as “terrorist groups,” alleging ties to the banned Marxist liberation organization, Popular Front for the Liberation of Palestine (PFLP), in order to justify any raids. The groups facing repression and intimidation include: Al-Haq, Addameer, the Bisan Center for Research and Development, Defense for Children International-Palestine (DCI-P), the Union of Agricultural Work Committees, the Union of Health Workers Committees and the Union of Palestinian Women’s Committees. 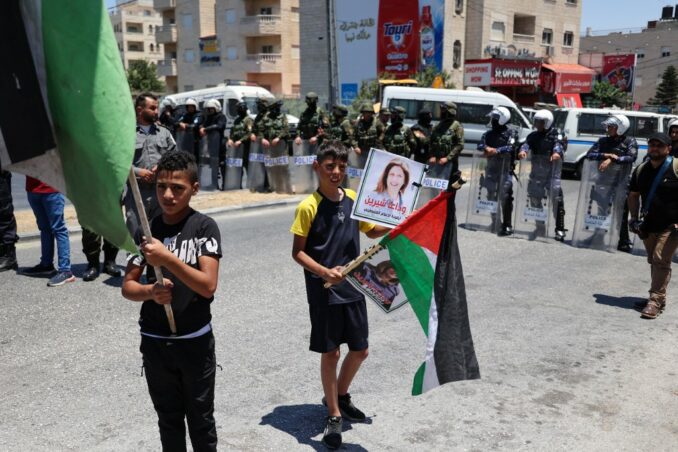 Protesters have hounded U.S. President Joe Biden in Palestine, including July 15 in Bethlehem where boys carried the photograph of Shireen Abu Akleh, the Palestinian-American journalist murdered by Israeli Defense Force troops while on assignment in the Palestinian refugee camp of Jenin. (Photo Credit: Abbas Momani

During his visit to Jerusalem July 13-15, Biden pledged to shield Israel from “all efforts to boycott or delegitimize Israel,” including at the U.N. and the International Criminal Court. The U.S. promises were made in the July 14 “Jerusalem U.S.-Israel Strategic Partnership Joint Declaration,” in which the U.S. pledged to continue to provide “additional missile defense assistance” to Israel. The overall tone and structure of the statement implies a brutal commitment to stamp out Palestinian resistance.

After Biden’s return, 21 members of the U.S. Congress signed a July 18 letter urging the Biden administration to publicly reject the designation of “terrorist” for Palestinian groups and to pressure Israel to rescind any punitive measures.

Because all the U.N., U.S. and EU can offer Palestinians resisting settler colonialism is lip service and performative, toothless statements, Israel was then emboldened to escalate its crackdown on the Palestinian human rights groups.

On Aug. 18, Israeli forces “forcibly blasted through the locked security door of Al-Haq’s offices, bursting the door from its hinges, and raided the premises, setting off alarms,” the rights group stated that day. Israeli Defense Forces broke down the front door of St. Andrew’s Scots Memorial Church, located below Al-Haq’s offices, “leaving long shards of exposed broken glass, sponge-grenades, and several tear-gas canisters, rubber-coated and live bullets around the property.” The Episcopal Diocese of Jerusalem said: “The sound of gunshots, stun grenades and the smashing of doors caused terror among the families living inside the compound.”

The Zionist forces “welded a new reinforced iron door to the outside of Al-Haq’s office,” preventing reentry. Furthermore, Al-Haq’s General Director Shawan Jabarin received a threatening call from the Israeli Security Agency, the Shabak or Shin Bet, demanding Jabarin report to a military base for interrogation. The call threatened him with imprisonment and further measures should Al-Haq continue its work.

The Union of Palestinian Women’s Committees noted that Thursday’s raid was “not the first time that the occupation forces stormed our office.”

The terrorist designation and subsequent raids are part of Israel’s long-running campaign to criminalize, defund and sabotage organizations attempting to document human rights violations against the people of occupied Palestine. Three of the organizations — Addameer, Al-Haq and the Defense for Children International-Palestine — have provided evidence to, and have closely cooperated with, the International Criminal Court’s investigation of war crimes in the West Bank and Gaza.

The escalation in fascist repression stems directly from the EU and U.S. reassurance that they will “combat” efforts to disrupt Israeli impunity at the U.N. and the ICC and will not substantively respond to the Zionist occupier’s false designation of these Palestinian human rights groups as “terrorist.”

Instead, the EU and the U.S. have only rewarded Israeli terror with groveling approval, in effect green-lighting the raids. Israel will continue to get away with blatant violations of international human rights law, as long as the EU and the Biden administration, like their predecessors, continue to defend Israel and unconditionally provide the occupier with military, economic and diplomatic support.

Since the beginning of August, 56 Palestinians — including 20 children — have been murdered by Israeli occupation forces, according to the Office of the U.N. High Commissioner for Human Rights. (ohchr.org/en)

Zionist occupiers have launched aggressive, targeted raids on resistance fighters, with countless civilians being caught in the crosshairs. While much of the media focuses on Israeli atrocities and crimes committed against the Palestinian people, the imperial powers — England, France, the U.S. and other countries — were responsible for creating the state of Israel in 1948. These countries continue to vociferously whitewash Israeli genocide and undermine the Palestinian national liberation struggle.

The struggle to free Palestine is not just against Israel but against world imperialism. As George Habash, late founder of the PFLP, proclaimed long ago: “Our real enemy is not Israel and Zionism only; it is American imperialism, which is backing Israel because Israel is a bodyguard for American imperialist interests.” (Twitter video of Habash speaking @SpiritofLenin, Aug. 2)

Global calls for the U.S., EU and U.N. to hold Israel accountable for its war crimes have gone largely unanswered. Grassroots efforts to impose boycotts, divestments, and sanctions on Israel consistently hit roadblocks, including being outlawed by imperialist governments.

This imperialist support for the Zionist occupation has created an environment in which belief in the armed struggle as the principal method of liberation is now prominent on the West Bank. Any entity standing in the way of that is viewed as the enemy and a collaborator. Because Israel and its allies work overtime to demonize the Palestinian struggle and falsely label any armed resistance against Israeli state violence as terrorism, the Palestinian resistance movements require an alliance of forces of world revolution to achieve victory.

In 1967, Fidel Castro proclaimed: “Revolutionaries didn’t choose armed struggle as the best path. It’s the path the oppressors imposed on the people. And so the people only have two choices: to suffer or to fight.” (Twitter video of Castro speaking @JoseMarti, May 18, 2020)

The Palestinian struggle will overcome Zionist forces and will ultimately clear the road to a substantive liberation that secures Palestinian sovereign power over their lands, from the river to the sea.

All power to the militant Palestinians uniting in mass rebellion to withstand and resist Zionist aggression today. The liberation of Palestine and its most oppressed and colonized subjects is inevitable. The U.S.-backed Zionist occupation, its genocidal invaders and the Israeli settler colony will be defeated.

Sovereignty and political power will be restored to the Indigenous people of the Palestinian lands.