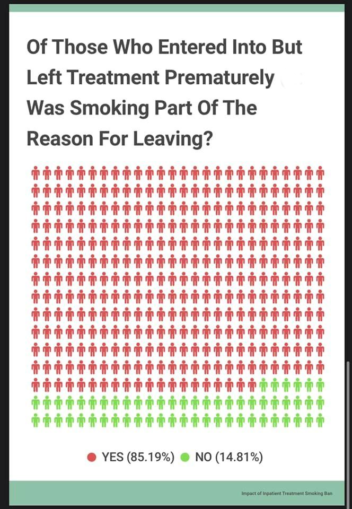 According to a research report written about in Forbes, Sept. 15, 2015, more than half of all substance abusers also consume nicotine products. Trying to quit nicotine is difficult for anyone, even with aids like nicotine patches, gum or medications. It becomes even harder for people who are addicted to quit because of their addictive personalities.

So when a rule from the city of Philadelphia’s Department of Behavioral Health and Intellectual disAbility Service (DBHIdS) and the county’s Medicaid Community Behavioral Health (CBH), a managed-care organization, imposes a rule stating that smoking outside is no longer permitted at the facilities they pay for, people listen.

People will listen, and they will react poorly. On Jan. 1, 2019, the smoking ban was enacted in all facilities that Medicaid pays for in Philadelphia County. Before this ban, many facilities permitted smoking and vaping at designated times and in designated areas. This policy was ended.

Within a week of the implementation of the ban, experts in recovery and social work spoke out against the ban, saying that access to nicotine products can be deal breakers for people seeking recovery. Noted community activist and organizer Brooke Feldman said in a story for WHYY that the only thing that stood between addicts and treatment centers was a packet of cigarettes. (whyy.org, Jan. 4, 2019)

Research regarding smoking bans, even those with planning for a transition rather than stopping cold, have shown that bans have lowered retention rates in addiction-rehabilitation programs. Many more patients left treatment facilities against medical advice than did before these bans were instituted.

At a meeting discussing the ban’s harms, Dr. Chris Tjoa said the number of people leaving against medical advice increased after the ban was enacted. He blamed this on insurance issues, rather than tobacco/nicotine policy.

Another factor that must be considered is that after patients are clean from drugs, particularly opioids, overdose risk spikes, because as the amount of drugs in their system decreases, their tolerance does too. People have died when this happens.

Addicts report seeking recovery and then being pushed away or forced out of treatment. In one case a woman was ejected from treatment at the Behavioral Wellness Center at Girard (formerly North Philadelphia Health Systems/Girard Medical Center) because she got caught smoking. She reported this to her probation officer and was then sent back to jail for nine months.

Another incident, reported by Feldman, involved a patient at CleanSlate, who was able to get into the inpatient rehabilitation facility Keystone Center. He had to leave the facility, because after getting an upsetting phone call, he needed to smoke. He died on Roosevelt Boulevard a few days after leaving the rehabilitation facility against medical advice.

On June 25, 2019, community organizations, including Angels in Motion, Operation in My Back Yard, Sol Collective and ACT UP Philadelphia, united for a protest demanding the smoking ban end. They didn’t know yet that the ban was the result of a cruelly designed research study produced by the University of Pennsylvania and CBH.

These organizations couldn’t have ended the study, because if they did, the city would have had to return the money. The results of the smoking ban study can be found in the research paper: “Changes in voluntary admission and restraint use after a comprehensive tobacco-free policy in inpatient psychiatric health facilities.” They did not note that there were potential patients who were leaving treatment against medical advice, being forced out of it or not entering it at all.

There was a study, “Impact of Inpatient Smoking Ban,” which was done with all participants giving informed consent. This study looked at whether or not being forced to stop smoking cigarettes or vapes played a role in a person’s desire to enter treatment or a person’s departure against medical advice due to the smoking ban.

The study found that 85% of people who left against medical advice did so because they were denied the right to smoke. It found that smoking impacted a little under half of all people’s decisions to go into rehabilitation. This study’s participants were majority unhoused and came from the Kensington section of Philadelphia, the heartland of the addiction epidemic.

Why did the city of Philadelphia, CBH and other entities in the city participate in this charade? They did it for money, which they needed for other city expenses. They certainly weren’t putting it to good use to help people who were addicted or abusing substances.

Progressives should hold the authorities’ feet to the fire and demand reparations for the people of Kensington, especially to those most impacted by this inhumane study, those with low incomes, people who are addicted and their loved ones.