If you are looking for a fun read based on real-life events and filled with historical lessons in union organizing, “Fighting Times: Organizing on the Front Lines of the Class War,” published by PM Press, is worth checking out. The author, Jon Melrod, takes the reader on a journey back in time. 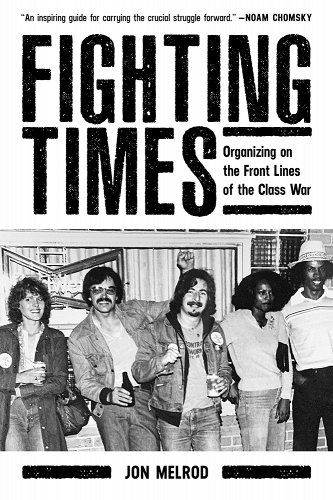 Melrod starts with his childhood in Washington, D.C., where he learned about the harsh reality of racism and national oppression when he saw shackled Black prisoners working on a country road in rural Virginia. He joined the Student Nonviolent Coordinating Committee (SNCC) as an ally in 1965 and participated in actions against former apartheid South Africa around the same time.

Curious about socialism in China after reading Edgar Snow’s classic “Red Star Over China” in high school, Melrod wrote a personal letter to Mao Zedong. In return, he received a four-volume set of “Selected Works of Mao” in a package postmarked from Beijing.

In 1968, Melrod joined Students for a Democratic Society at the University of Wisconsin in Madison and was involved in opposing the U.S. invasion of Vietnam, fighting for independence and a socialist future. A few years later he moved to Oakland, California, and became involved with a group of radical activists who, moved by People’s China, formed the Bay Area Revolutionary Union, which became a national organization, the Revolutionary Union.

As an organizer with RU, Melrod ended up in Milwaukee and later Kenosha, Wisconsin, where he worked for American Motors (AMC, bought by Chrysler in 1986) and was a member of the United Auto Workers. During his tenure in Milwaukee, he worked alongside members of the Black Panther Party for Self-Defense.

As many young people are currently working hard to unionize places like Amazon, Starbucks and Apple, there are several lessons that can be learned from reading “Fighting Times.” Melrod was able to bring workers together under unique and challenging circumstances.

While at the AMC plant in Milwaukee, he helped organize the militant, class-struggle Fight Back Caucus of UAW Local 75. With limited resources, Melrod, along with his closest associates and comrades, became creative. In addition to producing agitational flyers, Fight Back Caucus members silk-screened T-shirts that read “Fight Speed Up” in defiance of retaliatory threats from management.

In one chapter, Melrod talks about his time organizing a multinational contingent of people to defend the Menominee Nation on their land in rural Gresham, Wisconsin, against racist violence. The Menominee seized an abandoned Catholic abbey on the reservation, in an attempt to transform it into a much-needed health clinic. This brave act was attacked by armed, racist vigilantes, who were given a green light by the state to harass and intimidate the Menominee people on their own land.

Melrod transferred to another AMC plant in Kenosha, Wisconsin, a town infamously known to WW readers as the location where cops paralyzed Jacob Blake and where a right-wing extremist murdered two anti-racist protesters in 2020. At the Kenosha plant, Melrod belonged to UAW Local 72 and was involved in the United Workers Organization, which printed and distributed a newspaper with the same title as the book, “Fighting Times.” UWO became the United Workers Caucus of Local 72.

While in Local 72, Melrod helped his co-workers stand up to a violently sexist supervisor, assisted in a campaign against a racist chief steward and even dodged a potentially deadly confrontation with an armed Nazi at a bar. The book ends in the early 1980s, when Melrod and his cohorts used their newspaper to challenge both AMC management and the conservative, business-union leadership of the UAW.

Throughout the 1970s, there were many idealistic revolutionaries like Melrod who were fascinated with the tremendous gains of socialist China and tried to organize in heavy industry. Few, however, have been able to put their experiences into writing the way Melrod has. The stories of shop-floor battles and multinational solidarity are reminiscent of “Blast Furnace Brothers,” written by Workers World Party co-founder Vince Copeland and published in 1973.

Workers World spoke with Melrod about why he decided to write a book about events that took place five and six decades ago. He said: “Today, hundreds of young organizers are once again taking up the class struggle against the owning class in the fight for decent treatment. Many of the essential organizing lessons that will help empower these young militants have been learned by prior generations. What I wrote talks about those lessons and creates a blueprint for building a class-conscious movement against racism and sexism and for dignity on the job.”

“Fighting Times” can be a guide for those seeking creative ways to organize today.