Sandwich makers in Seattle are following the path of Starbucks workers. Workers at Homegrown toil at a large enterprise, making and distributing sandwiches throughout the Seattle metro. Homegrown owns 10 cafes. 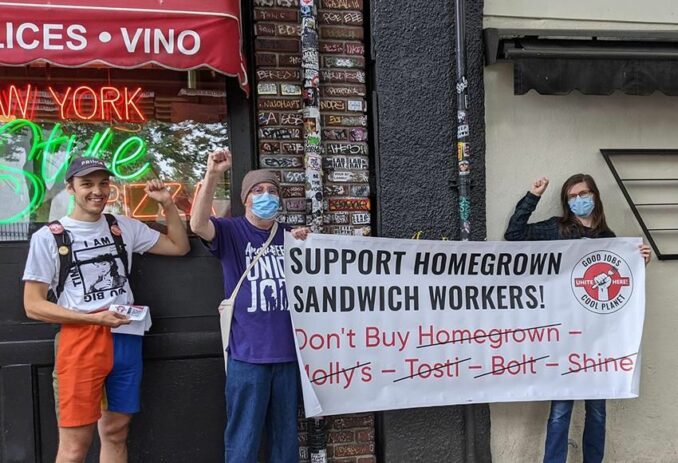 Since June, a majority of the workers have insisted on union recognition through the card check recognition process to be represented by UNITE-HERE Local 8. They are demanding safety, respect and jobs at a sustainable wage when rents are through the roof. Homegrown workers have received increasing labor and community solidarity, including from six members of the Seattle City Council.

After organizing, leafleting and picketing stores through the “Hot Union Summer,” the workers are upping the struggle. Delivery drivers, especially angry since the company installed truck cameras to spy on them while they work, struck Aug. 17.

Now workers in at least four Homegrown cafes have voted to join the strike to press their just demands. (@OurUnionIsHG)

Workers at the MightyKidz child care center in Seattle formed the Magnolia Childcare Union in early August. They put forth demands for wages of $22-$25 an hour for teaching children in the upper-class neighborhood. They demanded at least the minimum child-to-teacher staffing ratios, a clear training plan for new teachers and that they be given legally mandated break time.

But when the teachers struck for their demands, 10 of them were illegally fired. The bosses of MightyKidz accused the workers of “commercial extortion.”

On Aug. 10, a Magnolia neighborhood rally was called, with the help of City Councilperson Kshama Sawant, to rally support and respect for the striking workers.