Proto-fascist Gov. Greg Abbott of Texas is getting a lot of publicity these days for busing asylum-seeking migrants, who have entered the U.S. from the Mexican border, up north to Washington, D.C., and to New York City. He’s now been joined in this political stunt by Arizona Gov. Doug Ducey.

Since mid-April, Abbott has sent 5,100 migrants to D.C. from Texas, on more than 135 buses, as part of “Operation Lone Star.” In New York City, Department of Social Services Commissioner Gary Jenkins said he estimates more than 3,000 migrants have arrived there since May, including a significant number of families with children.

The reason given by these white-supremacist governors? According to Abbott on Aug. 5, “the chaos created by Biden’s open border policies.” (gov.texas.gov)

In fact, many of Trump’s racist border policies have remained in place during Biden’s presidency, due to the multiple anti-immigrant lawsuits spearheaded by Republican state officials and endorsed by SCOTUS and the lower courts.

What we are seeing in real time is the ugly spectacle of two capitalist-controlled political parties jockeying over which can squeeze the most political profit out of the desperate plight of migrants fleeing their countries devastated by U.S. military and economic imperialism.

And this jockeying is not simply with words. Oh no! Actual people are being shunted this way and that, across thousands and thousands of miles, with despair, homelessness, starvation, sickness and often death the result. 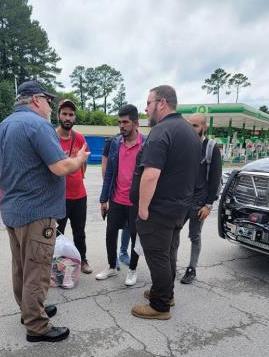 A translator speaks with migrants being bussed by Texas’ Operation Lone Star to Washington, D.C.; they were threatened with being dumped in Rising Fawn, Georgia.

The current struggle between “federal power” and “states’ rights” is a replay in the struggle about which current within capitalism can claim power and control over the fates of workers and oppressed people.

And white supremacy is a deadly premise on which that power is based. Either capitalist current is ready to use any technique available to win — legal suppression including incarceration and forced labor, “dog whistle” racist language and publicity stunts like the busing. These practices are handed down generation to generation from one ruling-class politician to another.

Because Abbott’s busing ploy is not new. It’s a page right out of the loathsome playbook of the White Citizens’ Council that fought desegregation in the South during the 1950s and ’60s, under the banner of “states’ rights.”

Founded in 1954 in Mississippi, as part of the segregationist backlash to the Brown v. Board of Education desegregation ruling by the U.S. Supreme Court, the WCC was “the businessman’s Klan.” Mayors, newspaper editors, business owners and Boy Scouts leaders met openly in this network of white-supremacist organizations throughout the U.S.

In 1985 the Missouri-based Council of Conservative Citizens continued the bigoted work, using the WCC mailing lists and some of its board members. The CCC has close ties with the Republican Party in the South, with prominent politicians like Senate Majority Leader Trent Lott being open members while in office.

One of Workers World’s managing editors, who grew up in Alabama under segregation, witnessed a WCC campaign in her small town to “send Black people up North” to expose “hypocrisy” about fighting racism. A front-page photo story in the local newspaper showed local white Democratic Party business leaders “escorting” a group of Black people onto a Greyhound bus, bound ultimately for Detroit.

The white supremacists organizing these political stunts then, like Abbott and Ducey now, cared not a whit for the fate of those being displaced and moved around, treating people like pieces in a game of political chess. In fact, on Aug. 11 in northern Georgia, authorities got a call that migrants being shipped out of Texas on an Operation Lone Star bus were about to be dumped near rural Rising Fawn, Georgia — where there was only one gas station and farmland. The migrants were being told it was only a “short walk” to Chattanooga, Tennessee — 25 miles away on mountainous local roads.

Workers World is committed to the struggle to fight and end white supremacy! We are sick and tired of the hypocritical charade of so-called “democratic” government under capitalism. We demand and will win safe refuge, shelter, health care, jobs, education, freedom from incarceration and the chance for both “bread and roses” for all under socialism. No borders in the workers’ struggle!