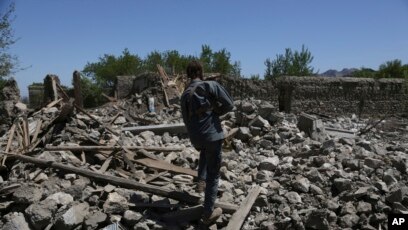 U.S. military left Afghanistan in ruins. Above, the results of a 2017 bombing raid that killed 90.

Raposo is editor of the Portuguese web magazine, jornalmudardevida.net, where this article was published Aug. 10. Translation: John Catalinotto.

While declaring itself ready to prolong the war in Ukraine, “for as long as necessary,” U.S. imperialism is dedicating itself to creating new hotbeds of tension in various parts of the world, in a bid to threaten and show strength.

Three events reveal this: the visit to Taiwan of House Speaker Nancy Pelosi, second in succession to the president behind the vice president, defying China; the Kosovo authorities’ provocations against the ethnic Serbian population, provoking the Serbian Republic and Russia; and the assassination of an Al-Qaeda leader in Afghanistan, with the aim of keeping the Taliban government under fire.

With this, the U.S. gives a practical demonstration of what the new NATO strategy, defined in Madrid at the end of June, means. Leaders expressed their intention to extend the Alliance’s radius of action all over the world, namely to the Pacific. Supported by the complicity of Western allies, the United States is venturing into what it knows best: military threats.

Pelosi’s visit is an obvious provocation to China and a denial of international treaties that recognize one China, of which Taiwan is an integral part. In concert with Biden’s presidency (this is the only way to understand the tour), Pelosi has acted as the spearhead of U.S. imperialism in its confrontation with China. It is clear that she intends to reverse the political course set 50 years ago between [former President Richard] Nixon and [the late Chairman] Mao [Zedong] and, in this way, add a military dimension to the economic war started by the U.S. against China.

The agreement made in 1972 — which seven years later provided the basis for the establishment of diplomatic relations between the U.S. and the People’s Republic of China — is clear: There is only one China, the People’s Republic, the only one represented in the United Nations; Taiwan is an island province which is part of China; U.S. policy towards China respects these principles and cannot interfere in Chinese internal affairs; and differences between Taiwan and the Chinese government will be resolved without outside interference.

The duplicity of the U.S. leads it to swear allegiance to these precepts — as did Secretary of State Antony Blinken and Pelosi herself at the height of the present crisis — while at the same time encouraging independence ambitions in Taiwan and selling arms to the current Taipei government, under the guise of responding to Beijing’s “threats.” It was this second side of U.S. policy that Pelosi took it upon herself to defend to the current Taipei government.

The White House’s game-playing, to make it look like it had nothing to do with the congresswoman’s decision, is a demonstration of political cynicism that convinces no one. Above all, it did not convince China, which deployed considerable military assets in the waters around Taiwan in response to both the political provocation itself and the U.S. deployment of naval military forces to accompany Pelosi’s move.

The message left by Pelosi is clear about U.S. purposes: to strengthen ties with Taiwanese independence seekers “now and for decades to come,” as she put it. The point is that time is running in Beijing’s favor, both because of China’s growing economic and political power in the region and the world and because of the decline and increasing isolation of the U.S. A peaceful course of events will lead to Taiwan’s integration into China and its more immediate sphere of influence. It is this course that the U.S. wants to stop by introducing conflict factors into the region.

The Kosovo government, entirely subordinated to Washington’s orders, has set in motion a campaign of harassment of the Kosovar Serb population, repeating the process applied in Ukraine by Zelensky against the Russian-speaking population. The target is to stir up the Serbian authorities in Belgrade and, through them, Russia.

One of the largest U.S. military bases in Europe is in Kosovo [Camp Bondsteel]. Set up in 1999 following the bombing of Yugoslavia by NATO forces, its function is to serve U.S. strategic interests in the Balkans and the Middle East. A Council of Europe Human Rights envoy who visited the base in 2005 called it “a reduced version of Guantánamo,” and it was known that the CIA secretly used it as a detention and torture camp for individuals labeled “terrorists.”

With the outbreak of war in Ukraine in February, Kosovo was ready to go along with sanctions against Russia. At the end of July, while increasing discriminatory pressures on the Serbian population, the Kosovo government called, through the voice of its defense minister, for accelerated integration into NATO.

The Republic of Serbia, it should be recalled, did not cooperate in the sanctions against Russia. Furthermore, it does not recognize the independence of Kosovo, self-declared in 2008 and forged under the military action of the USA and NATO. In keeping with Serbia’s reasons, Russia and China, along with five other European countries, do not recognize the independence of Kosovo, which, therefore, has no representation at the U.N.

The assassination of Ayman al-Zawahiri, in Kabul, followed the script that Barack Obama had applied to eliminate Bin Laden: state terrorism masquerading as a righteous action. With the right to a presidential speech, the feat is intended to show the world the muscle that the U.S. state still has in “special operations” (i.e. extrajudicial targeted assassinations), but which the U.S. infrastructure lacks on the economic and political fronts.

It seems clear, after U.S. forces left Afghanistan with their tails between their legs, that U.S. imperialism intends to intimidate and destabilize Taliban power. As if the 20 years of destruction caused by the military occupation were not enough, when the U.S. withdrew, it exhausted the country’s finances by stealing $7 billion from the Afghan treasury, thus contributing to the dramatic misery in which the population (almost 40 million) finds itself. Now Washington completes the gigantic theft with the warning that any member of the Taliban regime can be put under the Pentagon’s drone guns.

Again, the Kabul assassination has an indirect target: the more shaken Afghanistan remains, the more difficult the efforts by China, Russia and Iran to help the country recover will become.

Here is a further demonstration of what characterizes the policy of the imperialist powers today: Where they cannot dominate, they must create chaos.

The disasters of imperialism

The destructive power of imperialism is the source of countless and well-known human misfortunes: direct and indirect deaths by the thousands; devastating famines; displacement and migration of millions of people; economic collapse of entire countries . . .

But, from another angle, this policy of deliberate chaos shows how the world is slipping through the fingers of the powers that have dominated it for the last seven or eight decades. In the midst of this apparent disorder, strong winds of change are blowing.