A “Philly Stands with Palestine” march blocked rush hour traffic around Philadelphia’s City Hall for an hour Aug. 10 to protest the most recent Israeli criminal bombing of the people of Gaza, which murdered at least 16 children. 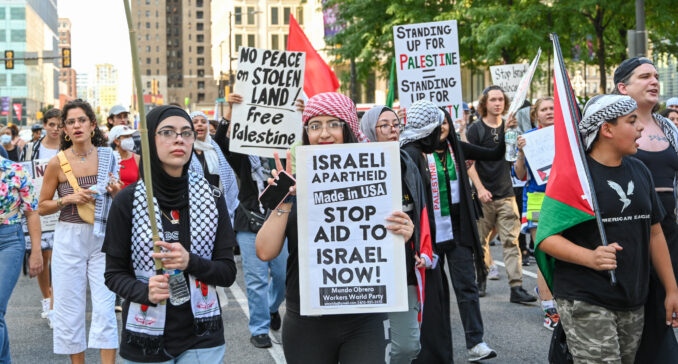 After an initial rally on the east side of City Hall, over 150 activists marched in support of the Philadelphia Coalition for Palestine’s demands: “Honor the 45 Palestinian martyrs; End the blockade on Gaza; Defend Palestinian resistance!” A final rally took place in the street on the west side of City Hall, punctuated at the end by the burning of an Israeli flag.

The PCP is a network of Philadelphia-area Palestinian and Palestine solidarity organizations, including Students for Justice in Palestine at Temple and Drexel Universities; Council on American-Islamic Relations (CAIR-Philadelphia); Anakbayan Philly; Black Alliance for Peace; Workers World Party; Philadelphia Coalition for Boycott, Divestment, and Sanctions against Israel (Philly BDS); Jewish Voice for Peace Philadelphia; and IfNotNow Philly.