Disgusted by the National Labor Relations Board and its entire federal enforcement apparatus seeming to stand by, while billionaire Howard Schultz publicly and flagrantly wages illegal attacks against them, at 8:00 a.m. Aug. 1, Boston Starbucks Workers United (SBWU) took its strike line to the regional NLRB’s front door. At the Tip O’Neill Federal Building, strikers and their supporters alternated chants of: “Marty Walsh, we say no! Union busting’s got to go!” with “Howard Schultz, you can’t hide. We can see your greedy side!” 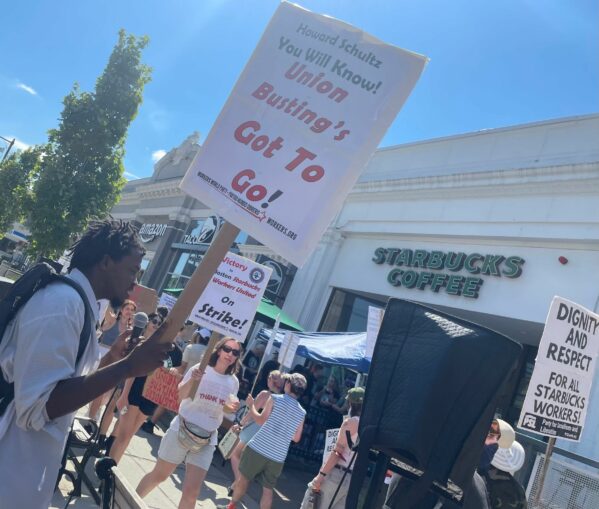 In addition to waging an escalating war of firings of over 100 union leaders nationwide and a slash-and-burn scheduling campaign leaving thousands of baristas without food, rent money and health insurance, on Aug. 1 Starbucks announced to the world’s media that it was raising wages, installing tip apps on registers, enhancing gender-affirming health insurance and other benefits — FOR NONUNION SHOPS ONLY!

Boston SBWU responded to this illegal provocation by initiating five-day strikes at four high-volume stores in greater Boston and Worcester. All of them rallied in solidarity with the workers at 874 Commonwealth Ave., who are on an unprecedented Unfair Labor Practice-strike for three weeks as of this report. (workers.org/2022/07/65640/#) 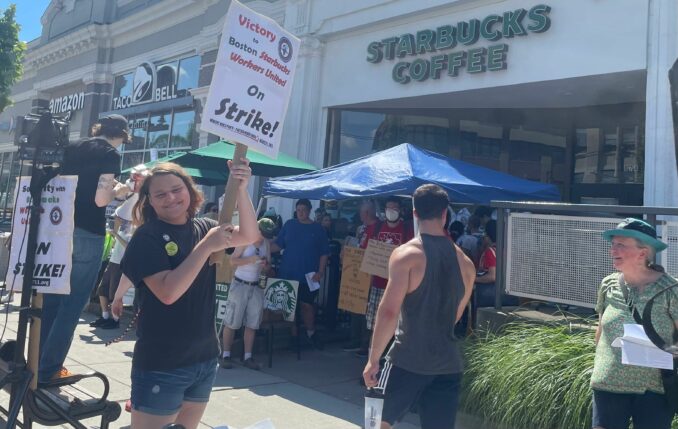 Boston’s multifront strikes and flying squadrons coincided with a wave of dozens of strikes and job actions coast-to-coast Aug. 1. The rank and file-led SBWU burst onto the U.S. labor scene only eight months ago, with its first union vote in Buffalo, New York. The prairie fire of nearly 300+ unionized Starbucks shops has swept through Schultz’s empire of over 9,000 U.S. stores (34,000+ stores worldwide), posing a “Which Side Are You On?” crisis for leaders of the Democratic Party, like Labor Secretary Marty Walsh, once Boston’s “labor” mayor, and Schultz himself, who ran for President in 2020.

Indeed, the week’s Boston strike lines saw a parade of local Democratic Party politicians — mayors, state representatives, attorney generals, city councilors and district attorneys — show up and post great pictures. All of them have the governmental authority and power to legally shut down Starbucks’ Pinkerton-style union-smashing. They could rule all fired workers eligible for unemployment benefits, based on the blatantly retaliatory mass terminations, including the Memphis 7.

In response to Starbucks’ threatening to run shops with scabs — like at the struck and closed-tight 874 Commonwealth Avenue, where a 24/7 encampment has stopped all Teamster driver deliveries — any one of these politicians could declare Starbucks’ violent plan a public safety threat and officially prohibit it.

Speaking at the NLRB’s front door, Tyler Daguerre, a barista at the struck Coolidge Corner store and a Boston SBWU leader, declared: “This is our power right here on the strike line! We can’t rely on government agencies like the NLRB and politicians like Marty Walsh, the Secretary of Labor, in his own city to come down here and show us some support, while we’re fighting for our lives out here with this union busting, here and around the country. They’ve been dead silent. No more performative White House ops. No more sweet tweets. We need substantive action to enforce workers’ rights law, now!”

On Aug. 7, the union massed its forces and supporters at a “Mega-picket,” at the strike line entering its fourth week. Strikers blasted worker-power songs at the thousands of supporters passing by in the Boston University neighborhood and played water balloon games in the 100 F heat under the awning of the shop’s locked doors — decorated with “Howard Schultz WANTED” signs and a giant rainbow flag.

The moving picket alternated with rounds of militant karaoke, with young workers representing a rainbow of nationalities and genders, jumping on benches and taking turns belting out their favorite songs of celebration and defiance with the crowd dancing and chanting in response. Despite weeks of picket duty in intense heat and extreme sacrifice, most of the performers reveled in a message of making history by taking action.

Anthony McWhorter of the Young Black Panther Party joined with barista chant leaders demanding “Contract Now!” and “Union Busting is Disgusting!” through United Steelworkers Local 8751’s powerful sound system, reaching the block of Target, Amazon, Chipotle, Taco Bell and UPS storefronts. Workers from these stores have been providing material assistance to the strike encampment since day one. Jamie Wallace, President of Boston’s Coalition of Black Trade Unionists, Ed Childs of UNITE HERE Local 26 and many young and talented worker-fighters fired up the crowd with words and songs of union power.

Spencer Costigan, a shift manager at the three-week-struck store, told the cheering crowd at today’s rally: “We are here to put Howard Schultz on notice that our strike will continue until the union’s demands are met. We deserve to come back to work free from an environment of racism, transphobia and constant retaliation and harassment that threatens our health and livelihoods just for democratically voting to join a union.”

To donate to Greater Boston Workers United’s emergency strike fund, set up with the solidarity of the Greater Boston Labor Council, readers are encouraged to go to tinyurl.com/yc57wu2t. Check for updates and solidarity opportunities on Twitter @BostonSBWU.

Steve Gillis is a 37-year elected leader of the Boston School Bus Drivers Union, USW Local 8751, now retired from driving, and is working for the union’s members.