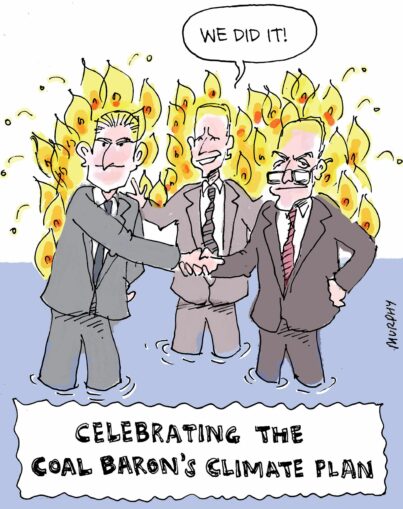 Politicians and media pundits are lauding the yet to be passed $369 billion Inflation Reduction Act as “the most ambitious climate action” ever taken by Congress. However, considering that the U.S. Congress has never passed any significant climate legislation, the praise is a bit of a stretch. And the devil is in the details.

In a surprise move July 28, Senator Joe Manchin and Senate Majority leader Chuck Schumer announced legislation that includes hundreds of billions of dollars for climate and energy programs. The announcement was all the more shocking considering that Manchin is a coal company millionaire, who has received more campaign cash from the oil and gas industry than any other senator.

While Manchin is not the only senator with strong ties to the energy industry, the act could easily be called the “Benefit Joe Manchin” bill. Among its key provisions are generous tax credits for technologies like carbon capture and storage and low-emissions hydrogen fuels — long supported by the West Virginia senator.

President Joe Biden and Congressional Democrats — so eager to pass any legislation prior to the midterm election — are willingly overlooking major provisions of the bill that clearly benefit the oil and gas industry. If enacted, they claim it would enshrine climate change action in law, making it more difficult for future administrations to roll back these measures.

And that, according to critics, is a big part of the problem.

Wenonah Hauter, executive director of the climate advocacy group Food and Water Watch, stated the deal “won’t solve the climate crisis and may make it worse.” (New York Times, July 30) She is referring to key provisions of the bill that would actually expand oil and gas production.

The Center for Biological Diversity notes that, buried near the end of the 725-page bill, are provisions that would “require massive oil and gas leasing in the Gulf of Mexico and the Cook Inlet in Alaska, reinstate an illegal 2021 Gulf lease sale and mandate that millions more acres of public land be offered for leasing before any new solar or wind energy projects could be built on public lands or waters.” (commondreams.org, July 28)

In January a federal judge actually overturned a proposed 80-million-acre lease sale in the Gulf of Mexico, because the Interior Department failed to address the climate harms from the leases. If passed, the Inflation Reduction Act would prohibit the granting of any renewable energy projects on public lands or waters, if the Interior Department fails to grant these offshore drilling leases.

Expanding tax credits for carbon capture technology allow coal- or gas-burning power plants to keep operating with lower emissions. Democratic “leaders” apparently promised Manchin that they would speed up the process of issuing permits for energy infrastructure, including a natural gas pipeline in West Virginia.

Should it pass, what the bill will not do is meet established goals for cutting emissions in half by 2030, as the Democrats promised last August.

So, what’s in it for the average worker? The answer is not much.

Those able to afford a high-priced electric vehicle could receive a tax credit. Some homeowners could get rebates for making their homes more energy efficient. Neither of these measures promise any reduction in the current inflationary cost of gas and oil.

There is some talk of reducing the cost of prescription drugs and extending enhanced subsidies for the Affordable Care Act. Some provisions could result in higher taxes, but again the details are murky.

Unlike earlier bills promoted by Biden, the Inflation Reduction Act carries none of the administration’s initial promises of broader benefits like child care tax credits, student loan reduction or investments in education or public transportation.

However the politicians and pundits try to sell it, what is clear is that the legislation holds no hope of relief for the millions of people impacted by the fires and floods that are ravishing entire communities right now.

Brett Hartl, government affairs director at the Center for Biological Diversity, labeled the bill “a climate suicide pact” noting: “The new leasing required in this bill will fan the flames of the climate disasters torching our country.”