Continuing the breakthrough of union drives in the U.S., workers at Trader Joe’s in Hadley, Massachusetts, won a 45-31 vote July 28 to become the first unionized store in the trendy grocery store chain. The corporation has more than 530 locations across the U.S., with 10,000 employees and an estimated 2022 revenue of $13.3 billion. 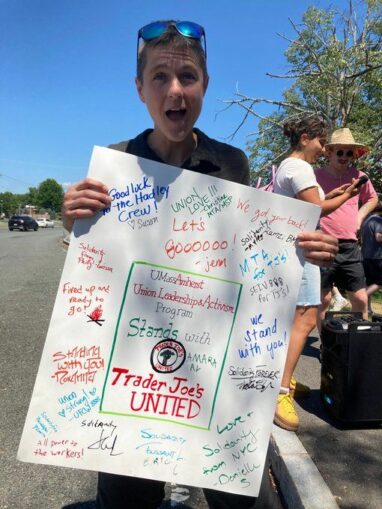 Sarah, a worker for 18 years at Trader Joe’s, organizes for the ‘yes’ vote.

Organizers at the Hadley store, which is about 100 miles due west of Boston, launched their union campaign in May through an open letter to company CEO Dan Bane, citing concerns about pay, benefits and safety. The 81 workers at the store — called crew members by the company — were eligible to vote in the election supervised by the National Labor Relations Board.

On the Twitter feed of Trader Joe’s United, Sarah, who has worked at the company for 18 years, said: “I’m voting YES because as a captain [store leader] and now crew member, I watched the company put profit over the well-being of the crew repeatedly. It’s time for us to have a say in the decisions that affect our lives. That means a union, and that means a contract.” (July 28)

Trader Joe’s United, an independent union, is now posting forms on Twitter so workers at other stores can contact them about how to unionize: “Fellow crew, want to organize your store but don’t know where to start? Reach us thru our contact form.”