The Paul Robeson House Museum sponsored a panel discussion at the Philadelphia Museum of Art July 10, featuring Philadelphia activists who contributed to the Museum’s recently released book, “How We Stay Free.” The book is described as “an anthology-in-action for an uprising that remains unfinished.” 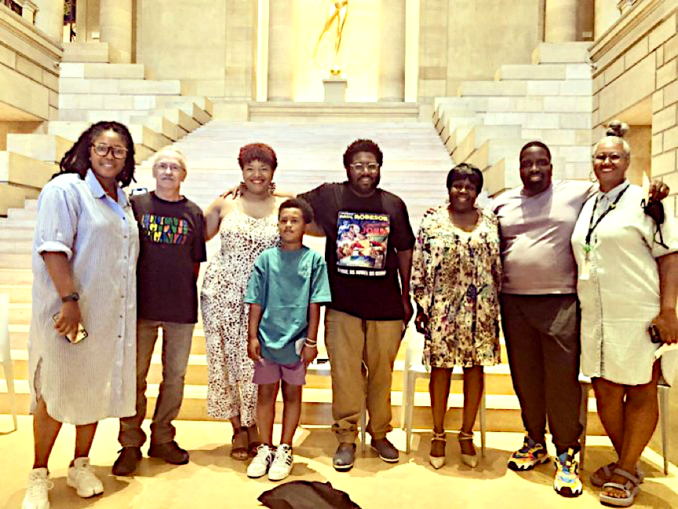 It chronicles the summer of 2020 in Philadelphia, which like much of the world was embroiled in Black Lives Matter, anti-police brutality protests responding to the Minneapolis police murder of George Floyd. “How We Stay Free” includes testimony, personal reflections, prose, poetry and photographs from several predominantly Black activists and organizations.

Co-Editor Christopher Rodgers hosted the discussion. The event was organized by Shivon Love, an education curator with the Museum of Art.

Workers World newspaper is honored that one of our major contributing photographers, Joe Piette, is featured in the book and was part of the panel discussion.

Philadelphia-born and raised Karen Asper Jordan was 16 years old when Cecil B. Moore led the struggle to integrate Girard College, close to Jordan’s home but not accessible to her as a young Black woman in 1965. She described police barricades and press vilification of protesters during the seven-month struggle, during which demonstrators sang loudly all day long to the dismay of white students inside the college walls.

At age 17, Asper Jordan was arrested at a demonstration at the post office, demanding equal treatment in hiring for Black women, and again in 1967 during a demonstration against racism in the school district. “I got involved and never stopped.” Today she is a retired nurse, who continues to advocate for justice, equality and human rights. Jordan cautioned that “the fight for justice and equality is constant and might get worse before it gets better, but know you can always do something to make a difference.”

Abdul-Aliy Abdullah Muhammad, born and raised in West Philadelphia and a Black, queer and nonbinary activist, described becoming politically aware as a high school student just after the U.S. invaded Afghanistan and was pushing its war in Iraq. Their organizing in the nonprofit community around HIV/AIDS exposed the tension between staff and managers in this health field and led to their helping to establish the Black and Brown Workers Cooperative.

They recalled the brutal murder of Black trans woman Dominque Remi Fells in June 2020 and strongly criticized social media for releasing news of her death before her family was notified. They first became aware of Fells when asked to participate in a “Say their name” event, where they met Fells’ mother.

Abdullah Muhammad called on the movement to center the people who are victims of state-sanctioned violence — not as bodies but around how they were seen by their families and loved ones, describing Fells as “a nerd, a teachers’ pet, the cousin and sister who protected siblings and a lover of fashion design.”

Born and raised in Atlantic City, New Jersey, before moving to Philadelphia, Koren Martin described her awareness of segregation when forced as a child to only use Chicken Bone Beach, which was set aside for Black families. Her interest in photography stemmed from her mother’s oral history through photography of the impact of gentrification on Atlantic City and Philadelphia. Martin’s contributions to the book include photos from a protest for Mumia Abu-Jamal and a protester carrying a “Free Ant Smith” sign.

She began to use her camera as a visual “storyteller” focusing on Black women, both in the forefront of community struggles and as parents and often primary caregivers. Martin stressed the importance of networks of care, noting how much Black mothers sacrifice in order to take part in activist work.

‘You can’t helicopter into a protest’

Well-known movement photographer Joe Piette contributed pictures from the protests on or around the Art Museum steps, including one of the infamous “Rocky” statue on which hung a sign reading “No Justice, No Peace.” Another depicted chalk on multiple museums’ steps, calling out fascists as “bound to lose” — a reference to a Woody Guthrie song.

Born in St. Catharines, Ontario, Canada, Piette became aware of racism when his Québécois immigrant family moved to Lockport, New York, where he grew up in a low-income, multinational, working-class neighborhood.

Later Piette was drafted and served time in the U.S. Air Force during the war against Vietnam. He returned to the U.S., determined to understand what forces were behind the war, got involved in the antiwar movement and subsequently joined Workers World Party.

When Piette moved to Philadelphia in 1985, shortly after the city dropped a bomb that destroyed 61 homes in West Philadelphia and killed 11 members of the MOVE organization, he contributed his photographic skills to help the movement and “expose the crimes of capitalism and wealthy imperialists” and to “show the humanity and courage of resistance.”

Piette, who has over 23,000 pictures in hundreds of albums on Flickr, stressed that these albums should not be seen as “separate, but one movement with different parts. These photos are not meant to be hung on a wall. They are meant to help the movement grow and get to the point where revolution is possible. All these issues can’t be solved under capitalism. We need socialism.”

Asked to summarize what lessons he had learned from his work, Piette responded, “You can’t helicopter into a protest and take pictures. You have to understand what people are saying and why. You have to show respect, ask permission to take pictures and show care not to post photos that could be used by police to incriminate activists.

“I offer my photos to organizations so that people around the world can know what is happening in Philadelphia. One example of why this is important stems from the struggle in Ferguson, Missouri, in 2014, when images of Black activists being tear-gassed were shared around the world. Palestinians, well experienced in dealing with tear gas from Israeli forces, sent messages to people in Ferguson offering advice on how to deal with its impact.”

How We Stay Free is available through CommonNotions.org.