The following article is excerpted from an article that first appeared in Haitiliberte.com, July 7, 2022. The full article can be found at tinyurl.com/3bxf5tcb. 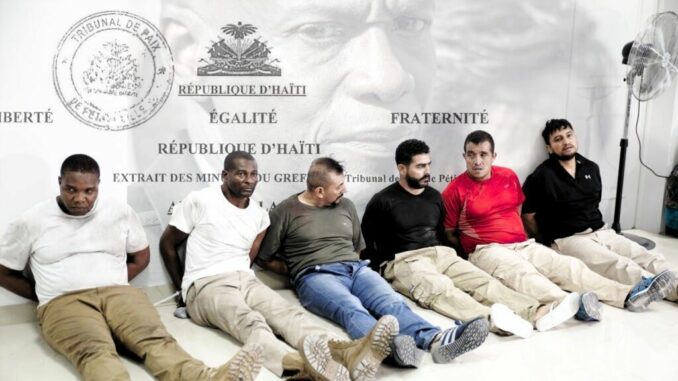 Some Haitian-American and Colombian mercenaries arrested for participation in Moïse’s assassination.

It’s been one year since Haiti’s President Jovenel Moïse was machine-gunned at home in front of his wife and children.

The murder was carried out by a commando of Colombian assassins, presumably in the service of Haiti’s political and economic oligarchs, whose identities are still unknown. For a year, this case has been in the hands of examining magistrates. For a year, five investigating judges, appointed by the Dean of Port-au-Prince’s High Court, Bernard Saint-Vil, have received and then passed on the case, not one of them making any headway. In short, the investigation has gone almost nowhere in a year, and the most horrific magnicide of modern times remains unsolved.

Nonetheless, several people have been arrested in Haiti, Jamaica, the Dominican Republic, Turkey and Panama. Most of them are now imprisoned in Haiti, but the most important ones are held in the United States.

Others are still on the run, like Joseph Félix Badio, the alleged mastermind of the plot, believed to be somewhere in Haiti. Haitian-Jordanian businessman Samir Handal was arrested in Ankara, Turkey, in November 2021. Haiti requested his extradition, but the Istanbul Criminal Court released him on Monday, July 4, 2022, saying that the documents provided by Haiti’s justice officers did not make clear how Handal was concretely implicated in the crime. As a result, Turkey rejected Haiti’s extradition request and freed Handal.

Some actors are also dead. In addition to three Colombian mercenaries whom Haitian policemen killed in the gun battles after the assassination, there is the case of businessman and former coup-plotting police chief Marie-Jude Gilbert Dragon, who died in Port-au-Prince’s National Penitentiary, reportedly of COVID-19.

These suspects are being held in the U.S., at least in part because some of them have worked with and for the U.S. government. Indeed, in April a federal judge in Miami allowed the U.S. government to withhold from Palacios’ defense attorney unspecified evidence on the grounds that it was a “potential threat . . . to [U.S.] national security.” Meanwhile it’s a matter of record that Jaar was previously a Drug Enforcement Agency (DEA) informant.

The Haitian state, being totally dependent on and, indeed, installed by Washington, will find it nearly impossible to bring back to Haiti any of these suspects to answer for their actions.

At the same time, at least three businessmen who are also U.S. citizens — Antonio Intriago, Walter Veintemilla and Arcangel Pretel Ortiz — hired and helped finance, from U.S. soil, the Colombian mercenaries who killed Moïse. But not one of the trio has been charged or arrested.

By supposedly wanting to protect its informants, the Biden administration is only making more credible charges that, at the very least, Washington was aware of the coup. The links between the most prominent alleged criminals and U.S. intelligence services deepens this suspicion. It is evident already that many of those involved in the plot were either “dormant” or perhaps still active U.S. agents.

Meanwhile, former Senator John Joël Joseph snuck into Jamaica after the assassination with his wife and two children, lived clandestinely in a remote village named Elizabeth but was squealed on and picked up by the local police. In May he was extradited to the U.S. Currently, there are 40 individuals of various nationalities suspected of participation in Moïse’s assassination who are under lock and key in Port-au-Prince without any of them being tried or sentenced.

A gang currently occupies the halls of justice. The prime minister apparently communicates with the man, his friend, who ordered the murder. The U.S. is holding three of the key suspects and withholding evidence. The ruling groups, who are surely the intellectual authors and chief financiers of the assassination, until today remain unknown and control most of Haiti’s politicians. What a challenge for justice to be found for this grisly crime!