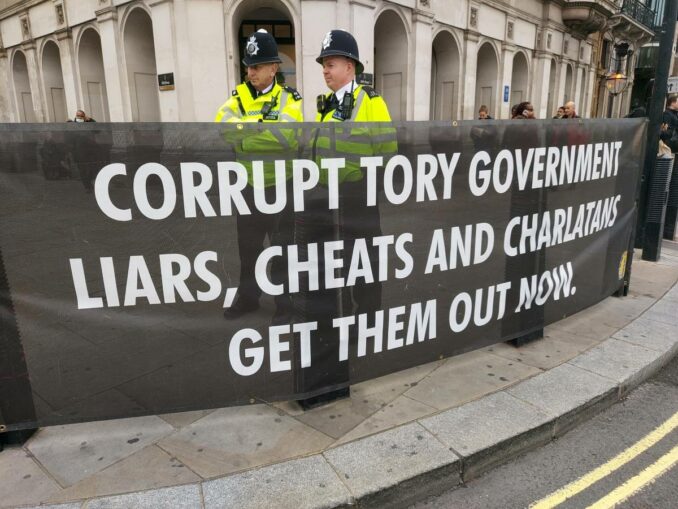 Boris Johnson’s hypocrisy plus anti-popular policies finally did him in.

The resignation of Boris Johnson as leader of the Conservative Party of Great Britain, which means he will be replaced as prime minister, was not just the comeuppance of a slapdash serial liar, forced out of office by 59 cabinet resignations in 40 hours.

The leadership of the Conservative Party had come to the conclusion that Johnson, aka Mr. Brexit, didn’t have the wherewithal to reach a new agreement with the European Union over the north of Ireland, to deal with the growing anger over the cost-of-living crisis in Britain, immigration — sending refugees to Rwanda is not a real solution, labor shortages and the economic and political problems created by the conflict in Ukraine.

Britain, which consists of the nations England, Scotland, Wales and the British-occupied north of Ireland, is the fifth largest economy in the world and a major military power.

On news of Johnson’s resignation, Volodymyr Zelensky, the president of Ukraine, called Johnson to express his “sadness” and to say “Ukrainian society greatly sympathizes with you.” (Le Monde, July 8) Johnson, a strong supporter of U.S./NATO’s military pressure on Russia, had visited President Zelensky twice during the war and held frequent phone conversations.

In May inflation in Britain hit a 40-year high of 9.1%, the highest in Europe and the highest among the G7 leading imperialist economies. All European economies are suffering from a spike in energy prices, but one of the side effects of Britain’s exit from the European Union is that Britain is hit the hardest.

Washington has forced its European allies to impose sanctions — embargoes on Russian exports. What makes the embargoes politically unpalatable is that the rising energy prices give Russia rising revenue on its exports at the same time they damage European economies. (bloomberg.com, July 8)

Inside Britain, The Rail, Maritime and Transport Workers (RMT) conducted a series of one-day strikes in June that halted most train service. The union demanded better working conditions, higher pay and to avoid layoffs. The pay raise the RMT is seeking is below the expected rate of inflation but more than that of most recent union contracts.

RMT leader Mick Lynch managed to publicize his union’s positions, which helped win the battle for public support, confronting Johnson and the corporate media’s Red-baiting of the RMT. When a popular morning television host asked Lynch if he was a Marxist, he shot back: “You do come up with the most remarkable twaddle sometimes.” (New York Times, July 2)

The Labour Party, currently the official opposition in the British Parliament, describes itself as a coalition of social democrats, democratic socialists and trade unions. In the RMT strikes, which affected millions of commuters, it took the position that: “We do not want to see these strikes go ahead with the resulting disruption to the public.” (Guardian, June 20) The left-wing of Labour opposed this position as anti-union and pushed back hard.

Beyond the RMT, the Communication Workers Union, which represents postal workers; the Independent Workers’ Union of Great Britain — gig food delivery; United Voices of the World — hospitality; and some British Airways staff are preparing job actions. (AlJazeera, July 2) To hold a legal strike, unions in Britain must overcome bureaucratic restrictions.

Besides the unions preparing for a summer of discontent, The Joseph Rowntree Foundation, an anti-poverty group, reported the last week of June that “7 million U.K. households have missed out on food or essentials like showers and toiletries this year, because they couldn’t afford them.” Some 2.3 million households “did not have the choice between heating their home or having enough food — because they couldn’t afford to do either.” (bigissue.com, June 29)

The cost-of-living crisis occurred because inflation cut into real wages; companies indulged their drive to increase profits by imposing price hikes, using inflation as an excuse/cover, and the cycle repeated.

A committee of the Conservative Party sets out the rules for selecting a new leader, who will become the new prime minister, because the party has the majority in Parliament. The possible candidates are richer and older than the majority of people living in Britain. It is unlikely that they will make any major changes in Johnson’s anti-worker and pro-war policies.