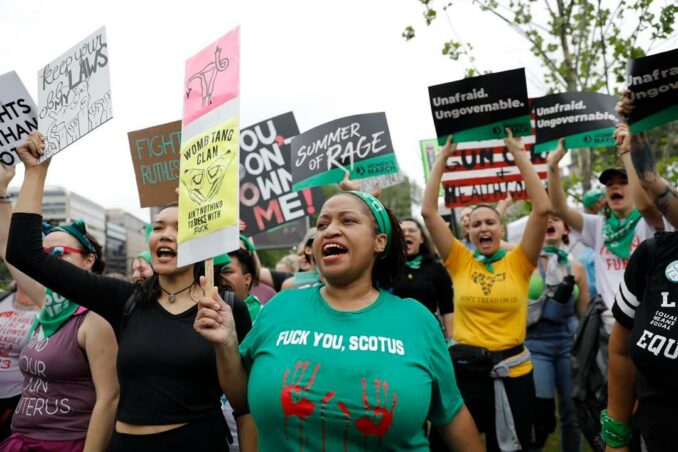 Thousands of women and people of all genders, nationalities and ages, who gathered in Washington, D.C., on July 9, turned out to protest the outrageous decision handed down by the Supreme Court on June 24, outlawing abortions. By a 5-4 vote, the reactionary, unelected, appointed-for-life justices nullified the legal right to access abortions, overturning the court’s decision in the 1973 Roe v. Wade case. Unsurprisingly, their opinion is rife with arrogance and misogyny.

Hundreds of protesters risked arrest at the White House gate, objecting to the Court’s ruling and to state abortion bans, which are cruel, tyrannical and dismissive of the rights of pregnant people to bodily autonomy, decision-making and safe medical care. These render women and others who can become pregnant subordinate to the rule of misogynist, racist and classist judges, legislators and governors.

Demonstrators pressured the Biden administration to protect abortion rights, and they were dissatisfied with his inaction and ambiguous executive order issued July 8. They demanded he declare a public health emergency on abortion, which could free up federal funds for local governments to expand access and codify reproductive rights through executive action. Biden wants Congress to do this, but activists aim to push him as far as possible.

Democrats are in disarray over what to do about the SCOTUS ruling. It took two weeks after the Court’s final opinion was publicized for the Biden administration to respond with some measures, although ultraright Justice Samuel Alito’s draft opinion was leaked May 2.

When SCOTUS issued its thoroughly horrific, anti-woman decision, it enraged the millions of people who support legal abortion and the many who will be personally affected by the Court’s ruling.

Biden’s administration is not treating this as a public health emergency. But it is. 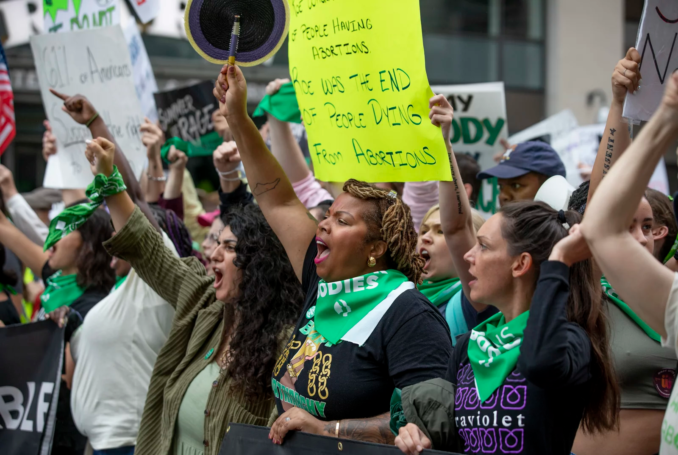 Biden spoke July 8 because he had to respond to the rage unleashed countrywide against the Supreme Court ruling. His comments disappointed the majority who want the administration to propose a concrete plan to protect abortion rights.

He outlined measures his administration would implement to protect abortion rights through a presidential executive order. This is supposed to ensure access to reproductive health care, including medication abortion (by pills), emergency contraception and protection of patients’ privacy. But how all of this will be done is unclear.

And what will the administration do with Republican-led states that ban medication abortions, when the federal Food and Drug Administration has mandated their use for all U.S. residents? Will the administration fight back if recalcitrant states defy the FDA rules? And how will pregnant people who travel out of state for abortions get federal legal protection?

What Biden said was vague and no comfort to those who will need abortion services. What was not vague was that his administration will not intervene to reverse the horrific bans enacted by conservatives in half the states. This is a terrible blow.

Coming up with a plan of action within 30 days, based on “existing” laws, was relegated to Secretary of Health and Human Services Xavier Becerra, who said there is no “magic bullet” to restore abortion access.

Biden could galvanize his administration to strengthen abortion services in states where the procedure is legal, support doctors facing medical and legal dilemmas and help pregnant people travel out of state or obtain abortion pills online. The administration must be adamant that all medical emergencies, whether ectopic pregnancies, miscarriages or infections, can be treated in hospitals without punitive retaliation. 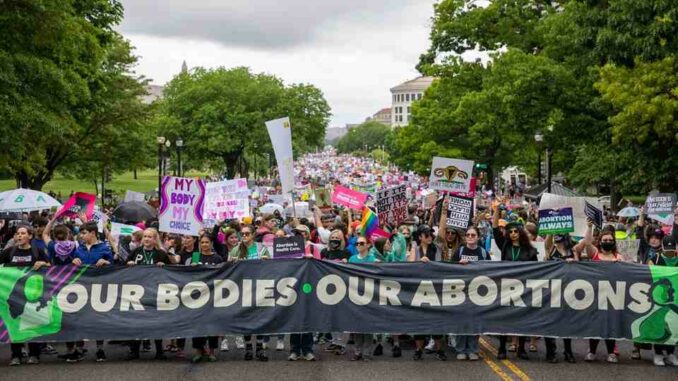 Need for action, not words

Angry pro-choice activists, especially youth, want action, not words. When Biden was pushed to do more to protect the right to abortion, his response was “Vote, vote, vote” in November midterm elections for candidates who support legalizing abortions.

Reproductive rights advocates say Biden’s words are “too little, too late.” Democratic politicians, who tell everyone to wait and vote in November, are losing credibility due to their cowardly inaction in this nationwide crisis.

Some activists say the administration took a good first step, but many have demanded a declaration of a health emergency, which would ensure federal assistance for those living in anti-abortion states who seek medication abortions or out-of-state care. Some pro-choice advocates suggest using federal land to set up clinics to perform abortions. Biden could do that but said it’s “unworkable.”

Biden called for lawyers to represent pro bono those prosecuted by states with abortion bans. He said the Federal Trade Commission would protect the privacy of abortion seekers searching for information online, who face arrest in the hostile states.

The president asserted that abortion seekers, doctors and clinic operators would be protected, but he did not specify how this would be done or who would do it. In the past, anti-abortion extremists have bombed family planning clinics, stalked and murdered medical and other staff and volunteers.

Some of Biden’s major supporters have instructed him to find a way around the SCOTUS ruling and state abortion bans, now implemented in 13 states with 12 ready to criminalize the procedure. Several bans apply from the moment of fertilization!

Some states even criminalize emergency abortions for people with life-threatening medical problems. Where does that leave the ill patient or doctor facing this dilemma?

The story of a 10-year-old rape victim who had to travel out of Ohio to obtain an abortion is just one horror story of many. Can anyone discount that child’s fear and anguish? Apparently, right-wing judges and legislators can. And they call themselves “pro-life” and “pro-child.” What a travesty!

These same forces oppose government funding and services needed to raise healthy children. One might think abortion opponents would push for essential benefits for families. Not so. The same politicians who oppose abortions have vetoed funding services for children and parents, like food programs or Medicaid expansion.

The SCOTUS ruling and state bans are traumatizing pregnant people and worrying clinic staff, who are afraid to do anything allegedly illegal. They will disproportionately affect Black, Latinx, Indigenous, immigrant and low-income women. The campaign of terror is deliberately aimed at them to perpetuate racism and discrimination. The ultraright forces behind these heinous bans and restrictive laws deliberately strive to perpetuate this oppression.

The counter to the SCOTUS ruling and state abortion bans is mass protests and more mass protests, using every tactic, civil or not. The Women’s March is calling for a “Summer of Rage.” Join those demonstrations or any you can. Or organize one. Boycott. Occupy. Block the streets. Strike. Rally.

This malevolent right wing has to be pushed back by a fierce, militant, independent mass movement composed of women and all who can get pregnant, people of all nationalities and genders, workers, immigrants, LGBTQ+ people, youth, individuals with disabilities and all progressives.