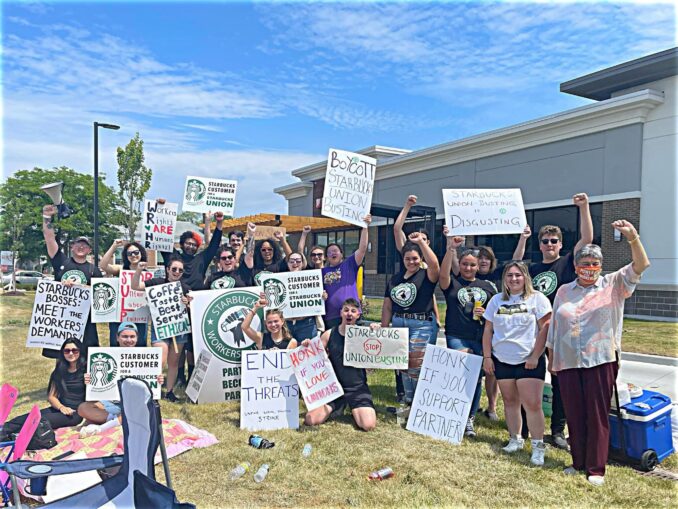 Buffalo Starbucks workers at the 3611 Delaware Ave. location went on strike July 8 against Unfair Labor Practices and union-repression by the company. Many workers at this location were formerly working at the Sheridan and Bailey location, which was shut down weeks ago, causing the workforce to relocate.

The reason given by the company for the shutdown was “maintenance,” but this was the same reason given for closing the Walden and Anderson location and many others. The company uses maintenance and construction as a pretext for shuffling workers around at stores with strong union support, disrupting union activity and cutting hours from workers’ schedules.

In addition to being relocated to a new store, the workers at the Delaware Avenue store have been facing understaffing and a refusal by the company to solve basic problems in the store. Management is holding their support for the union against them, telling workers things like “you chose this when you voted for the union.”

In attendance at the picket line were Starbucks workers from other locations across the district, even some recently fired workers who were prominent organizers, such as Victoria Conklin. Members of the community stopped by the picket to show support, including organizers from Communications Workers (CWA) Local 1168, Buffalo DSA, Workers World Party’s Buffalo branch and some passersby.

This strike is one of many Starbucks strikes erupting across the country over union busting and a massive list of Unfair Labor Practice charges. The very next day, the first unionized Starbucks on Elmwood Avenue. in Buffalo also went on strike.

These Buffalo strikes follow strikes in Seattle, where eight stores went on strike at the same time. Workers at Pike Place Market, the infamous first Starbucks location in Seattle, joined the strike after being forced to reapply for their jobs. This strike has been joined by other stores in Seattle, Chicago, Pittsburgh and Dallas, making the multistore work stoppage the largest concurrent strike so far in the union campaign.