Shinzo Abe, the right-wing former Japanese prime minister, was assassinated July 8 during an election campaign rally in the city of Nara, a former imperial capital. Reports from Nara show a man shooting Abe from behind at close range with a homemade weapon, firing two shots. 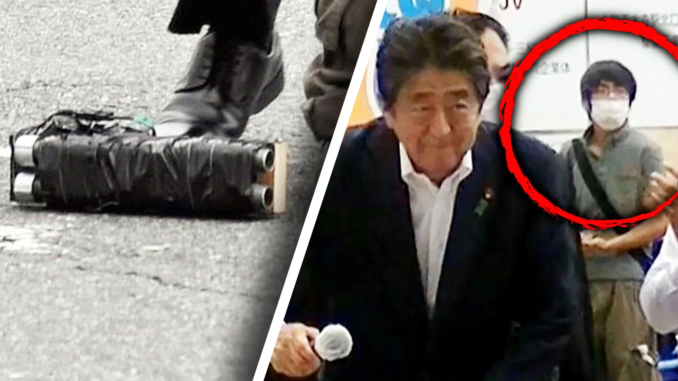 Abe speaking with the alleged assassin behind him. Picture of handmade gun on left.

The 67-year-old Abe, who retired two years ago giving reasons of poor health, was still powerful within the Liberal Democratic Party. The LDP is a conservative, pro-capitalist and pro-imperialist party that has ruled Japan for most of the last seven decades.

The LDP won an election July 10 for the upper house of parliament by an even larger margin than anticipated. Some say the LDP gained a sympathy vote with Abe’s assassination.

No one has indicated that the assassination would result in substantial changes in Japanese international or domestic policies. It does throw a spotlight on Japanese imperialism’s role in the world.

While Japan’s only current direct colony is Okinawa — whose population suffers from Tokyo’s rule and from the occupation by U.S. military bases — it is still a major state power in the imperialist alliance headed by the United States.

After the Japanese government and military surrendered to U.S. imperialism in 1945, soon after the U.S. dropped atomic bombs on Hiroshima and Nagasaki, killing hundreds of thousands of civilian. World War II ended in the Pacific, not least because the Japanese ruling class wanted to avoid surrendering to the Soviet Union.

The U.S. military then occupied Japan and imposed laws preventing the rearmament of the Japanese Armed Forces. Over the years, Washington’s policy evolved as the U.S. rulers adopted a policy of using Japan’s military against the Soviet Union, People’s China and the Democratic People’s Republic of Korea.

Such rearmament was far from popular in Japan. The LDP in general and Abe in particular pushed for a more rapid militarization of the Japanese Armed Forces. Abe was known as a Japanese nationalist — that is, chauvinist — and this fit U.S. military strategy, whatever reluctance Abe might have had about Japan being subordinate to Washington.

Like Donald Trump in the U.S., Abe was known for refusing to apologize for the past war crimes of Japanese militarism before and during World War II.

Korea was the first nation Tokyo seized after joining the imperialist world. The opinions of a Korean liberation group, Nudutol, regarding Abe’s role, are on target.

“A powerful figure among Japan’s right wing,” Nudutol wrote on twitter, “Abe was an apologist for imperial Japan’s war crimes and supported U.S. imperialist efforts in the Asia Pacific.”

“In October 2018, South Korea’s Supreme Court issued the opinion that Japanese corporations that used slave labor from Korea during WWII must pay $89,000 in reparations to surviving slave laborers. In response, Abe declared a trade war.”

Nudutol pointed out that the Abe regime revoked subsidies for the Korean schools serving Koreans living in Japan and in general made life harder for them.

Shinzo Abe upheld U.S. imperialism in Asia, taking a hard line against North Korea and China, and he actively contributed to continuing the legacy of Japanese colonialism by denying Japan’s war crimes against enslaved Koreans. Nudutol said that Abe was a member of Nippon Kaigi group, which they characterize as “fascist.”