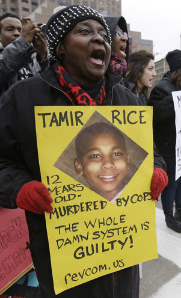 Timothy Loehmann, the cop who killed 12-year-old Tamir Rice in Cleveland in 2014, was sworn in as Tioga, Pennsylvania’s lone police officer July 5. On July 6, protesters demonstrated outside the north Pennsylvania Tioga Borough office. The firestorm of outrage from borough residents and others forced Loehmann’s resignation July 7.

Borough Mayor David Wilcox, who swore him in while acknowledging Loehmann was the cop fired by Cleveland, claimed the council hadn’t allowed him to see Loehmann’s resume when he was hired. (Sun Gazette.com, July 7)

On Nov. 22, 2014, Rice, a Black child, was outside a Cleveland recreation center with a pellet gun. Responding to a 911-call, Loehmann and his partner Officer Frank Garmback pulled up to the gazebo where Rice was playing with the pellet gun. Loehmann shot and killed Rice within 12 seconds of exiting his car.

While both officers claimed they gave Rice several warning commands, there were no witnesses to corroborate their story. In conflicting accounts, the officers said Rice was “holding the pellet gun” and that Rice was “reaching for the gun.”

Nonetheless a 2015 grand jury failed to indict Loehmann. In 2017, he was fired for neglecting to disclose he had been allowed to quit his job with the Independence, Ohio, police department, after showing “a dangerous lack of composure” during firearms training.

In October 2018, a decision by the Bellaire, Ohio, police chief to hire Loehmann also led to community protests that forced Loehmann to withdraw his application.

In July 2021, the Ohio Supreme Court denied Loehmann’s appeal to get his job back. However, this January the U.S. Department of Justice refused to reopen the case against the two officers. The Department had quietly closed the case in 2020, while President Donald Trump was in office.

Samaria Rice, Tamir’s mother, said: “He [Loehmann] shouldn’t be a police officer anywhere in the United States.” The family’s attorney Subodh Chandra stated: “While it’s great that Loehmann will not be inflicting himself with a badge and a gun upon Tioga, borough officials need to be held accountable for their appallingly poor judgment and ineptitude. . . . This game of whack-a-mole with Loehmann shamelessly resurfacing as a cop elsewhere must end.” (Philly.com, July 8)