Brittney Griner is a 31-year-old, 6-foot, 9-inch center for the Phoenix Mercury in the Women’s National Basketball Association. As a college player for the Baylor Bears in Waco, Texas, she is a former Associated Press Player of the Year and a two-time Olympic gold medal winner. Griner, who is Black and a lesbian, is also a WNBA champion. 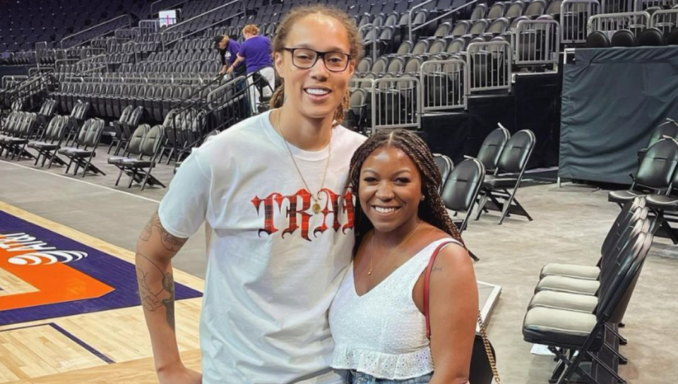 Griner has been outspoken since 2020, when she opposed the playing of the national anthem before basketball games in protest of the 2020 racist police murder of Breonna Taylor, a 26-year-old Black medical worker in Kentucky.

As most of the world knows by now, Griner was arrested Feb. 17 at a Moscow airport for possessing hashish oil in her luggage after flying from New York. She remains incarcerated to this day.

She had played for a Russian Premier League team during the WNBA offseason, since WNBA players’ salaries are significantly lower compared to their male counterparts in the NBA, forcing them to seek employment outside the U.S.

Under Russian law, a conviction of illegal drug possession can carry a sentence up to 10 years in prison.

Many desperate appeals have been made by Griner, her spouse Cherelle Griner, and WNBA and NBA players to Russian President Vladimir Putin and to President Joe Biden to release Griner by way of a prisoner swap.

Griner pled guilty on July 1, saying that the drugs were “inadvertently” in her luggage, with the hope her guilty admission will help her avoid a prison sentence. Her trial is scheduled to resume later this month.

Bill Richardson, former governor of New Mexico and former U.S. ambassador to the United Nations, is reportedly planning a trip to Russia to negotiate for her release without the official endorsement of the State Department.

It is understandable that so many people want Brittney Griner back home, especially her family, friends and the sports world, who are in so much pain. Cheryl Griner has accused Biden of not doing enough to bring her life partner back home.

It is important to put into political context that Russia is not the same as the former Soviet Union with progressive laws on the books. Since the collapse of the Soviet Union 30 years ago, Russia has developed a capitalist economy riddled with social divisions and inequalities. President Putin is not a proponent of LGBTQ+ rights, and so far he has not been inclined to intervene in the legal proceedings to insure Griner’s release.

The bigger factor is that the U.S. and its NATO allies are at war economically and politically with Russia, a war grown sharper during the military conflict in Ukraine. It is not beyond comprehension that the Biden administration would use Griner as a political pawn to further deepen anti-Russia sentiment amongst the U.S. masses.

So it is important to continue to put pressure on Biden to do everything possible to bring Brittney Griner home, while at the same time demand that the U.S. and NATO stop their intervention in Ukraine, which they are doing to promote their own imperialist interests.