As a wave of union organizing spreads to Starbucks coffee shops across the country, workers at an REI retail outlet here announced at a June 30 press conference that they are going union too. 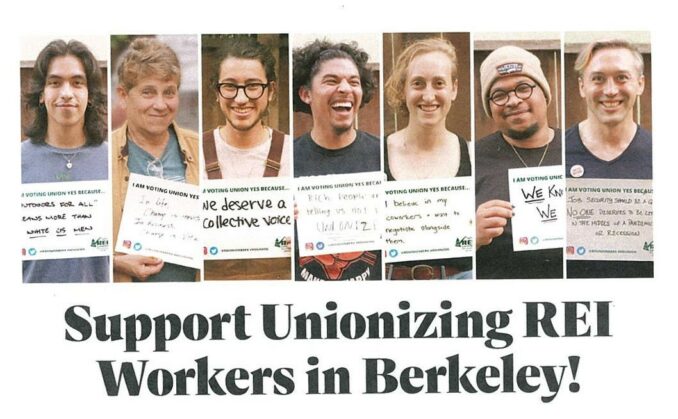 A 175-store chain with 15,000 employees, specializing in outdoor recreational gear, REI has only one union store so far — in the SoHo neighborhood of New York City. Berkeley’s effort by United Food and Commercial Workers Local 5 is a bid to be the second.

UFCW organizer Jim Araby, referring to the expanding union growth across separate companies, said, “We’ve got to build this movement and coordinate the different parts. The union side at different workplaces needs to work together and not allow ourselves to be separated into different little fiefdoms.”

Jules Geritz, a member of the union organizing committee at the Berkeley store, where he’s worked for nearly 10 years, said the campaign had strong support from the people of Berkeley, including unanimous backing from the City Council. Kathryn Lybarger, president of the University of California’s largest employee union, AFSCME Local 3299, based in Oakland, also spoke encouraging words to the union activists at the REI store.