The following is one installment of Feinberg’s “Lavender & Red” series on the intersection of LGBTQ2S+ and socialist history, which appeared Sept. 27, 2007, in Workers World newspaper. The 120-part series was published between 2004 and 2008 and can be downloaded for free at workers.org/books. 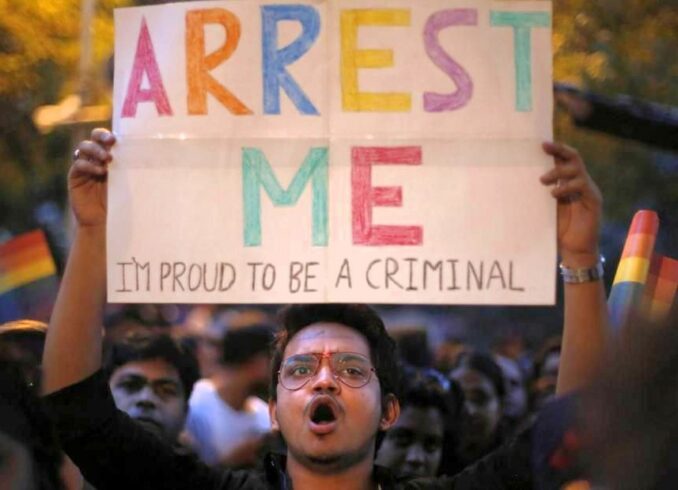 Sodomy laws, imposed on India in 1861 by British colonizers, were still in force at the time of this 2013 protest.

Wherever class-divided societies overturned matrilineal-communal groupings, laws began to punish sexualities, gender expressions and bodies that did not fit the new patriarchal family models. The status of women, who had played a pivotal role in pre-class societies where the blood line was traced through females, not males, was degraded with the ascendancy of patriarchal class rule.

The ruling class mandated adherence to a father-dominated family unit, rather than the ancient mother-right gens, because it assured the transmission of wealth to male heirs.

As ruling classes grew stronger and expanded their territories by overthrowing neighboring communal societies by force of arms, they violently enforced their legal codes and social order on militarily conquered peoples.

These Indigenous societies under siege were diverse. For instance, the Gay American Indians History Project, first published in the germinal 1988 book “Living the Spirit,” lists 135 Indigenous peoples on the North American continent, who made room for many more sex/gender roles than the European nations did.

Midnight Sun (Anishnabe) provides a historical-materialist view of sex/gender systems in these varied Native societies in one of the book’s essays. Entitled “Sex/Gender Systems in Native North America,” it explains: “Social, and specifically sexual, life is embedded in the economic organization of society — an organization that gives rise to a variety of cultural forms.

“The cultural construction of gender and sexuality must be seen in terms of the sexual division of labor, subsistence patterns, social relations and male-female relations. Within this context, ideology is not an arbitrary, discrete force — rather, it serves to reproduce and perpetuate social forms, behaviors and individuals suitable to a particular mode of production.”

The roots of Abu-Ghraib

European colonialism exported its domestic, counterrevolutionary Inquisition around the world, starting with Portuguese expansionism around 1500 C.E. The early epoch of direct colonial rule reached its zenith more than three centuries later with British domination of India in 1857.

Queer Heritage reports that in 1551, “Portuguese missionary Father Pero Correia, writing from Brazil, asserts that same-sex eroticism among Indigenous women is quite common, in fact as widespread as in Africa, where he was previously stationed. Native Brazilian women, he observes, carry weapons and even form same-sex marriages.”

In 1646, Portuguese colonial overlords expanded their laws against same-sexuality to include females, as well as males. The sentence was being burned alive at the stake.

Max Mejía states that with the arrival of the Spanish conquistadors in the Western hemisphere, “An absolutist discourse enveloped homosexuality in the concepts of ‘infamous sin,’ ‘sin against nature,’ corruption of the soul and alliance with the devil. They punished the practice without distinctions, among both lay people and clerics.

“Furthermore,” Mejía concludes, “the conquerors treated ‘sodomy’ as a special Indian sin and hunted it down and punished it as such on a grand scale. They orchestrated crusades like the Holy Inquisition, which began burning sodomites at the stake as a special occasion, as in the memorable auto-da-fé of San Lázaro in Mexico City.”

During Vasco Núñez de Balboa’s colonial expedition across Panama, he “saw men dressed like women; Balboa learnt that they were sodomites and threw the king and 40 others to be eaten by his dogs, a fine action of an honorable and Catholic Spaniard.”

The Spanish colonial authorities in Cuba castrated those they considered “sodomites” and forced them to eat their own testicles coated with dirt.

When the Spaniards invaded the Antilles and Louisiana, “they found men dressed as women who were respected by their societies. Thinking they were hermaphrodites, or homosexuals, they slew them.”

The colonial legislation that the Dutch merchants brought with them to the Cape of Africa in the 17th century formed the basis of [anti-LGBTQ] laws in Namibia, Zimbabwe and Lesotho.

The British imposed on the people of Ireland a 1634 law that made same-sex relations between males punishable by death. Later, the 1885 British Labouchère Amendment was the law under which feminine homosexual writer Oscar Wilde was sentenced to hard labor [in prison].

Historian Douglas Sanders explains: “Article 377 of the Indian Penal Code of 1860 made ‘carnal intercourse against the order of nature’ an offense.”

The British imposed this legislation in the Straits Settlements of Singapore, Penang and Melaka in 1872. By the late 19th century, Britain also enforced the law in Hong Kong, Fiji, the Malay Peninsula and Burma.

Korea Herald journalist Benjamin Jhoty quotes Utopia-asia.com, which offers information about the same-sexuality scene in Asia: “Asia has rich and unique homosexual traditions almost everywhere you look. The true enemy of homosexuality in places like Korea, Singapore, Indonesia, Malaysia and the Philippines are antique colonial laws and homophobic non-Asian religions that bully citizens with skewed views of the natural world.”

Sanders noted [in 2007], “This provision, or something very close to it, is presently in force in all former British colonies in Asia with the exception of Hong Kong.” He adds: “Sri Lanka, Seychelles and Papua New Guinea have the key wording from 377, but different article numbers. Parallel wording appears in the criminal laws of many of the former colonies in Africa.”

Historians Kevin Botha and Edwin Cameron write, “The systems of law the colonial powers (both Dutch and later English) introduced significantly influenced the customary law of the African communities they subjugated.”

The British “Queensland Penal Code” of 1899 was “adopted in Northern Nigeria in the 19th century, later becoming the basis for a uniform federal code in Nigeria in 1916. The Indian Penal Code had been used in Kenya, Uganda and Tanzania, but those laws were later replaced by drafts based on the Nigerian criminal code. Sudan used the Indian Penal Code. In 1960 Northern Nigeria enacted a separate criminal code, based on the Sudan code.”

The British also imposed anti-“sodomy” legislation on Canada in 1892, New Zealand a year later and Australia in 1788 and again in 1899.

Civil liberties historian Tom Head explained: “As Spanish, French, Dutch and English colonists began to settle North America during the 17th    century, they brought with them a catalog of highly specific laws proscribing various sexual acts. The purpose of all of these laws was to enforce monogamous, same-race, heterosexual marriage as a mandatory institution and to punish any and all sexual activity outside of that institution.”

The earliest anti-“sodomy” legislation was passed in the Virginia Colony on May 24, 1610, and soon spread to all the colonies and later to all of the states.

Historian John D’Emilio wrote: “In every colony, sodomy was a capital offense — at least five men were executed during this era — and other homosexual acts, from ‘sodomitical practices’ to lewdness between women, were punished with whippings and fines.

“After the American Revolution, although the states reformed their criminal codes in the spirit of Enlightenment philosophy, revision of the sodomy statutes and the ‘crimes against nature’ laws came very slowly; North Carolina did not eliminate capital punishment [for sodomy] until 1869. Thomas Jefferson proposed that death be replaced by castration. Moreover, as time went on, legislatures and courts broadened the statutes to include a wider range of acts, such as oral sex between men and sexual activity between women,” D’Emilio concluded.

In the U.S., anti-homosexual and anti-miscegenation laws were also weapons of state repression against African and Native peoples, who became internal colonies. In 1898 U.S. imperialists also brutally enforced these laws in countries they subjugated militarily.

After seizing Puerto Rico as a colony in 1898, the U.S. imposed a law against same-sex love on the island that was a carbon copy of the California state legal language. And in 1938, under U.S. domination, the Cuban Penal Code — the “Public Ostentation Law” — was enacted in that country.

Unsourced accounts can be found in Feinberg’s “Transgender Warriors” (Beacon, 1996), the first Marxist analysis of transgender life and history.