For antiwar, anti-racist and working-class activists, a May 23 webinar on the role of the U.S., NATO and Ukrainian neo-Nazis in provoking and prolonging the war in Ukraine provides an antidote to the poisonous propaganda in the U.S. corporate media. 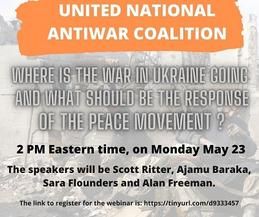 Those who missed the webinar live can catch it by visiting the home page of the United National Antiwar Coalition (UNAC) at unacpeace.org. Hundreds of people are viewing it daily, and millions could learn from it.

The webinar’s strength was that the speakers were not only knowledgeable, articulate and convincing, they covered the questions from diverse angles — exposing media lies, explaining military plans, presenting geopolitical strategies of Washington, the European Union, Russia and China. Its organizers were aware that even within the antiwar movement, there was confusion about the role of Russia as well as the other states involved, and the webinar clarified many of those issues.

Most important for the movement in the U.S. and Europe, the speakers underlined the need to counter and break the ruling-class monopoly on propaganda and mobilize popular resistance to the war, based also on its disproportionate costs to communities of color and the working class in general.

Facilitating the discussion was Joe Lombardo, coordinator of UNAC, a coalition that has opposed militarism, racism and the threat to the environment, with a focus on Palestine, Syria, Iraq and Afghanistan, from a consistent anti-imperialist perspective.

The ongoing war in Ukraine has cost tens of thousands dead — 14,000 in the eastern Donbass region from 2014 until the Russian intervention — and billions of dollars of damages in Ukraine. Disruptions in the supply chain, caused by the war and even more by sanctions, threaten to limit food exports from Russia and Ukraine to East Africa, raise the price of wheat and starve hundreds of thousands of people, mainly children.

With support from an almost unanimous U.S. ruling class and both the Republican and Democratic Parties, the Biden administration has committed $54 billion in aid, both military and economic, to Ukraine. Washington plans to fight this war to the last Ukrainian, and it may drag the rest of the world behind them.

The media in the United States has gone all-out to present this support for Ukraine as expressing the near unanimous feeling of people in this country — all-out for the people of Ukraine — and suppressing voices in opposition. Social media, like Twitter, Facebook and Google — also owned by big, profit-driven capitalists — has found ways to censor opposition with clever algorithms that don’t remove posts but make them hard to find.

All the more important is this webinar that, while not answering every question, smashes the obscene avalanche of pro-war propaganda and makes it clear that in the imperialist United States, the main enemy is the ruling class at home.

John Catalinotto contributed to this article.