But at one Starbucks store after another, LGBTQ+ workers are among those voting overwhelmingly for a union. They know that nice, “affirming” platitudes are no substitute for union wages and benefits, safe working conditions and a voice at work. LGBTQ+ workers are among those union organizers fired by Starbucks — which for trans workers means losing coverage for gender-affirming care, including surgery. 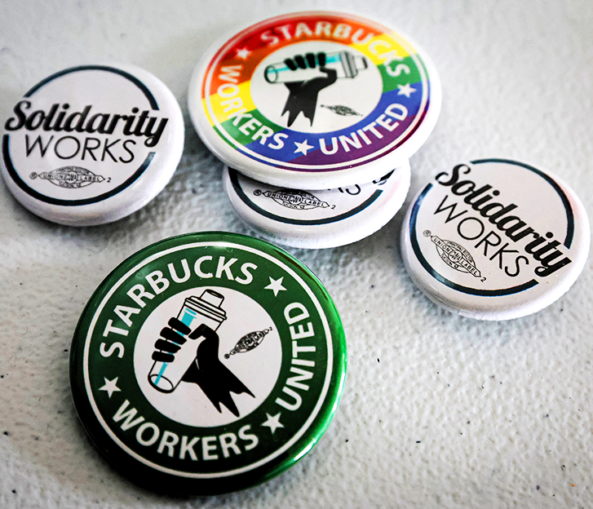 A trans worker in Ithaca, New York, was misgendered by her supervisor and threatened with loss of trans-affirming care if her store unionized.

Amazon is even more aggressive in portraying itself as LGBTQ-friendly — so much so that they proposed Seattle Pride rename itself “Seattle Pride Parade Presented by Amazon.” But the committee that has organized the annual march in Seattle since 1974 declined Amazon’s proposal, along with the $100,000 donation attached to it. Seattle Pride cited Amazon’s $450,000 in campaign contributions to anti-LGBTQ+ politicians in 2021.

The only way to really beat back bigotry is to take on the capitalist system, which uses racism, sexism, homophobia, transphobia and every kind of hatred imaginable — with tragic ramifications as exemplified by the massacre in Buffalo, New York, home of the first Starbucks union — to keep workers divided.

What workers at Starbucks, Amazon and scores of other capitalist corporations need is not a rainbow flag flying atop corporate headquarters. They need mass solidarity from the LGBTQ2S+ community — which is overwhelmingly working class.

Likewise it is in the best interest of the community to join with workers fighting for a union. Following the money makes it clear that we all have the same enemies. And a rising tide lifts all boats!

As Arjae, a bisexual non-binary Starbucks worker and union organizer in Buffalo said: “There can’t be any hope for LGBTQ2S+ liberation through capitalism. Queer and trans people face the same kind of discrimination and oppression in Starbucks as we do in every other company, despite Starbucks’ self-proclaimed allyship.” They concluded, “at the end of the day, Starbucks’ commitment to LGBTQ2S+ liberation begins and ends where a dollar can be made.”