Protesting corporate greed and destruction of the environment, a crew of activists from Vermont, Rhode Island, Maine, and western and southeastern Massachusetts gathered May 4 outside Boston Westin’s Seaport Hotel to demonstrate against A.D. Makepeace, a corporation based in Wareham, Massachusetts. 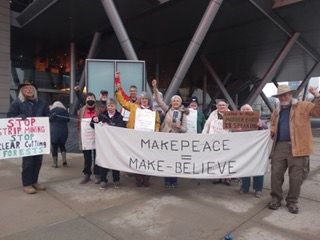 The action, organized by Save the Pine Barrens, was joined by members of Extinction Rebellion Boston; Mass Peace Action-Indigenous Subgroup, Community Land and Water Coalition; and Workers World Party.

At the hotel, Makepeace was receiving the “Private Company Board of the Year” award from the National Association of Corporate Directors. Makepeace produces voluminous public relations material that green-washes its rampant destruction, over decades, of hundreds of acres of mature forests, globally rare pine barrens and Wampanoag Indigenous cultural sites in southeastern Massachusetts, where the corporation’s mining, sand and gravel sales and real estate developments are located. Pine barrens — plant communities that occur on dry, acidic, infertile soils — are estimated to be 2.6 million years old.

These groups say that the Massachusetts Historical Commission is not protecting evidence of Indigenous settlements and activities from Makepeace’s wholesale destruction and disposal of uncounted artifacts, possibly including human remains. As early as 2012, investigations by the Public Archaeology Laboratory “recovered cultural materials” from several locations at a site in Plymouth.

Owning about 7,000 acres, accumulated since the company’s founding in the mid-1800s, Makepeace is the largest landowner in the southeastern region and one of the largest in the state. Jim Kane, formerly of MassDevelopment, is the corporation’s President and CEO. Well-connected politically and socially, Makepeace has used its profits to enter into financial transactions with municipal board members, creating conflicts of interest so that local boards look away from this plunder.

This confluence is a microcosm of the corruption driving the global climate emergency, with all its accompanying oppressions and distortions.

In 2016 the Massachusetts Division of Fisheries and Wildlife (MassWildlife) granted Makepeace a Conservation and Management Permit to “take” — that is, kill — 12 endangered, threatened or special concern species to build a 50-acre solar project on priority habitat in Wareham. Priority Habitat is based on the known geographical extent of habitat for all state-listed rare species.

Now Makepeace has applied to amend the permit to build another 70-acre solar project on abutting priority habitat. Some of the threatened species include Eastern Box Turtle, Barren’s Dagger Moth, Frosted Elfin, Pine Swallow Moth, Northern Tiger Beetle, which are included in the 220 species of plants and animals protected by the state’s Endangered Species Act.

The relevant southeastern region contains unique deposits of “silica” sand, a globally rare commodity, which is the second-most extracted substance in the world after water, according to an April 26 United Nations report. (U.N. Global Perspectives, news.un.org)

The sand is used in concrete, cement, glassmaking, roadbuilding, fracking, water filtration and manufacturing of such diverse commodities as toothpaste, elastic and others. Because its extraction is unregulated, it is being used up faster than it can be replaced by geological processes, at the rate of 50 billion tons per year. Because of its scarcity, sand is becoming increasingly profitable to extract and sell.

Makepeace uses “cranberry farming” as a cover for its mining operations, but earth removal is not necessary to grow cranberries, contrary to statements the company has made to state agencies and municipal land use boards to get approval for activities which have been ongoing for years. Makepeace actually gets subsidies and exemptions from environmental regulations for its “agricultural activities.”

Makepeace has created a subsidiary, Read Custom Soils, with several locations in southeastern Massachusetts, where extracted sand and gravel is conveyed to be sold. The Read Custom Soils website says it is “New England’s leading provider” of a number of soil types specialized for “green roof installations,” as well as “stabilized stone dust” used in “nature paths and pedestrian walkways and other specialized soils.”

The company obtains these materials seemingly without paying property taxes or extraction fees to the municipalities where their mines are located. The company gets agricultural exemptions, because the mines adjoin cranberry bogs. Municipal officials look the other way as hundreds of 18-wheeler open trucks pound over the narrow rural roads every day, carrying sand and gravel from the mines to Read Custom Soils and other locations.

In addition to these harms, mining silica sand means the dust-sized particles are released into the air and breathed in by humans, causing toxic health problems. Dust covers the vehicles, yards and homes of the nearby residents, making it impossible for them to have open windows and creating inevitable, but as yet undocumented, respiratory and other health problems.

With Borrego Solar, another corporation, again under cover of cranberry bog farming, Makepeace has combined its lucrative strip-mining business with the clear-cutting of over 350 acres for 13 large industrial solar projects. In at least one situation, 3,000 toxic copper-chromated-arsenic treated poles were installed in spring 2021. Still standing almost a year later, sunk 20-30 feet down, these poles endanger a single-source aquifer that serves seven area towns.

Big corporations make lots of profit building ground-mounted solar systems, instead of on rooftops or already cleared land like power-line and highway easements. Massachusetts energy subsidies are given to such corporations. The ground-mounted panels consume acres of land, forest and farmlands. Over 4,000 acres of forests in Massachusetts have been eaten up by solar panels, and another 100,000 acres are targeted. (savethepinebarrens.org, May 2)

Clearing trees and vegetation creates increased stormwater runoff, damaging wetlands and polluting water. Companies like Makepeace get permits to fill in the wetlands and alter the riverfronts.

Batteries used to store solar electricity can leak toxic materials onto the ground, polluting groundwater, rivers and wetlands. Storage of these and other types of batteries is another problematic issue municipalities are facing. Concentrations of these batteries are documented to spontaneously explode and ignite.

When Makepeace and Borrego decide there are no more profits to be made from solar panels, what will happen to them and the batteries? How will this hazardous waste be disposed of? The towns of Carver and Wareham are the site of hundreds, if not thousands, of solar panels.

Solidarity for people and the environment

In those towns a dozen residential wells have been ruined, angering homeowners in this rural, working-class community and activating some of them to unite with Indigenous and white residents and environmental activists. They have formed a coalition, made up of Save the Pine Barrens, Environment Watch of Southeastern Massachusetts and Land & Water Protectors Plymouth & Beyond, to try to stand against this mammoth company with the misleading name, Makepeace.

The coalition has taken action on multiple fronts, appealing to state agencies to do their jobs to oversee and enforce local and state land-use laws and regulations. The coalition has appealed the nonactions of town boards to the state’s Attorney General, as well as bringing lawsuits in state courts. Protests have become more frequent.

There are some rays of hope-giving light. In early May 2022, two coalition members were elected to the local governing boards of selectmen for two of the affected towns, including Melissa Ferretti, president and chairperson of the Herring Pond Wampanoag Tribe.

Increasing numbers of affected residents are helping to build the capacity of the coalition. Communities in the western part of the state, as well in Maine and New Hampshire, are facing similar projects proposed by corporations from New York and other distant areas. They are coming together in weekly zoom calls to share stories, strategies and tactics and to show up for each other in the fight to educate and mobilize the public and demand that the powers-that-be stop these nefarious activities.

These volunteer groups are mobilizing to take on the voracious corporations in scenarios all too familiar, replicating struggles in geographic areas all over the world.

The need to connect the dots — to recognize the deep roots of the white-supremacist culture that permeates the late-stage heteropatriarchy of global capitalism afflicting us all — has never been greater.

Connecting the dots will only be effective if it motivates us to find common ground and rise up together to protect and safeguard the land for our children and their children. Water is Life.

K. James contributed to this article. Linden Jenkins is a member of Save the Pine Barrens and Boston Extinction Rebellion.