The following remarks were given by International Action Center activist Richie Merino at the Al Quds demonstration in New York City, April 29. 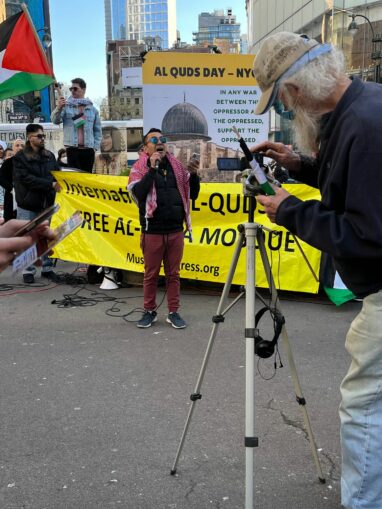 Revolutionary greetings. I’m a proud Chicano from the South Bronx, and our community stands in strong solidarity with, and looks up to, the Palestinian resistance for inspiration. The Palestinian struggle against the Zionist settler-colonial project known as Israel is inextricably linked with the struggle waged in the South Bronx against gentrification and police violence.

U.S. politicians, especially Democrats, have granted local police departments the power to obtain U.S. military weapons, defense gear and surveillance technology through the Department of Defense’s 1033 program, which has transferred billions of dollars in weapons to the NYPD and other police departments since its inception in the 1990s.

Israel is one of the U.S.’ largest weapons importers, having purchased tens of billions of dollars in military equipment since 1950.

We know what the racist state of Israel does with U.S.-made weaponry. These weapons are used to surveil revolutionary activists from occupied Palestine to the South Bronx and crush any dissent against western imperialism. They are used to attack innocent worshippers at Al-Aqsa mosque, including mothers and children; and they target, kill or imprison Palestinians resisting Zionist settler colonialism.

The NYPD trains with and exchanges tactics in violence and oppression with Israel. Who knew that the NYPD has a satellite office in Tel Aviv?

Racial profiling and “crowd control” tactics utilized by the NYPD against people of the South Bronx are learned from IDF suppression tactics in occupied Palestine.

Understanding that both the U.S. and Israel are white-supremacist, settler-colonial projects, whose founding were predicated on genocide and stealing land, explains why both rely on exploitation, violence, subjugation and mass incarceration to keep their project going. Gaza is the world’s largest open-air prison.

The European settlers we learned about in our history classes are not a stain of the past — they still exist today, carrying out the same white-supremacist colonial project of the 1800s, when European settlers weaponized religion to commit genocide against Indigenous peoples as they colonized the Americas.

For the survival of collective humanity and the planet, we cannot allow uncontested power to remain in the hands of colonizers.

The South Bronx stands in solidarity with the Palestinian resistance, because our common enemies are capitalism, imperialism and white supremacy. Our loyalty should always be with oppressed peoples struggling against the U.S. empire and their puppet states like Israel.

Strength and victory to the resistance! Palestine will be free from the river to the sea!