Texas’ highest court stayed the April 27 execution of Melissa Lucio, the only Mexicana on death row here. There was a collective sigh of relief, many tears of joy and a burden lifted from the shoulders of Lucio, her family, her attorneys and the throngs of her supporters, not only in Texas but around the world. 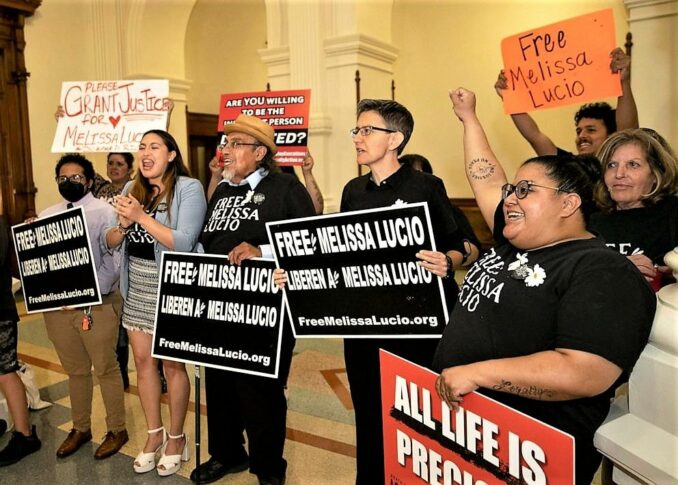 Supporters of Melissa Lucio, celebrating outside Texas Gov. Greg Abbott’s house, after news of the judicial stay of her execution.

Lucio was convicted of murdering her two-year-old daughter, Mariah, in 2007. After an abrasive and hostile interrogation by a Texas Ranger, right after she found out her daughter had died, Lucio, pregnant with twins, was tried for capital murder and sent to death row.

Lucio was a victim of sexual and psychological abuse beginning at age six and continuing as a child bride by her first husband and later by her second partner.

On April 25, with two days before she was scheduled to be lynched in the death house in Huntsville, Texas, the Texas Court of Criminal Appeals issued a stay and ordered Lucio’s trial court to review four of the nine issues raised in a writ of habeas corpus.

First, if the State hadn’t used false testimony, the jury likely would not have convicted; second, previously unavailable scientific evidence would preclude her conviction; third, she is actually innocent; and fourth, the State suppressed favorable material evidence in violation of the Supreme Court ruling in Brady v. Maryland.

Lucio’s oldest son, John and his spouse Michelle campaigned daily for months for this stay. They were joined by many of Lucio’s siblings and children both in the Rio Grande Valley on the Texas-Mexico border and around the state.

“I don’t think there’s any way to predict” whether Lucio gets a new trial based on these four claims, said Robert Dunham, executive director of the Death Penalty Information Center, a nonprofit that takes no position on the death penalty but is critical of the way it is administered.

But “the stay of execution and the remand for consideration of these claims is extraordinarily significant,” Dunham added, describing the ruling this week as “an open door, a threshold that had to be crossed for Melissa Lucio to have her day in court.” (cnn.com, May 1)

Never, ever, have two-thirds of the Texas Senate and over half of the Texas House of Representatives been in support of a stay of execution for any of the 574 people executed in Texas since executions resumed in 1982. The Senate is especially notorious for being a conservative “good ‘ol boys” club, known for being pro-life for unborn fetuses but not for living people.

Tivon Schardl, Capital Habeas Unit chief of the Federal Defender for the Western District of Texas and one of Lucio’s attorneys, stated, “We know that Melissa’s children — Mariah’s brothers and sisters — and Mariah’s grandparents, aunts and uncles are all relieved and grateful that Melissa’s life will not be taken by the State of Texas. And we believe the court honored Mariah’s memory, because Melissa is innocent. Melissa is entitled to a new, fair trial.

“We are profoundly grateful to the hundreds of thousands of Texans and people around the U.S. and the world who advocated for Melissa, including Representatives Jeff Leach and Joe Moody, Sen. Eddie Lucio and more than 100 Texas legislators; 225 anti-domestic violence/sexual assault organizations, including the Texas Council on Family Violence, the Texas Association Against Sexual Assault, Friendship of Women and the Lone Star Justice Alliance; over 130 faith leaders, including Pastor Jesse Rincones of the Hispanic Baptist Convention of Texas; and more than 30 groups that work on behalf of Latinos, including the National Hispanic Caucus of State Legislators.”

Professor Sandra Babcock, director of the Cornell Center on the Death Penalty Worldwide and another one of Lucio’s attorneys, stated, “Melissa’s life matters. The court’s decision paves the way for Melissa to present evidence of her innocence that should have been heard by the jury that condemned her to death 14 years ago. As a survivor of childhood sexual abuse and intimate partner violence, and now locked away for these past 15 years, Melissa’s voice and experiences have never been valued.

“The court’s decision signals its willingness to finally hear Melissa’s side of the story. If the district court hears all the evidence of Melissa’s innocence and the gender bias that infected the police investigation and prosecution, we are confident she will return home to her family.”

Lucio stated, “I thank God for my life. . . . I am grateful the court has given me the chance to live and prove my innocence. Mariah is in my heart today and always. I am grateful to have more days to be a mother to my children and a grandmother to my grandchildren.” (Innocenceproject.org, April 25)

In a startling and unexpected development this week, Texas State Representative Jeff Leach, a Republican who helped lead the fight to stop Lucio’s execution, said that he would support a moratorium on executions in Texas and that other conservatives in the legislature are with him.

Activists finally are seeing a bit of light at the end of this racist tunnel called capital punishment. One activist told Workers World, “We now have an opportunity to actually get some relief from the legislature and should begin planning now for the opening session in January of 2023. Our activism must push like never before, both in the legislature and in the court of public opinion.”