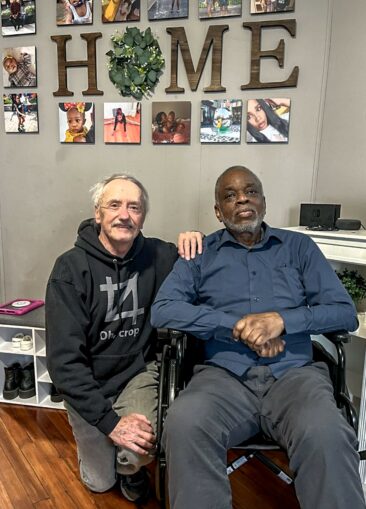 Bradford Gamble is out of prison after serving 46 years and is now living with his nephew, Shaquan J. Jordan, in West Philadelphia. He is terminally ill with metastatic colon cancer that has spread to his liver. Gamble is one of only 33 people in the last 13 years who have successfully petitioned the Pennsylvania Department of Corrections to release him because of illness.

Gamble was arrested in 1976, when he was 19 years old, and sentenced to spend the rest of his life in prison, with no chance of parole. He says he deeply regrets his past actions, which caused the death of another person, and thinks about this every day. He is far from the rash teenager he was 46 years ago.

The 66-year-old Gamble won his release because of the help of Bryant Arroyo, another incarcerated person, who informed him of a little-known state law that allows terminally ill people to be let out of prison — but only if they have less than a year to live. For those sentenced to a life term, it’s one of the only ways they can get out of prison.

Rather than get treatment to prolong his life and stay in prison, Gamble decided to refuse medical treatment so he could die at home instead of behind bars. He has six months to a year left to live. If his health improves, the DOC or a state prosecutor could send him back to prison.

“The statute is drafted so narrowly that it forces you to make decisions like forgoing lifesaving treatment in order to get even the possibility of medical transfer,” said Rupalee Rashatwar, an attorney with the Abolitionist Law Project, a public interest law firm that represented Gamble in his transfer petition. Rashatwar is working to help more seriously ill people get out of prison before they die.

Abolitionist activists are trying to get laws passed that would put an end to life sentences without the possibility of parole. In Pennsylvania, 13.4% of people in prison are sentenced to life terms without parole, compared to a 3.6% average in other states.

This and other sobering statistics compiled in a Families for Justice Reform report are driven by two state laws: the mandatory minimum sentence of life imprisonment required for first- and second-degree murder charges; and the denial of parole eligibility to anyone with a life sentence. (tinyurl.com/yckrwxym)

By 2019, because of these and other severe sentencing policies, Pennsylvania courts had imprisoned more than seven times the number of people they incarcerated in 1970.

These laws are racist. While Black residents compose 11% of Pennsylvania’s population, an astounding 65% of those sentenced to life terms are Black. As a result of decades of these draconian white-supremacist sentencing policies, the prison population of those 50 years of age or older increased from 351 people in 1979 to 10,706 in 2019. This is a 30-fold increase!

There is no rational reason to imprison people for so many decades, especially after they reach the age of 50. The fact is that only 1% of those released at age 55 or older are reincarcerated within three years. Among people previously convicted of murder, the reimprisonment rate fell to as low as 0.4%.

Not only are activists and relatives of incarcerated people campaigning to end life sentences without parole, but there is an effort to persuade state legislators to pass a compassionate release policy for elderly and ill people.

Rally to abolish death by incarceration!

The Coalition to Abolish Death by Incarceration is one of many Pennsylvania organizations demanding that legislators support bills that would allow “our loved ones” the opportunity to come home from prison. The organization is mobilizing for a mass statewide “Second chances keep our communities safe” rally in front of the state capitol in Harrisburg, on May 25. (fb.me/e/35tLtHD98)

Thousands of people remain in Pennsylvania’s prisons even if they are ill, were imprisoned decades earlier and are no longer considered a threat to the public. It’s a burden on people in prison and their families. And it costs the state $2.3 billion a year to feed, house and provide medical care for incarcerated people.

Gamble told his supporters a few days after his release, “I didn’t make it out here just to say, oh, I’m home. Family, friends, it’s lovely. It’s beautiful. But I got more to do.” Wanting to inform health care workers about medical abuse in the prisons, he stressed: “I’m a human being. And I deserve to be treated as a human being. I want you all to know that there are things going on behind closed doors.

A month later, Gamble participated in a panel via Zoom on April 20 alongside Celeste Trusty, Secretary of the Pennsylvania Board of Pardons, and State Senator Sharif Street. He joined panel members in urging legislators to pass SB835, which would replace the current restrictive compassionate release law and establish more flexible parole opportunities based on age or illness.