By a vote of 209-59 in favor, the resident physicians at the University of Vermont Medical Center have become the newest members of the Committee of Interns and Residents (CIR). The National Labor Relations Board held the union election at UVM, after the hospital declined to recognize the union despite over two-thirds of the resident staff signing union membership cards. (Seven Days, April 14) 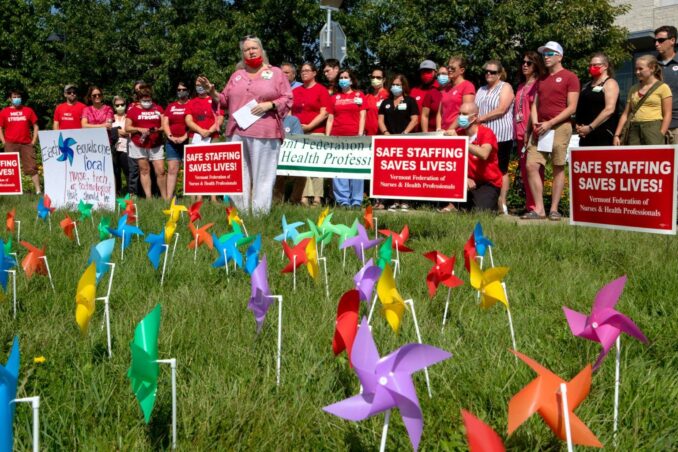 CIR is a local of the Service Employees Union (SEIU) and has over 20,000 members across the U.S. Resident physicians are the backbone of medical staff at university hospitals. They work long hours, especially in the evening and overnight “off” hours, when attending physicians are not available. Even with changes to residency work hours set in 2003, many resident doctors still work 80 hours a week, and sometimes they work for 30 hours straight. (cirseiu.org)

Resident union members share a common concern with nurses’ unions. How can they properly and safely care for sick people if they are overworked and stressed from the incredible toll the pandemic has taken? Resident physicians are essential members of the working class, and it is right that they seek collective bargaining rights to push back against hospitals that continue to value profits above their workers.

Graduate Students at Fordham University in New York City voted by a landslide to join the Communications Workers of America (CWA). The NLRB tally was 229 in favor of unionizing and only 15 opposed. The graduate students are fighting for a pay increase, better health care benefits and child care. They need a formal grievance process, since they are often exploited by universities who consider them a cheap labor pool.

The push to form a union gained momentum during the pandemic when graduate students bore the task of setting up online learning for students. Carolyn Cargile, a Senior Teaching Fellow and Ph.D. candidate in Fordham’s English Department, credited the Amazon and Starbucks union drives as inspiration. She said, “Especially seeing the victory at Amazon — which has such a history of union busting and anti-union campaign — and seeing the union win, it emphasized that these really powerful corporations are not immune to the work of organizing.” (The Bronx Free Press, April 14)

Worker power and union clout were forces that the Realty Advisory Board in New York City had to reckon with in order to avert a strike of essential building workers, who are members of Local 32BJ of the Service Employees Union (SEIU). The contract for the “32,000 doorpersons, superintendents, resident managers, handypersons, concierges and porters” was due to expire, and a strike was set for April 21. The last 32BJ residential building workers’ strike was over 30 years ago and lasted 12 days.

The contract still needs to be ratified by the rank and file, but negotiations have guaranteed a 12.6% wage increase, $3,000 bonus, 100% employer-paid health insurance with no premium-sharing for union members and protected paid sick leave and vacation days.

Union President Kyle Bragg said: “We got a deal done that our members have earned and deserved. This contract honors the indispensable contributions that 32BJ members made throughout the pandemic and includes pay bonuses — a powerful recognition of our members’ sacrifice.” (Eyewitness News ABC, April 20)