On April 3, a plaza, a monument, a huge portrait, and a walking trail were all unveiled and dedicated to remembering a man brutally murdered by Houston police almost 45 years ago. The family was surrounded by hundreds of supporters and friends as well as too many politicians and police officers. The event was sponsored by Houston Mayor Sylvester Turner and Houston Police Chief Troy Finner. 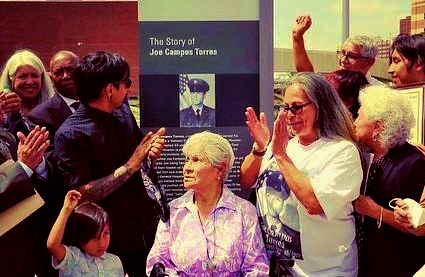 Margaret Torres, mother of Joe Campos Torres, surrounded by family when a plaza was renamed for her son, murdered by Houston police. Houston, April 3.

What was the reason for the occasion?

A 22-year-old Vietnam vet got into a scuffle at a Houston cantina in 1977 while he and others were celebrating Cinco de Mayo, a Mexican holiday. Houston police came and arrested a young Chicano, Joe Campos Torres, for disorderly conduct. The racist cops took Torres to “the hole” and beat him so severely that when they finally took him to jail, the sergeant refused to admit him and had the cops take him to the hospital.

Instead, the six white police officers took him back to the downtown hole, a platform hidden below street level on the south bank of Buffalo Bayou. Torres was beaten again, and the last words he ever heard, if he was in fact conscious, were from police officer Terry Denson: “Let’s see if the w–k can swim.”

His body was thrown 20 feet down into the swirling bayou and found a few days later on Mother’s Day. His mother told this reporter in 1977 that she would never celebrate Mother’s Day again.

One of the six cops involved was a rookie who actually reported what had happened. Otherwise, Torres would have just been an unknown body floating in the bayou. Two cops were tried in state court. Denson and Stephen Orlando were convicted of negligent homicide and sentenced to one year probation and a one dollar fine. In other words, a mere slap on the wrist!

These two cops plus a third, Joseph Janish, were convicted in federal court of violating Torres’ civil rights but received only one year and one day in prison for this brutal, racist murder.

There were protests, marches, rallies, press conferences but never justice.

However, there was no one in Houston at that time who had not heard of Joe Campos Torres and what the Houston police had done. The vicious brutality was never forgotten.  Torres’ younger sister Janie, who was ten years old at the time of the murder, grew up and decided to keep her big brother’s name alive and to continue demanding justice.

Her mother, Margaret Torres, after several years of protesting and speaking out, just could not deal with the pain any longer and retreated into her home. However, she was at this dedication and, while walking with a walker now, held her head up while tributes were made to her son.

‘I am Joe Campos Torres’

Year after year, on the anniversary of Torres’ disappearance, there has been a community march from the bar where he was arrested to the hole where he was brutalized and thrown into the bayou to the area downstream where the body was found. This walk for justice has attracted activists of all ages, including some who were not even born when this murder took place and others who had been active protesting the murder in the 1970s.

At the dedication Janie Torres, her son Richard Molina and another nephew, Johnny Torres, all felt this day gave a bit of closure. These activists have carried the weight of their family and fought like hell for some semblance of justice for their brother and uncle for so many years. When the whole crowd chanted, “I am Joe Campos Torres,” many were in tears or had goosebumps, but all had their fists in the air.

After the politicians finished speaking, the Torres family got to say a few words. Janie said that what the system fears is: “Our unity. Our power. Our determination.” Her son, Richard, spoke with just four words, “Viva Joe Campos Torres.”

The event culminated with two-time Grammy winner, Chicano musician and icon Little Joe y La Familia. As Little Joe spoke, he broke down in tears. Barely able to speak, he said in his biography he cited the names of 22 Chicanos who were the victims of police murder. “I have been marching and protesting over the deaths of many Chicanos at the hands of the police. This case of Joe Campos Torres just stayed with me, in my heart. Unfortunately, this chingadera continues. To be here with the familia Torres, I share their pain in my heart. I am honored to be here.”

Janie had been arrested, kettled by Houston cops, after a protest against the 2020 murder of Houstonian George Floyd in Minneapolis. She spent three days in a horribly overcrowded jail during the pandemic before she was finally allowed to be bailed out. Eventually, charges were dropped.

Both Janie and Richard said that this is just the beginning, that through unity the struggle will continue. The fight against racist and brutal cops will continue until these injustices no longer exist.