Starbucks workers in Buffalo, New York, called a boycott April 2 to protest the unjust firing of Angel Krempa and Nate Tarnowski. Both workers were well known union supporters, terminated for bogus violations. Starbucks workers and community members held a picket at the store the workers were fired from and distributed fliers explaining the situation to customers. 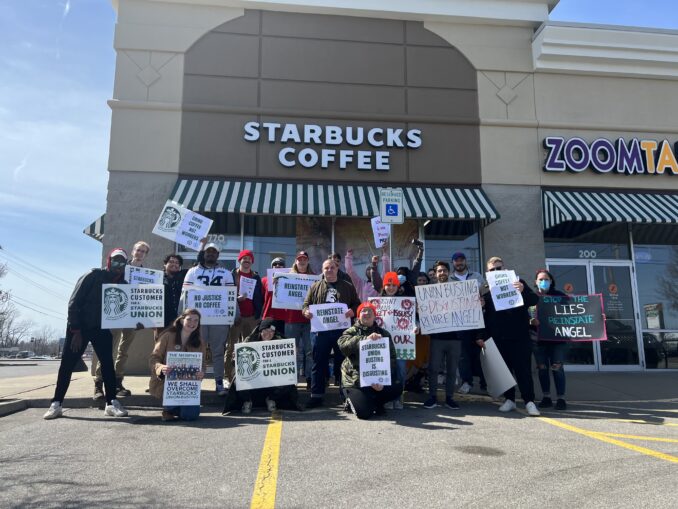 Workers and community allies picket in front of the Buffalo Starbucks where the recent firings occurred.

The union statement describes the circumstances of Angel’s firing as follows: “Starbucks claims they fired Angel because of two days where she was late to the store, but Starbucks policy only requires that Angel call the store ahead of time to notify her team she would be late, which she did. She has the call logs and the files to prove it. The real reason Starbucks fired Angel is the same reason she has been targeted for months, because she is a union leader who is unafraid to stand up to the company.”

Situations like this are becoming more common in stores across the country, like in Memphis, Tennessee, where Starbucks fired an entire organizing committee led by Black and Brown workers, many of them women.

Other workers in Buffalo were unjustly fired in previous weeks such as Cassie Fleischer and Danny Rojas. Starbucks is waging a war against its workers that extends far beyond simply union busting. Workers have faced vicious intimidation, threats and relentless harassment. This is on top of having transfer requests denied, hours slashed, and other examples of economic retaliation.

One Starbucks worker this writer spoke to, Colin Cochran, who works at the

Walden Andersen store, said, “They closed my store for two months in the middle of our union campaign, but we won anyway. We are gonna keep winning across the country.  We’re not gonna be afraid of Starbucks’ despicable union busting tactics. It’s personally-targeted disgusting behavior from Starbucks corporate and we’re gonna make them pay for it!”

About halfway through the picket, police were called on the workers, allowing them the opportunity to fill their historic role as strikebreakers. Starbucks management claimed they did not call them and it was instead the property owner who called, but Starbucks also falsely claims it does not bust unions  either. Whether they were called by the boss or landlord, the police eventually left without incident and the picket continued strong.

This picket in Buffalo follows three strikes at other Starbucks locations in Kansas City, Missouri; Denver, Colorado and Olympia, Washington, also protesting union busting and retaliation against workers. Among the growing resistance from workers are also some major victories. The day before on April 1, the Starbucks roastery in New York City became the newest store to officially unionize. The roasteries are massive compared to cafes.  The New York City eatery has approximately 100 workers — a major win for the union, and a huge blow to Starbucks CEO Howard Schultz’s swollen ego.

One worker at the roastery, Ashley Carrigan, said in a public Facebook post, “While we are paid almost bare minimum, our CEO [Kevin Johnson] was given a $60 million ‘golden goodbye’. We deserve more.”

This is a sentiment shared by many Starbucks workers, who do not fail to see the hypocrisy in the company’s “we’re all partners” attitude. When some “partners” make off with millions of dollars, others struggle to pay their rent and medical bills.

On the same day as the NYC roastery victory, there was an enormous union victory of Amazon workers on Staten Island, New York. This is a major development for the whole working class and signals a reemergence of a militant organized labor movement that has been long overdue in this country.

Despite having two almost opposite strategies in organizing, workers in Starbucks Workers United and Amazon Labor Union have one thing in common — the fact that their campaigns are both entirely worker-led.

Starbucks Workers United is affiliated with the union Workers United, under the parent-union SEIU; however, the role of union staff is minimal and serves to support worker leadership. Organizing committees made up of rank-and-file workers are responsible for developing strategy, bargaining with the company, and everything in between.

ALU built its infrastructure from the ground up, not affiliated to any other larger entities. This makes the victory against Amazon all the more impressive. Chris Smalls, president of the ALU, said in a now infamous quote, “We would like to thank Jeff Bezos for going to space because while we were here, we were signing people up.”

As the class struggle intensifies, workers across industries are showing that we aren’t going down without a fight.