The growing movement for union rights received a shot in the arm with the inspiring winning election of the Staten Island, New York, Amazon warehouse workers, in a decisive victory against the vehemently anti-union Amazon April 1. 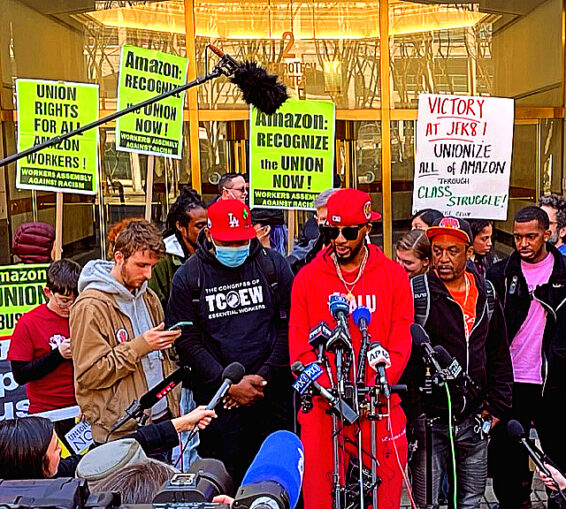 The significance of this victory, in which solidarity from socialists played a big role, cannot be overstated. It comes at a time of working class upsurge, as members of every sector of the workforce – from Starbucks to REI Co–op to grad student workers – are not only waking up and fighting back, but winning, too.

This awakening of struggle is particularly needed now, with Congress funding the war against Russia in Ukraine, scrapping COVID relief, abandoning eviction protection, and forgetting about promises made to the working class in Build Back Better.

Christian Smalls launched the Staten Island warehouse organizing drive a year ago, after being fired by Amazon in 2020 for leading a righteous and necessary walkout protesting the lack of COVID protection – an Amazon failing that persists to this day.

Since then, he and Amazon Labor Union activists have organized card-signing, barbecues, job actions, walkouts, protests, street meetings, and rallies at Jeff Bezos’ Manhattan penthouse. They won back jobs for fired workers. When an Amazon worker was being sexually harassed outside one Staten Island warehouse, Smalls and other ALU leaders stood outside the building with a bullhorn, and forced management to take action against the offender.

That ALU was able to win on-the-job victories even before the successful National Labor Relations Board vote means that a union already existed – well before receiving legal recognition by the capitalist state. This has significance for the workers movement, since other Amazon workers have been organizing for workers’ rights without union contracts. Most notably, two weeks ago warehouse workers in Maryland and New York’s borough of Queens – in actions organized by Amazonians United – walked off the job in coordinated actions demanding a $3 hourly raise.

It’s worth noting how much Amazon’s Staten Island warehouse workers – mostly African American and Latinx, with a substantial international workforce as well, from Southeast Asia, Africa, and Latinx America – had to overcome to win the union vote.

First of all, there was the overall pro-management bias of NLRB-supervised union elections. The laws allow bosses to engage in a ton of intimidation and coercion during union elections, with little-to-no repercussions or penalties. Any fines against management are so negligible that union-busting firms advise companies to think of them as “hunting licenses.”

Second, the workers were up against one of the planet’s largest and richest companies. Amazon is so huge, it bypassed a huge chunk of the supply-chain chaos by making its own containers and chartering ships and long-haul planes.

A company with that kind of resources can spend more than the average company to shut down union drives. In 2021, Amazon spent $4.3 million on union-busting law firms. Obviously, that amount went up in 2022.

A recent New York Times article detailed how Amazon kicked into high gear in the early stages of the pandemic – not to make the workplace safer, but to counter Smalls’ walkout  protesting  the lack of COVID safety. The company “formed a reaction team involving ten departments, including its Global Intelligence Program, a security group staffed by many military veterans.” (April 2)

The bosses subjected their workers to captive audience meetings, texts, firings, intimidating one-on-one meetings and flat-screen TVs that were stationed throughout the warehouse and ran constant anti-union videos. Meanwhile, union organizers were arrested more than once on trumped-up charges.

Third, Amazon’s punishing work pace and inhumane business model results in what would be a killer for many union campaigns: an annual workplace turnover rate of 150%. The Staten Island warehouse in particular has an injury rate three times the national average. Many workers who had signed cards either were fired, went on disability due to injury, or quit just to protect their health.

And finally, Staten Island was typical of many Amazon locations: in hard-to-reach, out-of-the-way places that make it difficult to hold protests and solidarity actions in support of the workers. Most Manhattan, Brooklyn or Bronx residents who don’t have cars have to take a ferry to Staten Island – then a bus trip to reach the Amazon warehouse.

That all these barriers were overcome is a testament to the rank-and-file, worker-to-worker organizing carried out by the ALU leadership. The twenty core leaders read labor history on the basics of deep organizing, and patiently won over their co–workers. ALU leader Derrick Palmer described how he even came into work to organize on his days off.

It’s also a testament to rising class consciousness in the working class as a whole, a phenomenon rooted in workers’ experience of the pandemic, coinciding with tens of millions of people in the streets fighting racist police violence. The inspiring street movement had a radicalizing effect, while frontline workers – pushed to endanger their lives for the sake of profits – were compelled to fight back.

Workers overcame the bosses’ divide-and-conquer use of racism, a feature in this struggle since the walkout Smalls led in March 2020. Amazon managers were caught plotting to discredit any organizing efforts with racist smear tactics directed at Smalls. This continued throughout, with the most recent example being the February arrest of Smalls for delivering food to workers during their break. During that incident, the New York Police Department arrested two other ALU workers – one white, one Latinx – but only Smalls was frisked for possible weapons.

Another part of the victory was solidarity, mostly from socialists who prioritized the Amazon union fight as a do-or-die struggle. Critical to the campaign’s success, some very effectively “salted” in Staten Island. Others, including Support Amazon Workers Network (SAWN) and Workers Assembly Against Racism (WAAR), built solidarity actions that raised the profile of the struggle and pressured organized labor to support it.

Even before the Staten Island campaign launched, activists with SAWN held a series of national demonstrations in early 2021 supporting the Retail, Wholesale and Department Store Union’s first attempt to unionize Amazon in Bessemer, Alabama.

This included protests at one of Amazon’s union-busting law firms Morgan Lewis in Philadelphia and other cities. New York City was the site of protests in Union Square, Harlem and Brooklyn. The point was to build classwide solidarity – to convince the average worker why it was in their interest to support unionization at Amazon.

Activists with WAAR were there when Smalls launched the Staten Island warehouse union campaign March 31, 2021. Over the next year they continued to prioritize the Amazon union fight in assemblies attended by activists involved in multiple New York struggles.

WAAR activists made frequent trips to Staten Island to the ALU tent stationed across from the Staten Island warehouse, signing up workers on cards and putting up pro-union artwork on the chainlink fence. WAAR leaders also purposely organized protests centrally in Manhattan, to break the struggle out of its physical and political isolation.

Between May 2021 and February 2022, WAAR brought together students, migrant workers, Black Lives Matter activists, housing activists and trade unionists in a series of street actions that rarely featured less than ten ALU members as the main speakers. 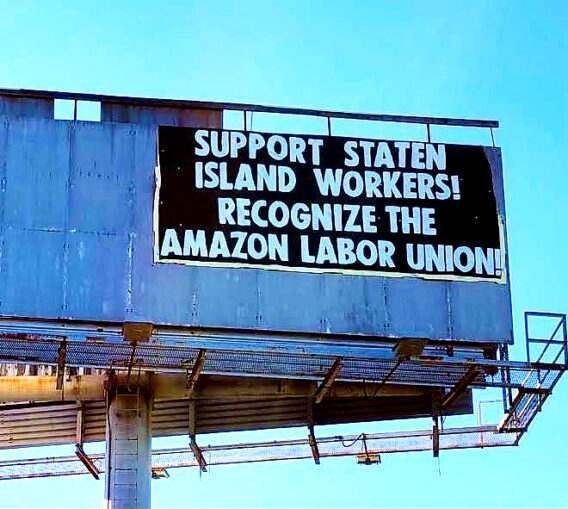 When ALU first filed for a union election in November, WAAR held a picketline outside the NLRB. They organized banner drops, and visibility campaigns that plastered subways with stickers demanding that Amazon recognize the ALU. WAAR put out a series of bilingual zines promoting the Staten Island campaign. Zines with pro-worker, pro-union cartoons were passed out to workers in the warehouse, and featured QR codes to the online union card site. 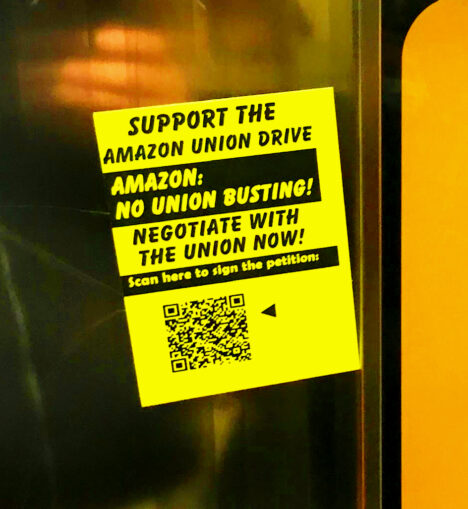 In the union election home stretch, socialists, anarchists, workers rights activists, and union members made thousands of calls to Amazon workers, urging them to vote yes for the union. This was organized virtually, with people making calls from home, and from the offices of UNITE HERE Local 100, and WAAR.

Solidarity was crucial in the Amazon union victory, making sure the brave ALU activists weren’t fighting on their own.

This year’s May Day rally in New York – set for 1:00 p.m. at Union Square – will add a main demand to the international socialist and workers’ holiday:  Stop union-busting! Along with the union victories at Amazon and Starbucks, the union-busting will continue. Already, workers at Starbucks stores were fired, their hours and benefits cut.

The Amazon Labor Union victory has given a powerful boost to the workers’ movement. Building solidarity and increasing collaboration among struggles will be critical for defending the gains of that movement.