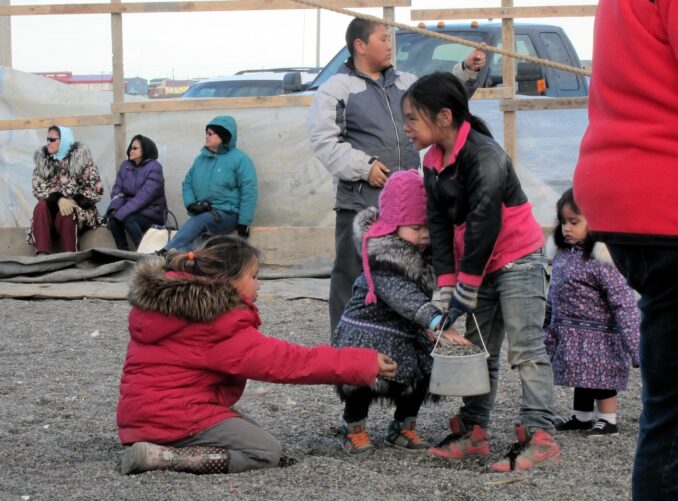 July 4th celebration in Utqiagvik, the northernmost community in Alaska.

The climate crisis is real. Millions of people throughout the world are suffering and dying from floods and rising sea levels, droughts, stronger hurricanes and more intense tornadoes — several out of their normal season. Wind and ice storms, blizzards, heat waves, cold snaps, wildfires and mudslides are more frequent. Melting or structurally disintegrating “rotten ice” threatens the livelihood of Arctic people who rely on ice to hunt.

While many of these weather events occurred before global warming became established, their intensity and frequency are certainly due in great part to the atmospheric heat generated by capitalist production’s reliance on fossil fuels.

On March 25, the youth organization Fridays for the Future held 778 demonstrations and protests worldwide to “strike for climate reparations and justice.” Their website asserts “The catastrophic climate scenario that we are living in is the result of centuries of exploitation and oppression through colonialism, extractivism and capitalism.” (fridaysforfuture.org/march25/)

Heat wave in the Antarctic

The heat wave on the Antarctic eastern coast saw temperatures rise by 70 degrees the second week of March, which led scientists on-site to take a picture of themselves in shorts and T-shirts. They were flabbergasted by this rise, since the Antarctic was entering its fall season. In the 100 or so years of meteorological observation in Antarctica, this was the first heat wave.

According to the Washington Post, “Satellite imagery and computer models indicate significant snow, rain and melting also occurred. During the heatwave, the ice sheet experienced its fourth-wettest day in more than four decades.” (March 22)

Along with this heat wave, the 1,200-square-kilometer Conger Ice Shelf, slightly larger in area than New York City, collapsed completely. It had been tottering before, but the heat wave was the last straw. These ice shelves surrounding the Antarctic continent keep the thick glaciers covering its land from melting more rapidly.

According to the AP, if all the glaciers in Antarctica melted, the seas would rise by 160 feet. (Yahoo News, March 25)

The Arctic experienced a heat wave at the same time as the Antarctic, which is surprising since it is in a different hemisphere and since its winter lasts until late April.

The Arctic is home to a number of Indigenous nations who depend on ice for transportation between communities, which are not linked by roads, and for hunting and fishing which supply much of their food.

There are at least 60 words in Inuktitut, the Inuit language, to precisely identify ice in its various stages.

Andrew Arreak is an Inuit scientist with SmartICE, a community-based enterprise that offers tools to adapt to climate change, integrating Inuit knowledge of sea ice with monitoring technology. It has branches in 32 communities in the Canadian North.

Arreak lives in Pond Inlet on Baffin Island in Nunavut. His community has had to confront the way ice responds to the ice breakers used by the iron ore mines on the island. He told Bloomberg News, “Sea ice is coming a little later, and melting a little earlier, each year.” He went on “It’s not just the thickness of the ice, it’s also what type of ice it is, whether it’s imported ice or newly formed ice.” (March 23)

The Arctic is warming much more rapidly than the rest of the planet, except perhaps Antarctica. The Inuit, whose ancestors moved into the area thousands of years ago, want to have a say in what happens there.

The rapid changes and climatic gyrations taking place at both Poles are due to global warming throughout the world. While the capitalists see the chance for big profits — for example, when the big oil and gas interests in the U.S. see they can use sanctions on Russia to make billions in profits from the German energy market — all their protestations on renewables are ignored in the blink of an eye.

Renewables won’t solve all the problems of global warming. But adopting them quickly will give the world time to develop other, more comprehensive solutions.