March 29 — Recent polls show that a majority of people in the U.S. fear that the current crisis might escalate to a war with Russia, a war they want no part of. (cbs42.com, March 28) 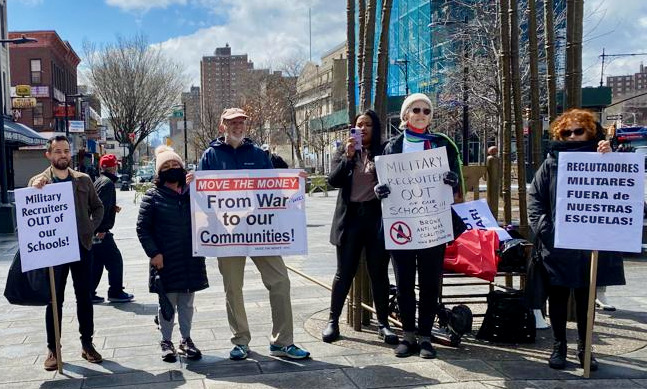 Despite avalanche of anti-Russia propaganda, revulsion for wider war exists among workers in the U.S. Here, protest in South Bronx, New York, March 26.

President Joe Biden’s comments made March 26 in Warsaw — threatening regime change in Moscow — certainly did nothing to alleviate those fears. The taste of danger remained even after his cohorts immediately walked back Biden’s comment. Biden later excused it as “moral outrage” and not a change in U.S. policy.

Moscow reacted with hostility, which is easy to understand. Washington has pursued policies intended to overthrow other governments around the world, succeeding in the last three decades in Panama, Yugoslavia, Iraq, Afghanistan, Honduras, Libya and Ukraine, among others. These overthrows led to imprisonment and/or executions of the heads of state in Panama, Yugoslavia, Iraq and Libya.

Even more dangerous than Biden’s words are the billions of dollars in weapons Washington is shipping to Ukraine in order to use Ukrainian people as cannon fodder against Russia. NATO itself is steadily building up military strength in Eastern European countries surrounding Russia and Ukraine.

“Moral outrage” is an unfitting and hypocritical claim coming from Biden. Biden is the head of state of the empire that first waged 20 years of war and occupation of Afghanistan and then, after finally admitting defeat, imposed deadly sanctions on the government in Kabul.

USA Today reported, “As a result of all this economic disruption [in Afghanistan], including the loss of billions of dollars of aid, 22.8 million people — more than half the population — are facing acute food insecurity. They include a million children under 5 ‘at risk of dying due to severe acute malnutrition,’ according to UNICEF.” (March 10)

Much of the world feels moral outrage against Biden and the U.S. government.

Those in the U.S. who want to prevent a wider war must mobilize to protest both the words and the deeds of the Biden administration. As can be seen from additional articles in Workers World this week on pages 2 and 8-11, Washington is the main force responsible for the suffering in Ukraine — not to mention much of the rest of the world.