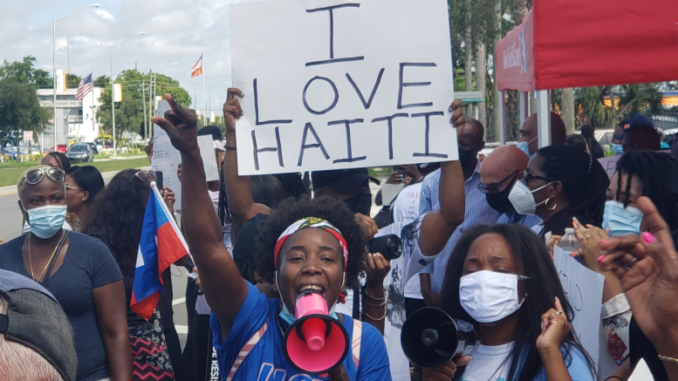 President Joe Biden’s March 25 announcement made in Brussels, Belgium, where he was attending a NATO meeting — that the U.S. would accept up to 100,000 Ukrainian refugees — is all over the news. His welcome exposes again the racist hypocrisy of Washington’s immigration practices.

The number may be small considering reports that 3.5 million people have left or are trying to leave Ukraine — although most apparently prefer to stay in Europe and eventually return to Ukraine. However, Biden’s stance toward Ukrainians contrasts sharply with his refusal to accept refugees and migrants from Latin America, the Caribbean, Asia and Africa.

Since President Biden took office, over 20,000 Haitians have been deported, many of whom had lived in the U.S. for years. Most are being flown back to Haiti under former President Donald Trump’s Title 42, which calls for expeditious deportations on the dubious grounds of reducing COVID-19 spread. Biden has left Title 42 in place, and it has been applied to Haitians apprehended at the U.S.-Mexico border, deporting them instead of allowing them to apply for asylum.

The Haitians are forced to return to conditions of dire poverty, low access to COVID-19 vaccines and political instability since the assassination of President Jovenel Moïse last July. In March hundreds of Haitian migrants, many of them children, arrived by sea in the Florida Keys and were immediately taken into custody by the U.S. Coast Guard.

Other migrants from Latin America, the Caribbean and Africa have fared no better. Since its enactment, Title 42 has been used to deport 1.7 million people, 70% of them under Biden. Flights were just increased in March with a program to “repatriate” Colombians. The president has rejected calls by Democratic senators and representatives to end Title 42.

Pew Research reports: “Overall, nearly four-in-ten Latinos (39%) say they worry that they, a family member or someone close to them could be deported.” The figure is double for Latinx immigrants without legal status. (pewresearch.org)

Title 42 has been used to deport Black immigrants in disproportionate numbers, from Africa as well as the Caribbean. In some cases they have been restrained and shackled. A Cameroonian deportee has charged in a lawsuit that a restraint device known as a WRAP “held his legs tightly straight and together while pulling his head and chest down towards his knees at a sharp angle.” The WRAP has reportedly only been used against Africans. (San Diego Union-Tribune, Oct. 13, 2021)

The millions of crimes against Black, Brown, Indigenous and Asian migrants certainly did not begin with Title 42. When Biden was vice president during the Barack Obama administration, there were some 3 million deportations. Most of those deported had been fleeing brutal political repression and extreme poverty — created by U.S. foreign policy and corporate domination.

For Ukrainians to now be welcome exposes a blatantly racist and xenophobic double standard. It also exposes crass political opportunism since the Russia-Ukraine war began. Before the war, many Ukrainians had trouble getting a U.S. visa. Now Washington’s foreign policy includes using the people of Ukraine, including the refugees, as political pawns against Russia.

No one should be fooled by any fake “humanitarian” gestures by U.S. imperialism, whether in the form of “assistance” or special status for a particular group of immigrants. Remember, all 50 states consist of lands stolen from Indigenous people.