As the U.S. and NATO work to advance their war against Russia now breaking out in Ukraine, many countries who have experienced imperialist aggression — by the U.S., France, Britain and other NATO members — are speaking out. They are denouncing the impact of U.S. sanctions as acts of war and calling NATO the threat to global peace. 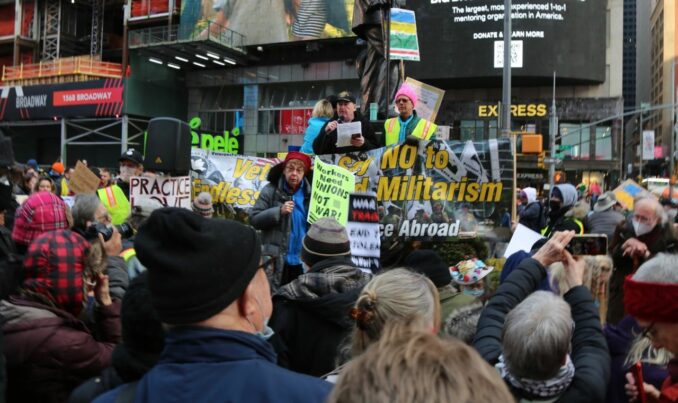 The Bolivarian Alliance for the Peoples of Our America — ALBA — is an intergovernmental organization of countries in Latin America and the Caribbean, based on social, political and economic integration. Many member states have been targets of U.S. intervention and economic sanctions intended to derail popularly elected, progressive governments. Collectively they are speaking out against the U.S./NATO aggression against Russia.

Bolivian Indigenous leader Evo Morales called NATO “a serious threat to international peace and security. Its record of invasions and aggression proves it. Now its expansionist attempt is one of the main reasons for the situation in Ukraine.” In 2019 the government led by Morales was overthrown by a right-wing coup directed by the U.S. A year later Morales’ Movement Towards Socialism party was restored to government in a popular election.

Bolivarian Republic of Venezuela’s Ambassador Samuel Moncada, who addressed the March 2 U.N. General Assembly special session on Ukraine, echoed Morales’ sentiments. “We regret to note that the current escalation, with the painful and terrible loss of life it has entailed, originates from the breach of the Minsk Agreements under the encouragement of the United States of the permanent expansion of NATO toward Eastern Europe.

“Venezuela has always condemned the perverse tendency toward unilateral and hegemonic visions of the world, which disregard the principles of diplomacy, organize invasions with total impunity in countries such as Syria, Iraq or Afghanistan, and promote media shields that limit freedom of expression and manipulate opinions and emotions to increase xenophobia and hate speech.”

Venezuelan President Nicolás Maduro called for talks between Russia and Ukraine and repudiated economic sanctions against Russia. Maduro denounced mainstream media campaigns targeting Russian millionaires as “oligarchs,” asking what U.S. millionaires are called. Maduro repudiated censorship against Russian media, citing a new geopolitical age taking shape. “Despite the empire’s attempt to impose itself with the blackmail of the dollar and the financial and commercial system to impose a unipolar world, a multipolar world of new poles of power has been born.” (tinyurl.com/yckmwzt8)

“I had a telephone conversation with President Vladimir Putin,” wrote Maduro on Twitter. “I confirmed Venezuela’s condemnation of NATO’s destabilizing actions. I reiterated a firm disposition in favor of understanding and dialogue as a way to preserve peace.” Maduro stressed the importance of countering the campaign of lies and disinformation unleashed by the U.S. and other NATO countries. He defended Russian sovereignty over Crimea and supported the demilitarization and denazification of the Ukrainian state, to guarantee its neutral and nonnuclear status. (tinyurl.com/ydp3vuay)

Venezuelan journalist Patricia Villegas Marín, director of TeleSUR, denounced the European Union ban on Sputnik and RT, noting: “in the name of democracy, voices are being silenced. “We at TeleSUR have experienced [this type of blockade] many times at decisive moments in the political life of Latin America and the Caribbean.” 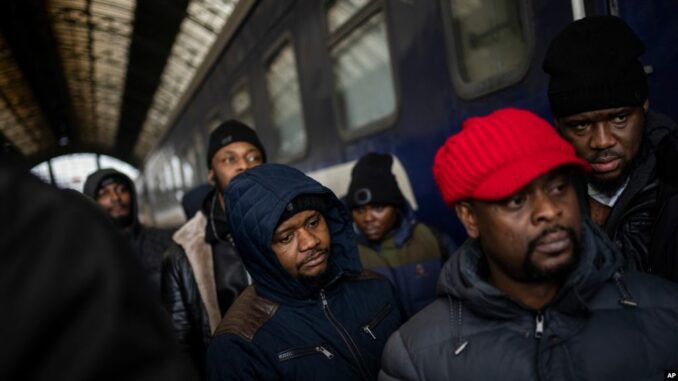 People of color from Africa, India, the Middle East and other regions living in Ukraine were denied access to transportation designated to move refugees to safety, told only Ukrainians were allowed and pushed back at some Polish borders. Here, African residents wait at the Lviv railway station, west Ukraine, Feb. 27.

Addressing the emergency session on Ukraine, Ambassador Pedro Luis Pedroso Cuesta, Cuba’s Permanent Representative to the U.N., stated: “U.S. determination to continue NATO’s progressive expansion toward the Russian Federation borders has brought about a scenario with implications of unpredictable scope, which could have been avoided. The United States’ and NATO’s military moves in recent months toward regions adjacent to the Russian Federation, preceded by the delivery of modern weapons to Ukraine, which altogether add up to a military siege, are well-known.

“Ignoring for decades the well-founded claims of the Russian Federation for security guarantees and assuming that Russia would remain defenseless in the face of a direct threat to its national security was a mistake. Peace cannot be achieved by sieging or cornering States. History will hold the U.S. accountable for the consequences of an increasingly offensive military doctrine outside NATO’s borders, which threatens international peace, security and stability.” (tinyurl.com/4e6b4ww9)

Nicaragua’s representative to the U.N. Orlando José Tardencilla laid the blame on the backers of the 2014 coup d’état in Ukraine and the attacks and bombings against the populations of Donetsk and Lugansk.

The ALBA countries were not alone in opposing the U.N. vote condemning Russia’s invasion of Ukraine. The U.S.-backed resolution passed with 141 votes in favor, but there were five no votes and 35 abstentions. Abstainers included China, India, Iran, Iraq, Mozambique, Pakistan, Senegal, South Africa, Uganda, Vietnam and Zimbabwe. Half the states that voted to abstain or did not vote at all were African. Belarus, Democratic People’s Republic of Korea, Syria and Eritrea voted with Russia to reject the motion.

In analyzing the vote, David McNair, Executive Director of Global Policy, noted “Of the 7.7 billion people represented by governments taking part in the vote, only 42% were from countries approving the motion.” Many of those abstaining are countries who have suffered under crippling U.S. economic sanctions — another act of war.

The Ukrainian authorities’ racist treatment of African students studying in Ukraine when they sought to leave the country speaks volumes. African countries will certainly face U.S. pressure for refusing to condemn Russia. But that didn’t stop a demonstration in the Central African Republic’s capital Bangui, where hundreds of participants called for the end of NATO and the end of U.S. hegemony and imperialism.